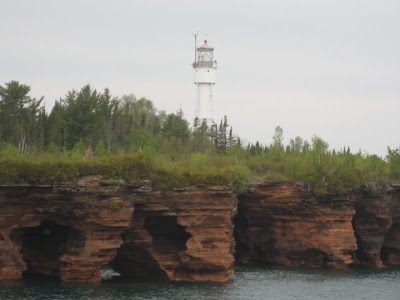 I left the campground early in the morning and made my way up to the charming little harbor town of Bayfield, WI, for my 3 hour cruise around the Apostle Islands.

I approached the counter of the Apostle Islands Cruise Service, behind which stood the manager (of course she's the manager - she's also the clerk, the reservation taker, the operator, etc - it's a very small town!) sporting a crisp, white Sea Captain's uniform, lol. I love when places go all out! I thought she was so cute until she told me there had to be 16 people for the [real] captain to take the boat out - only 13 people had reservations, and of the 13 reservations, only THREE people had arrived - and that number included me! Anyway, I came back 15 minutes later (a few minutes before the boat was scheduled to depart the harbor) per her request, and thank goodness she said we were ready to go - almost everyone had arrived and payed and and 13 out of 16 people was good enough for them. Ahh, relief.

Anywhoski, the islands, well...they were islands that looked just like islands usually do, lol. There are 22 islands that make up the whole lot, and when you've seen the first couple you've pretty much seen them all. They were different shapes and sizes of course, but all made up of the same vegetation, animal species, sandstone rock, etc. Now don't get me wrong - it was a beautiful, sunny day on Lake Superior, a relaxing boat ride with good captain/narrator, a very handsome captain's son, and of course the lush green islands. There are TWO islands that are special. Madeline Island is one. Of the islands, it's the only one that actually has year-round residents (a whopping 220 of them). It has its own restaurants, shops, etc. It's only a 20 minute ferry ride from the mainland. The other special island is the best one - the one they saved for last on the cruise tour: Devil's Island. Yeah, baby! It's actually the northernmost point of land in Wisconsin, and rises about 60 feet above water level. What's cool about the island, other than its remoteness, are the sweet sea caves which undercut the shoreline. In some places, the red, sandstone cliffs on the northern half of the island look honey-combed (on a grand scale).

After the cruise I headed down to High Cliff State Park in in Appleton, WI, where I stayed just for the night, and since it was late, the park office was closed, and the fees were way more than they quoted me on the phone, I just slept there that night and left real early in the morning. Not proud of not paying, but there were lots of spots and I figure I did no harm. High Cliff State Park by the way is beautiful! Lots of woods and shaded camp sites, and lots to do. They have a general store, a nice beach, and it's not too far from town - although getting into town is a maze with all the roundabouts!