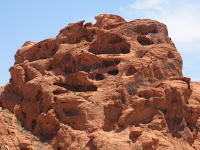 I dropped Akihiro off this morning and I went to Valley of Fire State Park, "Nevada's oldest and largest state park, dedicated in 1935," located about 50 miles northeast of Las Vegas. "The valley derives its name from the red sandstone formations and the stark beauty of the Mojave Desert. Ancient trees and early man are represented throughout the park by areas of petrified wood and 3,000 year-old Indian petroglyphs!" 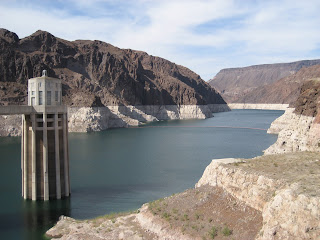 As I drove along Lake Mead I began to think about Akihiro and if I had done the right thing to respect his wishes of leaving him in Vegas and let him rent a car and drive to the Grand Canyon himself.  His eyes lit up when I agreed to have him come with me, but he ultimately decided to go it alone when I told him I couldn't drop him off at the airport until after about a week of other stuff I wanted to do after Grand Canyon.  Anyway, I hope he's able to get there; I know how excited he is.  I stopped at "Lake Overlook" near Hoover Dam, for a stunning view of Lake Mead, before visiting the Hoover Dam, which was awesome.  My $11 admission got me into the great visitor center and exhibits, a viewing of their informative video, a good look at the hydroelectric facility down inside the dam, and astounding views of the dam itself and Lake Mead behind it.
PHOTOS
Valley of Fire State Park
Lake Mead & Hoover Dam