Friday, May 27th
I left Yosemite National Park and got to my friend Justin's new place in Oakland around 6pm and he and his boyfriend Jim and I went to the grocery store and came back and cooked a delicious shrimp pesto tortellini with portobello mushrooms and sundried tomatoes, had some wine, and watched "Riff Tracks" of Harry Potter and the Order of the Phoenix, a version of the movie in the style of Mystery Science Theater, with hilarious movie commentators in the background talking over the actors.
Saturday, May 28th 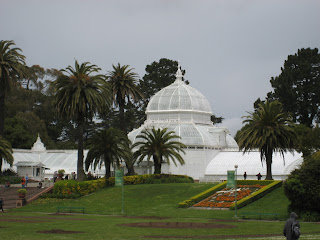 This morning Justin & Jim and I hopped the Bart (Bay Area Rapid Transit) and explored Golden Gate Park in San Francisco.  First we visited the oldest remaining municipal wooden conservatory in the United States, the Conservatory of Flowers, where we admired the beauty of the Lowland Tropics (a steamy jungle of plants that are native to the low-lying tropical forests of countries such as Mexico, Brazil and Indonesia, in regions below 3,000 feet - banana and coffee trees, etc), Highland Tropics (an intimate glimpse of life in the cloud forests of the tropics above 3,000 feet - orchids, mosses, etc), Aquatic Plants (from the Amazon River to Mekong, the waterways of the tropics are crowded with floating aquatic plants like water lilies and lotus), Potted Plants (assortment of hibiscus, begonias, bromeliads, cymbidium orchids, vines, etc), and my favorite special exhibit "Wicked Plants," an eerie garden full of Mother Nature's most appalling creations, based on the New York Times Best Seller. 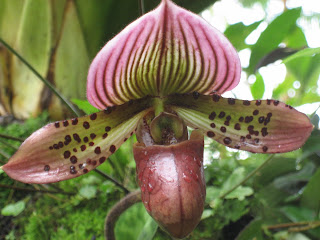 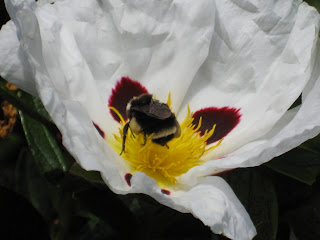 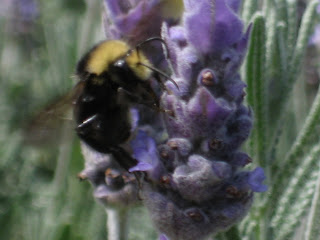 Next we visited the San Francisco Botanical Garden, more than 7,500 varieties of flora from across the globe, stretching across 55 acres.  We walked through the Ancient Plant Garden (“primitive” plant garden, which offers millions of years of change) and the Rhododendron Garden before I met my friend Bonnie from Minnesota who was visiting her sister who lives in Marin County. 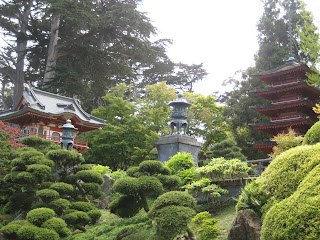 It was Bonnie's birthday today!  I met her and her son, her sister, her sister's husband and nephew (it was his birthday, too!) at the north gate, and we walked over to the Japanese Tea Garden, the oldest public Japanese garden in all of the United States, where we walked through the lush, peaceful pathways passing rock gardens, Buddhas, temples, crawled up the Drum Bridge (which reflects a perfect circle), then had tea and cookies at the Tea House.  It was so great seeing Bonnie, who after battling cancer is looking and feeling great, her smile brightening everyone's day as it always has, and it was wonderful meeting some of her fun, generous family, who insisted on picking up the tab and offered me their place to crash :)
Afterward I met back up with Justin & Jim who opted to stay at the Botanical Garden, while I caught up with Bonnie.  It started to rain again (off and on the throughout the day), so we hopped the bus and the Bart back to Justin's, where we finished the leftover pasta from last night and the Happy Potter Riff Track movie (so funny!).

Sunday, May 29th
The first half of today was spent in rest and relaxation; I picked up an ear-bud for my cell phone, did laundry, enjoyed a delicious vegetable stir fry lunch Justin prepared for us, and then later we too the Bart to downtown Berkeley, where we window shopped the Games of Berkeley store, I grabbed a little Ben & Jerry's, walked Center Street to the grounds of the famous University via Frank Schlessinger Way to the Campanile (Sather Tower), a Venetian, 16th-century replica clock/bell tower - the symbol of the campus, then strolled through Sather Gate onto Sproul Plaza, a famous location for student protests (the first of which occurred in 1964 during the Free Speech Movement), then onto the lively sidewalks of Telegraph Avenue.  We checked out the funky T-Shirt Orgy store - a 3-level store filled with every kind of t-shirt you can imagine, then a Japanese dollar store (Justin teaches Japanese, so it's always fun shopping with an expert!).  We walked up busy Shattuck Avenue to a Dollar Tree, then I picked up a Mad Libs (America's Next Top Model edition, lol) at Half Price books before we noshed on yummy wood-fired pizza alfresco at Jupiter, two-story beer-house with great patio and live music, where we tried the "Odysseus" - wild mushrooms with danish fontina cheese on an olive oil-brushed crust, and listened to a folk-country/bluegrass band.
When we got back to Justin's we watched "Kung Pow: Enter the Fist," an off-the-wall comedy "movie within a movie, created to spoof the martial arts genre."
Monday, May 30th 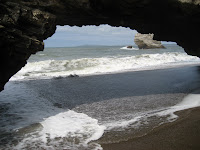 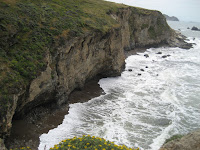 This morning around 9am I drove about an hour away to Point Reyes National Seashore, "the windiest place on the Pacific Coast and the second foggiest place on the North American continent.  This peninsula is a popular recreational destination for the nearby San Francisco Bay Area, especially for hiking on its many trails and sea kayaking the shores of Tomales Bay and the coast. Point Reyes National Seashore offers some of the finest birdwatching in the United States, It is also one of the best places to watch Northern Elephant Seals in the winter months."
I grabbed a map and information from the long-winded woman at the Bear Valley Visitor Center, lol, and began my visit with a short .6 mi/1 km hike along the paved Earthquake Trail loop that explores the San Andreas Fault Zone with interpretive signs describing the geology of the area.  The most interesting part of the hike is seeing where a fence jumped 16 feet during the 1906 quake.  Other than that, you can probably skip this one. 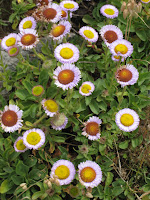 Then I hiked Bear Valley Trail to Arch Rock, an 8.2-mile out and back hike, "probably the single most popular trail in the park, with the most direct walk to the ocean from the Bear Valley Visitor Center. This pleasant stroll through mixed Douglas fir forest and along Bear Valley Creek is mostly sheltered from sun, wind and coastal fog."  The hike was nice and easy, but pretty unchanging most of the way.  It took me 3 hours round-trip at a fast pace.  The natural sea arch at the end is neat, and the views of the ocean and coast are good.  I had lunch under a tree looking onto Divide Meadow on the way back.  Next time I'll try Tomales Point Trail or one of the others. 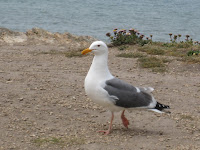 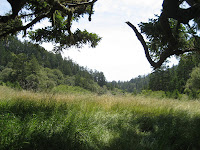 Next I drove through old, active livestock ranches past several milk cows to the Point Reyes Lighthouse, built in 1870, retired from service in 1975 when the U.S. Coast Guard installed an automated light to save money (as is the case now with all lighthouses in the U.S.).  I walked about 3/4 of a mile from the line of cars backed up onto the shoulder of the road down from the small, overflowing parking lot, and down the narrow staircase of 308 stairs to the little old lighthouse 300 feet below the top of the cliff.  It is now a museum piece, "where the era of the lightkeepers' lives, the craftsmanship and the beauty of the lighthouse are actively preserved."  You can enter the lighthouse from 2:30-4:30 and hear a ranger talk, as I did.

Upon leaving the lighthouse area I drove the narrow road to nearby Chimney Rock, and hiked a little footpath to Elephant Seal Overlook, where I had the opportunity to see the large colony resting on the beach flipping sand onto themselves, and powerfully trumpeting while horse-playing in the water.  This was the highlight of my visit! 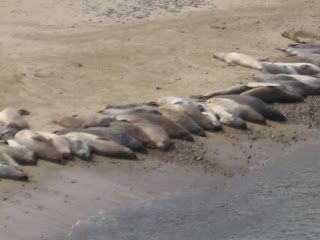 Then I drove down to Limantour Beach, a long, narrow spit of sand and bountiful wildlife area, bound between Drakes Bay and an estuary (so pretty, and my favorite part of the beach).  My travel book described this beach as picturesque, but after a little research, I think I should've tried Drakes Beach, instead.

Before returning to Justin's, I had dinner at Farm House Restaurant in Olema, bordering the park.  My guidebook hyped up the enormous bbq oysters, "a famous regional delicacy" the place supposedly serves up; a dozen for $18.  Well the oysters were good, but there's no 12 for $18 and they're nowhere near the size of the palm of one's hand.  "Barbequed Drakes Bay Oysters" are twelve [typical-sized] oysters for $29 (ouch!), with a choice of Sartain's Sauce of Petaluma (spicy chipotle), Mango-Bourbon Barbeque Sauce (hot 'n tangy), or Roasted Garlic Butter (very light flavor).  My request of all three sauces was happily accommodated, but a little overkill as usual (I heart condiments).  I have no idea what plain oysters taste like.  Maybe I need to learn to pull the reigns in a little, lol. 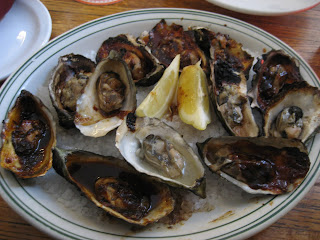 
Tuesday, May 31st
This morning bright and early I packed up and said goodbye to my good friend Justin before he went to work.  Before leaving the bay area, I stopped at "Albany Bulb," a former landfill on a peninsula, to check out the sculptures mentioned in my "Weird U.S." guidebook.  "Because the Bulb is geographically unorganized and seldom patrolled by the Albany Police Department, it is often described as Anarchical. Many groups, including urban artists, local homeless, dog-walkers, teenagers, and environmentalists, use the Bulb area and feel they have a stake in it."  The bulb supposedly contains "a vast array of urban art including mural, stencil, graffiti, sculpture, and installation art."

The place is sketchy, so I parked my car a safe distance away, and walked a portion of the Waterfront Trail overlooking The Albany Mudflat to a large sculpture with graffiti reading "Look Out," and I knew I was in the right place.  I asked a gentleman on his bicycle where I should go from here, and he pointed accordingly and informed me the place isn't what it used to be, with much of the art not still intact, and that the place is inhabited by homeless.  He said if I play it cool then they'll play it cool.  I did some exploring but finished a lot sooner than I had originally anticipated, feeling a little uneasy and unsafe.  In short, you can skip this place. 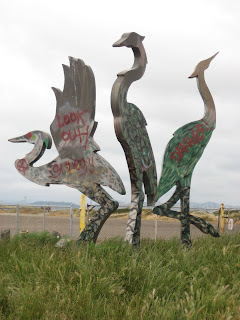