Wednesday, August 31st
This morning after saying goodbye to Kat on South Padre Island, I blogged a bit and sent out a couple of couch-surfing requests, before hittin' the road.

North Padre Island is not accessible from South Padre Island, so I backtracked up Highway 77 about 170 miles.  I came to a border patrol checkpoint, which must have been closed when I was on my way down to South Padre.  I saw dozens of vehicles pulled over to the side of the road, and after my painful attempt crossing over into Canada, I feared another 30 minute invasion of privacy.  However, to my surprise, the officer was in a good mood and treated me with respect - and still apparently managed to do his job effectively, without being a jerk.  I answered some questions and was on my way - yippee!


Like on my way to South Padre, I stopped at the nice rest stop with shaded picnic shelters and memorable murals in the bathrooms, lol.
Entering North Padre Island over the long causeway was much like entering South Padre Island, but with less color and tourism; just quieter and more serene.  At around 4:45pm  I arrived at the Malaquite Visitor Center on the Padre Island National Seashore, "which protects the longest undeveloped stretch of barrier island in the world!"  I briefly chatted with the park ranger before closing time, and was given a couple of identification charts for collecting shells and sea beans (I found a "Tropical Almond" one!).  Sea beans "are seeds and fruits that are carried to the ocean, often by freshwater streams and rivers, then drift with the ocean currents and (hopefully!) wash ashore."  Neato!

I snapped a few photos from observation deck (looking out over the dunes, grasslands, and Gulf of Mexico) and read a couple of alarming disclaimers about syringes and drums of toxic waste that are known to be found here.  If that wasn't enough, making my way past the outdoor showers I came upon signs warning of jellyfish and stingrays!  This is a beach?!  After finding a sea bean I did work up the courage for a dip in the ocean, but it was cut short when I saw oil drilling rigs in the distance.  Sorry, but this is not my idea of a nice day at the beach.  There was actually one other set of people on the beach, a family with kids who didn't look bothered by all the warnings and oil drills.

After I had my fill of "fun in the sun," I rinsed off all the god-knows-what (shower room open 24 hours - cool!), and headed down the road a little ways to Horses on the Beach, for a wonderful sunset horseback ride on Mustang Island!  Apart from me and the guide, there was only two other people along, a friendly couple from Jackson, Mississippi, who were in the process of relocating to nearby Corpus Christi, since the husband was just stationed at the Naval Air Base there. 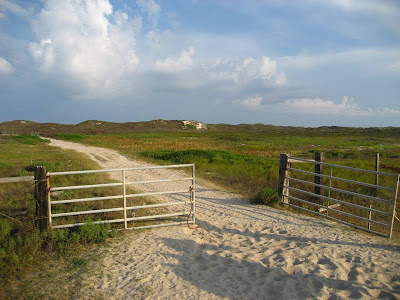 Each horse lets its own personality shine - as the husband's horse named "Warrior" turned out to be no warrior at all, but rather let itself get kicked, shoved and bitten by the other horses, and my horse named "Hobo" let us all know he had a mind of his own, and would do whatever he wanted, namely including stopping what seemed like every 5 minutes to eat, pee, and poop.  Oh, and as it turned out he was very easily startled - once by the noise of a beach-goer behind us, and second simply by my cowboy hat which I rested on my lap, which caused him to bolt towards to the water!  Not wanting to be carried into the sea at lightning speed, I voluntarily let go and picked myself up off the ground.  Hobo and I quickly reconciled, I literally got back onto the horse (haha), and I respected his edginess the rest of the ride.  It was a beautiful sunset and an unforgettable experience!

After the ride I drove to Corpus Christi and sat at the Starbucks in the Barnes & Noble, and unfortunately found my couch-surfing requests unanswered.  Well, I sent out a handful of last-minute requests; the worst case scenario being sleeping in my car or camping on the humid beach - nothing I haven't already done, no biggy.  Luckily, a guy named Lee, a 21 year-old med student, came to the rescue and invited me to share a late-night dinner with him and his friend.  The 3 of us had a fun time getting acquainted as I bantered with the quirky waitress.  Lee let me spend the night and he was incredibly hospitable.