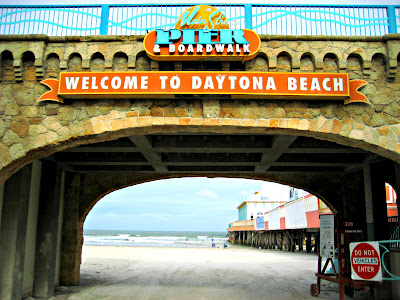 Daytona Beach would otherwise be your typical Florida oceanfront tourist town, complete with pastel-colored art deco souvenir shops on every corner, if it weren't for the biker-bar, NASCAR twist.  Despite its reputation as a party town, it has been a popular family vacation destination for more than a century, though it was more speedway than beach in the early days of the automobile, when between 1903 and 1935 some 15 speed records were set on the hard-packed sand racecourse.  Nowadays, cars can still be driven on the ocean beach during the day, but no more than 10 mph, and after paying a beach access toll of $5. 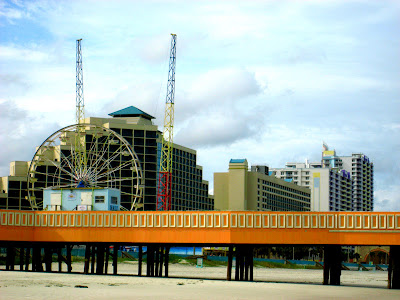 Daytona Beach is a year-round family-friendly resort area, drawing over 8 million tourists a year, but could also accurately be called a seasonal town, with large groups of out-of-towners descending upon the city for various events, most notably Speedweeks in early February when over 200,000 NASCAR fans come to attend the season-opening Daytona 500. Other events include the NASCAR Coke Zero 400 race in July, Bike Week in early March, Biketoberfest in late October, and the Rolex 24 Hours of Daytona endurance race in January. 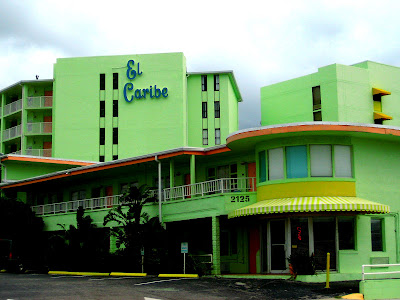 I rolled into town yesterday evening, went to Burger King, got a cherry icee, discovered their wi-fi didn't work (note to self: order AFTER verifying operable internet!), grabbed a coffee (why don't I ever remember to order iced tea?!) at Starbucks across the street, and waited 'til it was time to meet Asheev my cool couchsurfing host.  I met him at his place, we grabbed some gyros at Mediterranean Experience and sat on his front porch (interesting people watching!) stuffing our faces as we got acquainted and talked about a wide range of subjects, pausing for his roomie to urgently discuss with us about obtaining a free toilet plunger, LOL.  I suggested he borrow one from a nearby gas station/convenience store and leave one of his shoes as collateral, lol, but he made other plans. 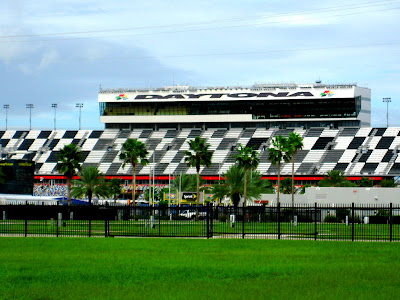 This morning his other roomie (I forgot her name), a very unusual type (think conspiracy theorist cat lady in her 40s-50s), came down to the kitchen and relentlessly chatted me up while I made her breakfast (yes, she asked me if I could make her breakfast too, LOL).  She followed me into the living and carried on until about 10:30 when she literally followed me out the front door and continued talking as I walked to my car and, after several attempts, got in it, lol, and raced (giggle) to the world-famous Daytona International Speedway, home of the Daytona 500 since its opening in 1959, one of the most prestigious races in NASCAR.  With 8 major race weekends a year, the track also hosts races of ARCA, AMA Superbike, Grand-Am and Motocross.  The track features multiple layouts including the primary 2.5 miles (4.0 km) high speed tri-oval, a 3.56 miles (5.73 km) sports car course, a 2.95 miles (4.75 km) motorcycle course, and a .25 miles (0.40 km) karting and motorcycle flat-track.  The track's 180-acre (73 ha) infield includes the 29-acre (12 ha) Lake Lloyd, which has hosted powerboat racing.  When races aren't scheduled, the 480-acre complex is used for vehicle testing and development, guided tours, and automobile shows and events. 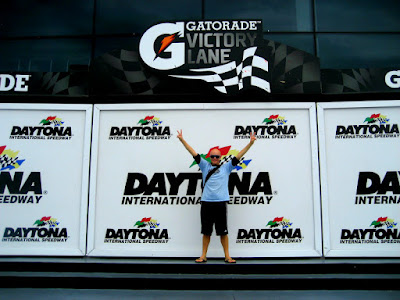 I paid $15.96 +tax for the 90-minute "All-Access" Track Tour ($5 student discount!), which runs 10:00am-3:00pm every hour on the hour, on a first-come, first-served basis.  I was surprised at the number of people on the tour (about 30 of us), considering it was 11am on an off-season weekday.  I hopped onto the open-air, covered, tram-type vehicle and ventured "behind-the-scenes" to the Press Box (where we got a bird's-eye view of motorcycle drive tests as our tour guide gave his talk), talked to a friendly German couple as we crossed the track to the Drivers Meeting Room (photo opp behind the podium!), checked out the souped-up motorcycles getting tweaked in the NASCAR Sprint Cup Series Garages, and got my photo taken like a champ on the Gatorade Victory Lane platform.  The tour concluded inside a theatre (which leads into the souvenir shop of course) which continuously shows a short montage of various clips celebrating Daytona’s rich racing history, and a close-up look at Jamie McMurray’s 2010 DAYTONA 500 winning car. 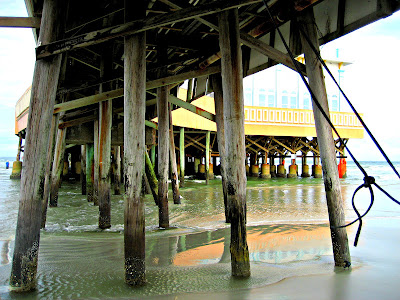 
I reluctantly ordered a tuna sandwich from Subway down the street (the employees were rude and sickly, coughing/sneezing all over the place as they ignored me standing at the counter waiting for service for several minutes), then drove around and explored, and cashed in coupons for free souvenirs (key chains and little sand dollars) from the chamber of commerce booklet I got at the visitor information booth at the speedway.  Then I hit up the "World's Most Famous Beach," where I relaxed until nightfall, watching the surf and bantering with other tourists and friendly locals alike, over happy hour fries, guacamole, chips and salsa and vodka cocktails at Ocean Deck Restaurant & Beach Club, and lazily letting time slip away as I drifted into and out of sleep on my beach chair, firmly nestled into place amongst the 23 miles of beautiful white sand...

Night fell and the cold set in, so I snapped a few pictures of the large, brightly-lit ferris wheel and adjacent towers hoarding the immediate skyline behind me, and returned to Asheev's, where I nearly lost my tongue after trying just a drop of Dave's Gourmet Insanity Sauce - OUCH!