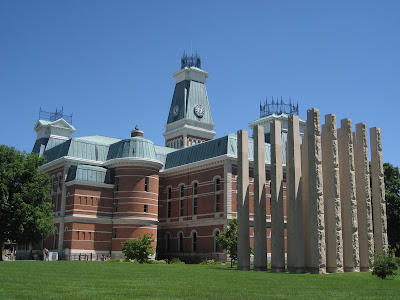 "It is said that architecture is frozen music, wrote Lady Bird Johnson, but seldom in history has a group of devoted artists produced such a symphony in stone as presents itself to the eye in Columbus."

"The former First Lady echoed the praise of architecture lovers around the world when singling out the 20th-century wonders of Columbus, a small city in rural southern Indiana.

The momentum had begun. In 1957, local industrialists J. Irwin Miller offered to pay the fees for A-list architects to work with the community in creating a showcase of modern architecture. The results have been astounding; Harry Weese, Robert Venturi (who created the fire station in 1966), Richard Meier, and their peers joined the parade.

Today the mostly middle-class city of 40,000 people is proud of highlights such as the Cleo Rodgers Memorial Library, designed by I.M. Pei in 1969. On the tree-shaded plaza in front of the library (and across from the First Christian Church) is the monumental stone Large Arch by Henry Moore. Nearby, Gunner Birkerts' design for St. Peter's Lutheran Church showcases a circular sanctuary with a skylight and stunning copper spire that can be seen for blocks. Swiss artist Jean Tinguely's Chaos I, a 30-foot, 7-ton kinetic sculpture made of junk machinery, is the centerpiece of a downtown shopping mall and indoor playground park known as the Commons, built in 1973 by Cesar Pelli.

In a survey several years ago, the American Institute of Architects ranked Columbus sixth in America for architectural innovation and design (just behing urbann heavyweights Chicago, New York City, San Francisco, Boston, and Washington, D.C.). See for yourself by taking a guided one or two hour architecture tour, which departs from the Columbus Area Visitors Center. (While you're there, look up: You'll be dazzled by Dale Chihuly's Yellow Neon Chandelier, made with 900 pieces of delicate handblown glass). Across the street, the Columbus Inn, built in 1895, served as City Hall for a century before its present incarnation as a historic B&B. The elegant, antiques-furnished inn has 29 rooms and 5 suites and is a perfect home base for strolling around town. Try not to hold its grand Romanesque architecture-decidedly unmodern, after all - against it."

For breakfast I had a FIVE "dip" sundae (in Indiana scoops are called dips) at Zaharkos (a seriously world-class, old world ice cream parlour built originally as a candy store by three Greek brothers in 1900) - all different flavors, it was piled so high with ice cream, whipped cream...mmmm.  Later after getting laid [off from my job, lol], I took the bus tour (waste of money, there was no way to take pictures!), which I took as a way to give me and idea of what I wanted to revisit on my own later on,  then afterward I grabbed a self-guided tour map from the Visitor Center, opened it up and went WHOA. SO many sculptures and structures to see...I wasn't able to see every single one, but almost all of it anyway =) Who would imagine to find such a wonderful world of architecture and innovation in a small town basically set in the middle of a corn field?!


Inside the North Christian Church:


Letter from a Vietnam soldier on the War Memorial: