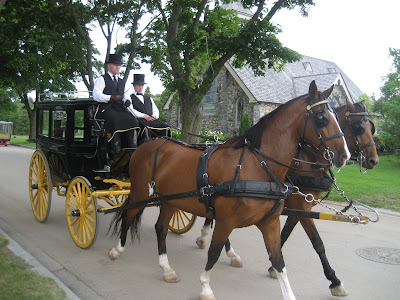 When I got into Mackinaw City this morning I helped jump a woman's car. Karma points, hooray! I couldn't believe it when she said she had asked another fellow first, who told her he didn't have time to dig out the jumper cables buried in his trunk. Have no fear - Good Samaritan Matthew is here, yeehaw!

Then I hopped onto Star Line's Hydro-Jet Ferry, which boasts panoramic views of the Straits that includes the Mackinac Bridge, and produces a distinctive 35' roostertail spray!

And I'm at Mackinac Island...who can forget stepping onto the island and catching that first whiff of horse manure? One which really puts the STINK in distinct. Eh hem [clearing throat], er, I mean, Mackinac Island: "vehicular traffic replaced by horse-drawn carriages, Victorian architecture, incredible rock formations, majestic views and historic ambiance combine to make Mackinac Island a destination unlike any other." LOL.

After reconciling the sweet stench of horsie poo, one can let their hair down (granted they have any), kick back, and stroll the beautiful cobblestone streets, lined with historic fudge shops, inns and gift stores. I picked up some post cards (will I ever get around to sending them?), and meandered the streets with the other wide-eyed pedestrians, bicyclers and horse-drawn carriages. I checked out the historic fort on the beautiful lawn overlooking Lake Michigan, peeked into the old homes of the early settlers and fur traders, and strolled the paved paths of the state park, which encompasses 80% of the island.

As you approach the Grand Hotel, one cannot help but notice the indeed grand gardens and grounds and the imposing pillars of the historic hotel. One cannot also help but notice the signs notifying you of the $10 fee which must be payed to step one foot inside. Of course, I walked in, lol, and was immediately [we'll say] greeted by an hotel employee who asked me if I was a registered guest. I stated no I wasn't, but that I would like to take a look into a guest room to decide on a future stay (this is how I negotiate self-guided tours, lol). She snobbishly replied "no, there are pictures in here," and handed me a generic brochure. I placed the brochure on her desk and said, "I won't be needing this." Upon exiting the hotel I called and informed the front desk agent that my request to view a room was denied. They said, "Yes, the only ones that are allowed into the rooms are the guests," and she directed me to their website to place a reservation. Grrr. With [lack of] service like this, it is one hotel I shall have absolutely no interest in ever staying.

I continued walking and looped back towards the harbor of the island where I reached the cutest little library, grabbed a magazine and kicked back on their seaside deck, overlooking families flying kites, a lighthouse, and the shoreline.

When I arrived back at the mainland, I headed for Traverse City, where I would stay for the evening. Arriving in the city, I chatted with my good friend Alida, then went to a Arby's for internet access. I ordered the least expensive thing on the menu, grabbed a table, opened my laptop, and my attention was immediately stolen by a woman wearing a head-to-toe gypsy costume, ordering a coffee. I looked her over, looked at the people looking her over, lol, and smiled. *Was this a costume? I love meeting interesting people. We shall see. A couple of moments later I walked on over to her table where they had brought an extension cord over to her, and she pleasantly allowed me to take a seat. She immediately started telling me her story, about how she was fired from her job at the hospital, had her daughter taken from her, renounced her U.S. citizenship, and, after learning of my trip and tight budget, invited me to stay the evening in the subdivision building that she's not supposed to live in. She said I could arrive after 1am when she would be getting back from the concert she's going to, or I could sneak in through the basement window. It was sincerely a very kind offer, and the first stranger to make such an offer. She also gave me some tips on traveling cheaply, like pulling into a campground and simply asking to park there for the night for a few bucks, and that I should consider showering at civic centers that have pools. I finished checking my email and collecting local lodging info and said my goodbye and well-wishes to the gypsy-attired acquaintance I had made.

So now the fun begins...finding free lodging. I tried a nearby state park, where the attendant refused me free parking. I continued searching, drove out of town a few miles, and found a luxury RV park. Yay! I parked where it said no overnight parking, entered the RV park office, which was open, unattended, and had private showers. Perfect!

I went back into town and checked out a local gay bar which, as I had assumed, being only 8:30pm, was deserted, lol. Most of the bar/club-hopping gays I know don't go out until 10. That's okay, I was a little too tired for sampling the local nightlife anyway.

I had second thoughts about the RV park, so I started driving around and didn't get far before I entered the parking lot of a grocery co-op where I found a young woman and her child walking toward my car. She said she forgot her keys in the store, which was now locked, and the store clerk inside dismissed her. I handed her my phone which she used to call the police (karma points!), and when they arrived and the situation started getting sorted out, I resumed my free lodging search.

I scouted hotels and found the perfect spot at the Hampton Inn chain. Safe, quiet, not too bright, and a parking lot that, apart from the explicit signs, said to me, "park here." I did just that, and rearranged the backseat to accommodate the passenger seat folding down, grabbed my eye mask to shut out the light, locked the door, and tried my best to sleep in my car in the nomad-not-wanting city of Traverse. Eventually the noise of the closing car doors and teens puttering about outside faded, and I awoke the next morning feeling rested. I cleaned up in a Wal-Mart bathroom a few miles away, got gas and set out for Grand Rapids.

*It was not a costume.