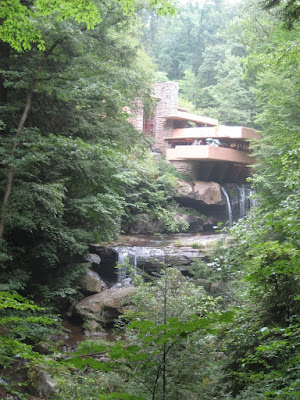 I left the camp site early in the morning. I hadn't slept well, but I had gotten a nice shower the night before and it was great just to be in the woods without any city noise or bright parking lot lights shining down on me. And there was a thunderstorm and heavy rains, which was heaven =)

It's a shame to have to sneak in and out of a state park. State Parks are built and maintained with tax-payer money, then they charge permit fees and usage fees? That's like going into a public library (built and maintained with tax-payer money) and being charged an admittance fee to enter the building and a fee to check out a book. How dare they try to collect twice?!

I started a 5 hour drive to Mill Run, Pennsylvania, where I would see House of Falling Water. On the way, I stopped at a super busy Starbucks to check my email, etc. I saw that a couch-surfing request I had sent to a guy in Albany, NY had been accepted! Exciting! All morning I tried to get through to someone at House of Falling Water to check on tour availability. This is a tour that they recommend advanced reservations for. However, flying solo, I've found that I'm often able to do things like this on short or no notice =) Every time I called the line was busy and had a very, very poor connection on their end. Finally I was able to get through to someone and through the terrible connection, make a reservation for late afternoon. I would arrive ASAP and try for an earlier tour, which is precisely what happened =)

Fallingwater is a house designed by American architect Frank Lloyd Wright in 1935 in rural southwestern Pennsylvania, 50 miles southeast of Pittsburgh. The home was built partly over a waterfall on Bear Run in the Mill Run section of Stewart Township, Fayette County, Pennsylvania, in the Laurel Highlands of the Allegheny Mountains.

Hailed by Time shortly after its completion as Wright's "most beautiful job," it is also listed among Smithsonian's Life List of 28 places "to visit before you die." Fallingwater was featured in Bob Vila's A&E Network production Guide to Historic Homes of America. It was designated a National Historic Landmark in 1966. In 1991, members of the American Institute of Architects named the house the "best all-time work of American architecture" and in 2007, it was ranked twenty-ninth on the list of America's Favorite Architecture according to the AIA.

Even the check-in/cafe/art gallery/gift shop area was stunning. An unusual design, feeling like a tree house in the forest, the Swiss Family Robinsons would be impressed, too. My group number had been called and I descended the wooded path leading down to the house, where we all gathered for the intro from our tour guide. Like the other Wright properties I've visited, there was very limited photography allowed, but the tour was great. The house was beautiful, and, being perched up over a water fall, was like something from a dream.

After the tour, I drove, and I drove, and I drove, keeping Cory, my first couch-surfing host, updated with my ETA, and eventually meeting him at his house in Albany, NY at approximately 10:00 pm. He welcomed me in, we got acquainted, he showed me where everything was, then we were both off to bed. This was so cool. A guy with a big heart opening his home up to a traveling stranger, for no reason, other than because he can. Okay, so I admit my bed smelled of cat urine, but hey, it's a bed, it's a roof over my head, it's a shower, and it's the noble intention that counted, and I am very grateful.