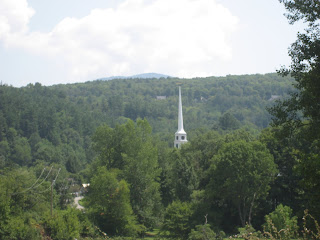 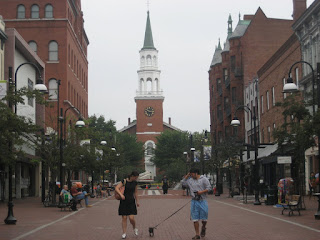 8/9/2010
This morning Adam helped bring my things down to my car, and we said our goodbyes.  I felt like we had been friends a lot longer, like friends you make at summer camp.  It's been an awesome 3 days; I hope I have the opportunity to return the favor for him someday.  Thank you New York!

I spent the next half hour battling the construction detours before I finally found a gas station and filled up, lol.  I then made my way to Vermont, my first destination being Mount Equinox, with an elevation of nearly 4,000 feet, I put my car to the test, and made it up and down the mountain with no problems.  On the road up the mountain, one can spot the first monastary built in the Western hemisphere, built by the Carthusians.  At the top of the mountain, you can follow lookout trail that provides awesome views of Manchester, VT - my next destination.

I entered Manchester, settled in 1761, and stopped for a glance at "Hildene," Robert Todd Lincoln's summer home (Abraham's son).  It was was at the gift shop where I spotted the true gem - the 1928 Franklin Roadster, which won Best of Show by the Sports Car Club of America in 1973.  And where else but Manchester can you stroll the sidewalks and find marble below your feet?  Thanks to their own marble quarry, it is common.  Fly-fishing is popular here, and I stopped to watch people taking lessons at a local spot.  On my way out of town I couldn't help but notice a body of water surrounded by big boulders of marble, where the locals were swimming and sunbathing on this gorgeous summer day.  It was the marble quarry, the first one in the U.S. (1785) in fact.  And while it looked out of commission, it was serving as the perfect place to throw on your swim suit and play which is exactly what I did =)

Taking the back-roads I sampled a bit of the local life as I passed by all the little farms that comprised the towns on the way to Burlington.  In Waterbury I visited the Ben & Jerry's factory, where for only $3 I read up on its history, got a tour, and sampled the day's free flavor - mint chocolate chip.  As our group looked over the workers running the equipment that make this delicious stuff, a woman to my left turned to me and said, "Kid, you got movie star eyes."  [Insert BIG SMILE here.]  You wouldn't happen to know a good agent, would you ma'am, lol?

After helping myself to a leftover second helping of mint chocolate chip and joshing around with some fellow Minnesotans I met on the tour, I went to David's house in nearby Burlington to meet this person who was hosting me tonight.  It was about 8:30pm and he welcomed me with a beer and good conversation.  He pointed me to his travel blog and articles he's written for travel magazines, one of which I found out the hard way was only a draft as I accidentally deleted it! I felt HORRIBLE and couldn't apologize enough, all the time David assuring me it was no big deal, it was a work in progress that had taken only fifteen minutes to write.  David has traveled from Colorado to Mexico to Peru on his trusty motorcycle, and has couchsurfing.org to thank for some free lodging along the way, and like so many other wonderful people from the site, he gives back by hosting people when he's home.  I got to meet his girlfriend too, and together they made recommendations for what not to miss in Vermont and New Hampshire.

8/10/2010
Like Cory in Albany, this morning David went to work, and allowed me to sleep in and leave at my own leisure.  These couch-surfing people are awesome!  I grabbed a shower, checked my email, and gratefully headed out.

Before leaving Burlington, I took David's good advice and explored a little.  It was a beautiful walk on the path along the lake, and I loved the charming brick buildings of downtown.

Before entering New Hampshire, on David's recommendation I drove to Smuggler's Notch, "A narrow pass through the Green Mountains. Lined with 1,000-foot cliffs, the winding road is closed in winter. In the earlier days, only a footpath and trail for horses existed here.

In 1807, President Thomas Jefferson passed an embargo act forbidding American trade with Great Britain and Canada. This was a severe hardship for northern Vermonters, since Montreal was closer than other markets in the US. Many local people continued illegal trade with Canada, herding cattle and carrying other goods through the Notch. Later, fugitive slaves used the Notch as an escape route to Canada. During the Prohibition years, liquor was smuggled from Canada over the improved road built in 1922."  I had a great time checking out "Smuggler's Cave," and checking out the awesome cliffs and scenery.

Afterward I went to Lake Willoughby, a couple hours out the way from where I had originally planned to go - and man am I glad I made the trip!  Another outstanding recommendation by David, Lake Willoughby was breathtaking.  "Lake Willoughby, also known as the Lucerne of America, is considered by some as being the most beautiful lake in Vermont.  Located in the town  of Westmore, this body of water was formed 12,000 years ago, when glacier rivers of ice carved out 'U' shaped valleys and spectacular cliffs of granite in Vermont's  Northeast Kingdom.  The lake is known for its crystal clear water, natural sand beaches, great fishing and diving."  I felt like I was in another world here.  I took in the sights and found Devil's Rock, the perfect rock for locals to jump into the water, and unmistakeably marked with a devil painted on it, lol.

After making my memories, I trekked on.

Submit your email address and automatically be sent new posts!