You have a friend in Albany 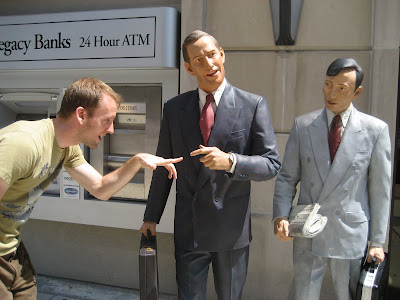 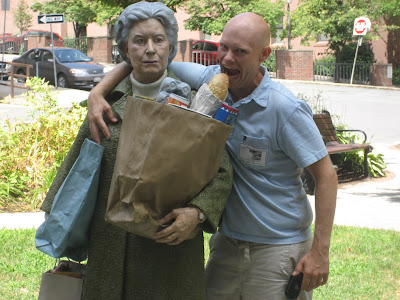 Friday, August 6
This morning I got cleaned up, had my usual pb&j, left a note of appreciation for Cory opening up his home to me, and I was off to meet Adam - another couch-surfing host and friend of Cory's, who lives practically down the street from him. I got to Adam's a little early and checked out the library up the street from him, until just a few moments later when I met up with him at his place. I immediately fell in love with his beautiful building on his beautiful street.

I was his first couch-surfer, and he was enthusiastic to meet me and show me around his neighborhood. I dropped my things off at his place, and right away we went to breakfast at a relaxed cafe with patio just down the street from his place. We got acquainted, shared each others' stories of where we are in life and how we got there, and we discovered that he did a Japanese program in San Francisco almost identical to the one my friend Justin is about to start there!

We explored the historic buildings of downtown Albany, some that even he hadn't been to before, and harassed the peculiar man-statues (as I call them) randomly placed throughout downtown, then we grabbed lunch at quirky Tollgate Ice Cream & Coffee Shop, where I had the special - a fish fry sandwich, soup, and slaw. When our fun Asian waitress delivered my soup, I said "Umm, I ordered clam chowder," to which she chuckled and replied that this was in fact clam chowder - it was "Manhattan Clam Chowder." Manhattan clam chowder has clear broth, plus tomato for red color and flavor. Excited to try new things, I gave it a whirl and this interesting clam chowder hit the spot! The special also came with dessert, which I was excited to try their ice cream that Adam was raving about. I believe I tried a chocolate peanut butter crunch, which ended the meal very nicely.

Next, Adam took me to one of his favorite local outdoor spots, the Helderberg Escarpment of John Boyd Thacher State Park, where we took in panoramic views of the Green Mountains in Vermont and the Hudson Valley, and we explored Indian Ladder Trail and Minelot Falls. On the way back, we made a second stop at Toll Gate where we had more ice cream, lol (I love how spontaneous and unconventional Adam can be). I tried a sample of their award-winning peanut butter and jelly ice cream, and some other flavors, and went with one of the most delicious ice creams I've ever had in my life: orange pineapple. It was a winning combination and unbelievably creamy. Thank you Adam!

Later we had some good beer and good laughs as we watched Family Guy on his roof balcony. Awesome guy, awesome day =)

Saturday, August 7
Today Adam worked a shift at the library, while I set out for Woodstock and The Catskills. On the way to Woodstock, I entered the town of Saugerties, where I noticed a Farmer's Market. Hungry, I pulled in. I opened the car door and immediately caught a whiff of the yummy foods being served up, the star of the show being the local, chef-prepared fried green tomato, purple slaw and horseradish cream sandwich - HEAVEN in a bun! Seriously, I couldn't have had a better first-time experience of trying fried green tomatoes. It was the PERFECT blend of salt, horseradish, slaw and breaded tomato! Ugh, I wish I could have that guy make me one every day! Only in Saugerties, baby! To round out the Saugerties FM experience, I tried the "Amazing Shaved Ice" - which was exactly that - amazing. With cream, strawberries, apricots, nectarines, shaved dark chocolate and mint - all fresh from local farms, it was a perfectly refreshing summer concoction. One which I hope to duplicate on my own someday. I took in the sounds of the folk music a lovely couple were making, then I continued on to Woodstock.

You know you're in the little town of Woodstock when you get there. Tie dye shirts, psychedelic gift stores, groovy colors, rock music in the square, and signs for peace and the free spirit abound. Woodstock is small, so one can park in the free lot down the road and take in the atmosphere with ease.

After I was done exploring Woodstock, I drove all over the Catskills, taking in all the wonderful scenic vistas the mountains have to offer. I ended up at Kaaterskill Falls, "New York State's highest waterfalls. One of the most celebrated scenic sites in 19th century America, painted several times by Thomas Cole...also a favorite spot for American writers." I hiked up the falls to find a beautiful, natural pool where other adventurers had come to enjoy its secrets for the day. It wasn't so much hiking up the steep paths that presented a challenge, but rather, getting down them that I was faced with difficulty and moved very slow and careful.

When I returned to Adam's, we picked up his friend and her very nervous, rambunctious dog for a walk through beautiful Washington Park, which incorporates many of the philosophical ideals used by Olmsted when he designed New York City's Central Park.

We picked up some beer, and all went back to Adam's for the hilarity of Family Guy, South Park, and he introduced me to the TOO FUNNY "Double Rainbow" YouTube video, followed of course by the "Double Rainbow Song."

Sunday, August 8
This morning Adam took me to the Mohawk Hudson Riverfront Trail, a hiking/biking trail along the Hudson River, which provided us an escape to nature, away from the distractions of the city. He had a bike, and I have my roller-blades with me, so we got a nice workout in there before Adam introduced me to Capital Buffet, the greatest buffet of all time! I had no less than FIVE plates full (today's gluttony alert: HIGH) of delicious Chinese food, sushi, pizza, and more. There were so many options even with 5 plates I don't think I was able to to try everything I wanted. After taking a moment to die, er, I mean rest, lol, we drove to get some provisions I needed for my trip. We went to a local gay bar for a drink, bumped into some of his friends, and then what do you think Adam and I did? Yep. Went back to his place for more Family Guy, lol!

Tomorrow I'll be leaving New York, and leaving a new found friend. This was the first time on my travels that I had a co-pilot, and I'll treasure the memories and friendship for years to come. Maybe I'll have the opportunity to show Adam around my neck of the woods someday.