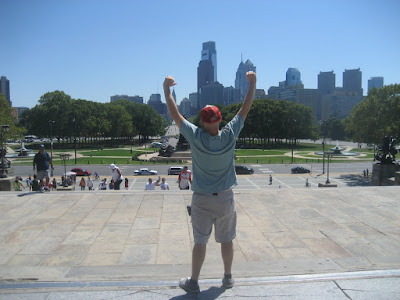 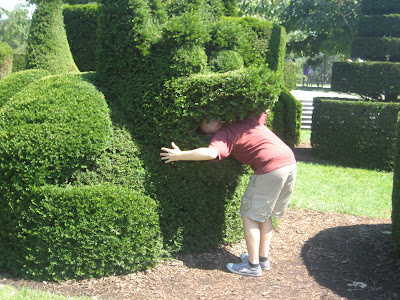 I'm in Philly!  This afternoon I got into the bustling city and found a [free] parking spot about a million miles away from the action.  That's how I roll, lol.  I walked around the city and into Independence National Historical Park, where I saw the famous Liberty Bell, a symbol of freedom for the colonists of Philadelphia, and Independence Hall, where the two documents, the Declaration of Independence and the Constitution, on which the foundations of our country rest, were written.  I wasn't moved like I thought I should be.  Was I too rushed?  Was I too distracted by the handsome guy and his comical friends next to me?  Am I too far removed from the hardships endured for these documents to come to pass?  I've known freedom my whole life, and I am very thankful for that.  I'm not blind to the fact that these freedoms are not known throughout the rest of the world, and that life, liberty and the pursuit of happiness are often taken for granted.  Independence National Historical Park serves as this reminder.  I guess the fact that I get that is enough.

After feeling like I was about to get mugged on the dark, empty, dirty street where I realized I had earlier parked, I exhaled a sigh of relief as I spotted my nearby car.  Phew.  After a couple failed attempts at getting out of the congested city, I found a McDonald's where I knew I would be able to surf the web as I waited to hear from my host.  It was the kind of McDonald's in the kind of area that had a security guard attending the front by the cash registers.  This actually made me feel safe, lol.  I finished my salad and got the lovely call from my host, giving me directions to his place, and an ETA when he would get back to his place.

After a couple passes around the block I was pleasantly surprised to grab a parking spot a driver was just leaving, (like Chicago, Philly is not very car-friendly unless you have wads of cash or park a million miles away) and I arrived at Angelo's, who very graciously welcomed me into his home.

Sunday, August 29, 2010
Angelo was happy to show me around the city.  We started by getting acquainted over the most delicious breakfast I may have ever had in my life, at a restaurant just around the corner from him.  I was very quickly understanding why he loved his neighborhood.  Those were the best eggs benedict I have ever tasted, bar-none!  We walked through the Italian Market featured in the movie "Rocky" (the pride of Philly), where we walked by a Chinese market where I could actually buy my own live chicken (among other things), lol.  Then we walked by an awesome courtyard lined with glass mosaic of miscellaneous things, a place where Angelo said a guy had just started making his art that before too long became a showpiece of the neighborhood, and when the place was going to be sold, the local residents came together and bought it.  Next I jogged up the "Rocky Steps," the 72 stone steps at the entrance of the Philadelphia Museum of Art and took in the awesome skyline of Philly.  I said my goodbyes to Angelo, who I felt I had really made a great connection with, before he took off for the train.

Monday, August 30, 2010
This morning Viola accompanied me to Longwood Gardens in Kennett Square, only a thirty minute drive from Newark, Delaware where we were both couch-surfing with Joe.  The Italian Water Garden and the fun sculptures in the Topiary Garden were our favorite outdoor amusements, but the Conservatory stole the show, especially the guess-the-scent sniffers throughout, the mix-your-own-perfume exhibit, and the seven foot-wide lily pads (with razor-sharp spiked sides).

Tuesday, August 31, 2o10
Today I received a call from Laurel, an old friend of mine from Minnesota!  Back in May I was talking to her parents at a potluck we were at, and they told me to look her up and she'd be happy to see me in Philly.  Well, a few hours after hanging up the phone I was on my way back into Philly for dinner with not only Laurel, but also her sister Jamie who was visiting!  This was an awesome week to visit!  I met them in Chinatown at a place Laurel recommended, called Penang.  I arrived first and the very peppy Asian hostess sat me at a nice table in the back.  I sipped my tea and a few minutes I saw Laurel and Jamie, NOT making their way to my table, but instead being lead to a different table, where apparently the hostess was playing a trick on me (aka forgot about me), lol.  I approached their table where I was well-received with huge hugs and big smiles from a pair of girls that I knew way back in the day.

The memories flooded in, and we exchanged our stories; we found that romance would be the main topic of conversation.  I found that Jamie had gotten married and is living only blocks away from my old place in Minneapolis, MN!  We laughed at Laurel's HILARIOUS blind date experience (she had to sit through 3 hours of Harry Potter with her neck craned up at a sloped screen, eventually excusing herself to go out and get some air, lol), and her engagement that wasn't meant to be, and I told them about my period of a year and a half of over 50 first dates, not a single one of them getting past a third date.

We ventured on to a favorite dive bar Laurel frequented.  I got there first (am I a speed demon or something?), and when Laurel walked in she had everyone in the place acknowledging her.  The place ought to be called "Laurel's."  All of her friends were laid-back and kind, and it was easy settling in.  I had a, what was it called Laurel?  Hmm, forgot the name, but it was a shot of whiskey and a beer for only $3!  Thankfully I do not like the taste of alcohol (who really does, right?), so it was easy resisting ordering more, lol.  Otherwise I really could've gotten into trouble, lol.  Laurel talked to us about an awesome charity bike-ride up the West Coast she's considering.  I hope she goes for it.  Life is short - do what makes you happy.  It was awesome and surreal seeing the 3 of us crowded around that table in the bar.  We're all grown up now.  It doesn't seem so long ago that we were just kids goofing off in a cabin on a youth retreat.  Wow, how the time flies, and how cool it is that you can just slip right back in where you left off with old friends.   Happy trails Laurel and Jamie - until we meet again!  =)