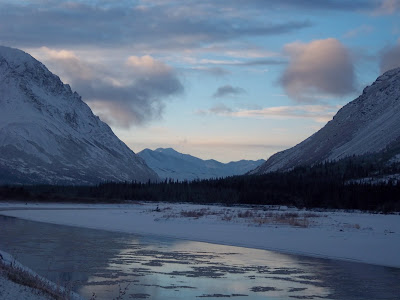 Located only 55 miles east of Russia, Alaska covers 586,400 square miles - that's twice the size of Texas!  It has 29 volcanoes, 33,000 miles of coastline, over half the world's glaciers, and the magical Northern Lights can be seen many nights of the year.  17 of the 20 highest peaks in the U.S. are here, including Mt. McKinley - the tallest mountain in North America.  There are areas that receive 24 hours of daylight, and ones that receive 24 hours of night.  Its record-low temperature is -78 F.  It has received a record snowfall of 974.5 inches in one winter, and 62 inches in only 24 hours!  There's plenty of room.  Despite enticing incentives like no sales tax, no personal income tax, and actually getting paid to live here, the population is only 627,000 - that's an area of 1 square mile per person!  But don't hop the next sled dog here just yet; the cost of living is one of the highest in the country.  I saw an Amy's individual frozen dinner priced at over $7 at the grocery store, and I paid $5 a gallon at a gas station. 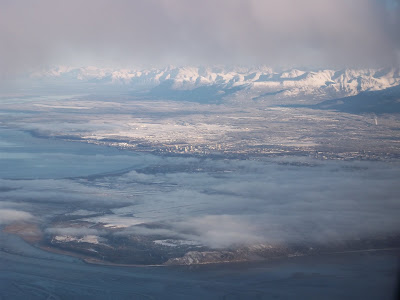 Friday, November 5th
This morning I flew into Anchorage, home to nearly half the state's population.  The flight was fantastic.  I had my own row and more leg room than I knew what to do with!  Once landed, I called the car rental company, and they arrived at the airport in a white-paneled van with no signage (besides a hand-written sign in the windshield).  It immediately became clear to me that this was a small, family-owned business, of which I'm always a strong supporter.  The driver that greeted me couldn't have been much older than 20 years old, and he helped me with my bags and talked to me about Alaska.  We arrived at High Country Car & Truck Rental, located in a log cabin-style building on a small lot off the main road.  When the personable agent asked me if I wanted tire studs, it hit me - I was in Alaska!  After sharing my itinerary with him, it was clear that the added traction of tire studs would be a worthy expense ($8/tire) for the harsh weather I might come upon.

I hit the road and took the 350-mile trip via Parks Highway up to Fairbanks, where I would stay at Tom & Melissa's, a pair of fun, generous couch-surfing hosts.  "Fairbanks is called 'The Golden Heart of Alaska,' a reference to the character of her people as much as to the location in Alaska's interior, or to the discovery of gold in 1902.  It is known for hot summers, cold winters, year-round attractions and some of the state's most phenomenal views of the aurora borealis, or the northern lights."  I was lucky to have sunny weather, good driving conditions, and no close calls with any moose the whole way there.  Melissa warned me about how steep their driveway was, and it took a couple tries for my two-wheel Tiburon to make it up.  When I did, they welcomed me in with an incredible halibut dinner, fresh-caught by Tom, himself! 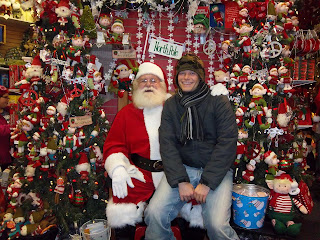 I yet again satisfied the kid in me when I drove to the nearby town of "North Pole" this morning.  It's obviously not the geographic North Pole, but rather the world-famous North Pole that stirs the imaginations of kids around the globe every December.  In this quirky little town, the spirit of Christmas is in the air all year long, evidenced by everything from the candy cane street lamps and decorative bus stops, to the street names (e.g., Santa Claus Lane) and 'North Pole Babes in Toyland' Roller Derby team!  I looked online and even found that the city's firetrucks and ambulances are all red, while the police cars are green and white!  It took only about 15 minutes to drive around the small town, and in no time I was schmoozing with live reindeer and sitting on Mr. Kringle's lap at Santa Claus House, marked by the "World's Largest" statue of the big guy.  It is here where parents can send their childrens' wish lists, and get a letter from "Santa" himself, with the post-mark to prove it.  Before leaving North Pole, I sent out some postcards, and saw the actual "North Pole," one of two made for a campaign to mark the top of the world - its twin was pushed out of an airplane over the geographic north pole, and the other was placed here.

Next I explored a little bit of Fairbanks, with a stop at an extension of the U of Fairbanks Alaska to see some caribou, then further down the road to the Large Animal Research Station to see muskoxen!  They are large mammals native to arctic areas, identified by their big heads, curved horns, and thick coats.  Awesome!

When I got back "home," Melissa treated me to a bowl of homemade spicy cabbage soup, then Tom took me to a hockey game, where I learned that hockey is to Alaska, what football is to the South.  In other words - it's an institution.  And I won't say who won... :(  Back from the hockey game, we enjoyed a big bonfire and backyard of friends that Melissa organized!  I had a ton of fun listening to hilarious stories and sipping (okay, guzzling) Melissa's home-made cider.  If it contains apples it has to be good for you, right?  Mmm... 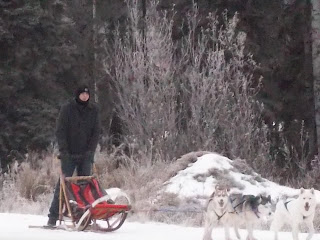 Today, Tom and Melissa showed me around.  We dropped off their recycling - not a typical trip to a center, but rather to a private party with a glass chipper.  Yep, a wood chipper but for glass.  Looked pretty sweet, but I kept my distance, lol.  Then we went to their friends' house, so I could see what a real team of sled dogs looks like!  Their friend introduced us to his dogs, told a couple of their stories and backgrounds, showed us some mushing equipment, AND on our way out, we saw some real mushing in action - right on the shoulder of a main road! 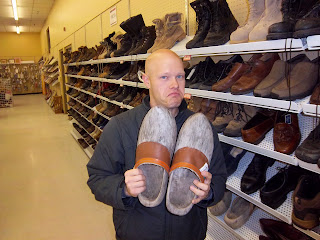 Next, we visited Morris Thompson Cultural and Visitors Center, whose mission is "to preserve Athabascan languages, carry on traditional knowledge through Elder teachings, instill confidence and pride in Alaska Native youth, and inspire residents and visitors to get out and explore Interior and Arctic Alaska."  Not only was it fun going through the different dioramas and exhibits of Alaska, but I also learned a bit about Alaskan culture, pre-white man and present-day.  Before heading back to Tom & Melissa's, we stopped at a thrift store where I bought myself a souvenir t-shirt from Arctic Bowl (a local bowling alley), and spotted a pair of shoes that could've kept Jack Dawson afloat if only they had been the right fit.  When we got back, Melissa prepared a super delicious salmon dinner, caught fresh by Tom.  It's going to be tough to leave! 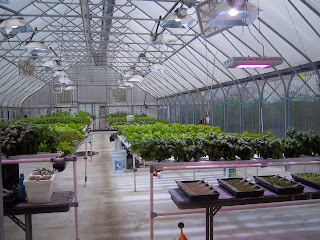 This afternoon I stopped at Arctic Bowl to better appreciate the souvenir t-shirt I bought from the thrift store last night.  As I walked around the perimeter of the building I couldn't believe how in the middle of the afternoon the sky was already so dark!  The bowling alley was unfortunately closed, so I couldn't see inside, but my souvenir was justified nonetheless, lol.  Then I drove to Chena Hot Springs Resort, about 90 minutes away.  First I went to the pool building, where they advised me that the hot showers weren't working, leaving no place to rinse off before and after I would use their natural hot spring, so I declined.  Sigh.  I checked into the Activities Center, where I was informed of other things to do.  I petted some friendly goats, toured the Geothermal Power Plant (because of how remote the resort is, renewable energy is the only economically viable way to go - most importantly, it's eco-friendly!), and toured the greenhouse (they grow "Chena Fresh" produce).

After dinner I toured the ice museum/chapel/hotel/bar!  Now THIS was sensational - and I want one, lol.  It's "America's only year-round ice museum - its vaulted rooms, Stoli ice bar, gallery, and wedding altar all carved entirely out of ice" harvested on-site.  It's kept at a constant 20 degrees F (you're given a parka to wear), but that hasn't stopped several couples from getting married in it, or even sleeping in one of the four bedrooms!!!  It was here that I met Lori and Barry, who helped me with some photos and afforded me the opportunity to try an 'Appletini' at the ice bar, served in a martini glass made completely out of ice!  To my delight, Barry offered for me to keep the glass, which for the next several hours I kept protected like a grizzly bear with newborns, lol.  I thought it would be a unique souvenir to give to Tom & Melissa; they could place it outside and see how long mother nature would keep it.

At about midnight, the 3 of us hiked up to the "Aurorium," a rustic, one-room, heated building with plate-glass windows, located high on a hill facing northeast to view the magical Aurora Borealis, or "Northern Lights."  The lights are always there, but are visible only part of the year, and is hit or miss.  On this particular night, they were not visible to the naked eye, but at times were picked up quite vividly on Barry's camera!  I'm trying to get a hold of a few of their photos (my camera made a fool of me, lol); I'll update my photo album and blog if I receive any of them (fingers crossed). 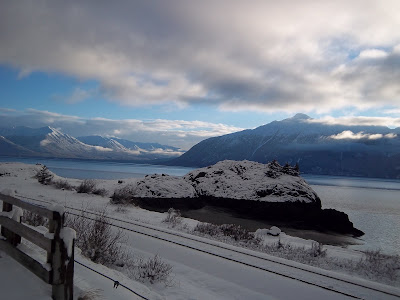 Today was all about the scenery - and just a one-day road-trip was worth the trip to Alaska.  From the interior heading south, I drove over 400 miles through snow-covered mountains as I followed the Nenana River, and passed Denali National Park (closed) and Mount McKinley down to "Turnagain Arm" of Cook Inlet, south of Anchorage.  It was at the bonfire a couple days ago that Tom's buddy was adamant I drive "Turnagain Arm," and I'm glad I took his excellent advice!  I took advantage of several pullouts to admire the dramatic vistas of the snow-capped Chugach Mountains, shimmering waters of Resurrection Bay (where Beluga whales are sometimes spotted), and the dark, quicksand-like mudflats.  A beautiful sunset on the way out topped it off.

Before ending this post, I'd like to note that it was in Fairbanks, Alaska that I observed snowmobiles are called "snow machines," some parking lots are equipped with electrical outlets to keep your car plugged in to prevent freezing, and Alaskans can live through anything.