Washington - The Evergreen State - PART I

"Almost 60 percent of Washington's residents live in the Seattle metropolitan area, the center of transportation, business, and industry along the Puget Sound region of the Salish Sea. The remainder of the state consists of deep rain forests in the west, mountain ranges in the center, northeast and far southeast, and eastern semi-deserts given over to intensive agriculture."


Wednesday, November 3rd
This evening I met Lance, my couch-surfing host, at his home in Seattle.  "The best lie about Seattle is its stigma as the 'rainy city.'  Seattle-ites are the first to point out that they get less rain than New York City, Miami, Boston, San Francisco and other reasonably top U.S. cities. Seattle summers are among the best in the country and attract visitors from far and wide who come to see the famous Space Needle, Pike Place Market and Fremont Troll."  Lance and I got acquainted over dinner at his favorite sushi place around the corner from him.  He brings in a lot of business to the restaurant, and it showed - the owner provided us exceptional service and free appetizers!  Afterward we had a couple beers at a bar down the street, which featured bar games hosted by a fun, peppy drag queen. 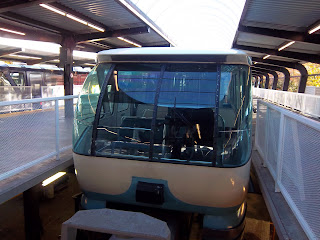 Thursday, November 4th
I sure packed it all in today!  Like San Francisco, Seattle is very congested, and parking is expensive and limited, so it worked like a charm that Lance's place was within walking distance to downtown.  He does, however, live in a somewhat sketchy neighborhood, so using street sense was important.  First I rode the historic Seattle Center Monorail, "built in 1962 to provide a crucial link between downtown and the fairgrounds of the Seattle Worlds Fair.  Originally heralded as 'Tomorrow's Transportation Today' as the Seattle Center Monorail trains travel above the traffic on elevated beamways.  Each train can carry up to 200 passengers and can reach a top speed of 40 miles per hour, making them the fastest full size monorail trains in the country, even today.  Riding on rubber tires, the electric powered trains glide almost silently above the surface street traffic.  Today, it's a favorite part of the Seattle skyline and provides a fun, quick and convenient link from downtown Seattle to the Seattle center.  Both stations provide easy access to some of Seattle's most popular landmarks, attractions, and all major downtown hotels, eateries, and shopping.  In 2008 the odometer on the Red Train passed through the million-mile mark!" 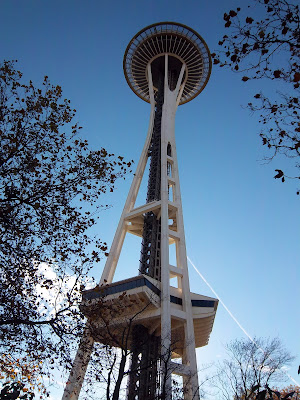 "The Seattle Space Needle was built for the 1962 World's Fair, and when it was completed it was the tallest structure west of the Mississippi River.  It is built to withstand winds of up to 200 mph, earthquakes of up to 9.1 magnitude, and the tower has 25 lightning rods on its roof to prevent lightning damage.   The Space Needle features an observation deck at 520 feet, and a gift shop with the rotating SkyCity restaurant at 500 feet.  From the top of the Needle, one can see not only the Downtown Seattle skyline, but also the Olympic and Cascade Mountains, Mount Rainier, Mount Baker, Elliott Bay and surrounding islands."  The 45-second, narrated elevator ride unto itself is fun, with see-through panels to watch as you ascend into the sky!  Once you reach the top and the elevator doors open, there's some fun, interactive activities for everyone.  Sets of doors lead outside onto the deck for unobstructed views of Seattle and its surroundings as far as the eye can see.  Inside, you can pick a background for the photo that they take of you upon taking your ticket at the base of the needle, and you can instantly email the image to you and your friends.  There are interactive touch-screen monitors feeding into real-time cameras displaying everything one can see from the needle (I like to think of these things as digital telescopes), so that you can press anywhere on the screen and it will instantly zoom in on that area, and give you corresponding facts and info.  Nifty! 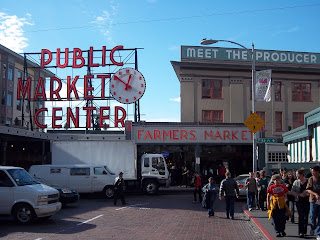 Next I visited Pike Place Market.  "Created in 1907 so that farmers could eliminate the middleman and sell directly to customers, it's the oldest continuously operated farmers market in the U.S.  The market sits at the edge of bluffs overlooking the Seattle waterfront - views from west-facing market cafes are some of the best in the city - and extends across seven city blocks, filling 22 multilevel buildings with 200 year-round commercial businesses, 190 craftspeople, approximately 100 farmers who rent table space by the day, and 240 street performers and musicians.  You'll find everything from magician's supplies, antique political buttons, and ethnic clothing to wind-up toys" - oh, and food, lol.  A little insider note though - this is in the center of the city, so expect to find beggars and dirty bathrooms! 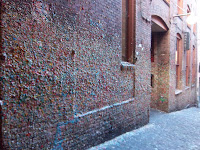 Walking down a staircase and out of Pike Place to a back alley, I found myself completely taken aback to find walls of gum!   I looked it up just now, and apparently it's known as the Market Theater Gum Wall!  "It was named one of the top 5 germiest tourist attractions in 2009, second to the Blarney Stone, it's the location of the start of a ghost tour, and it's a popular site with wedding photographers!  Who knew?!

To balance things out, I took Lance's advice and ferried over to nearby Bainbridge Island for a more relaxed perspective.  Departing Seattle's harbor provided excellent views of its waterfront skyline, making my camera very happy :)  "A scenic 30-minute ferry ride from downtown Seattle, Bainbridge Island offers 28 square miles of rustic charm and natural beauty (though much of the once bucolic landscape and teeming strawberry fields have given way to suburban neighborhoods).  Enjoy shopping in historic Winslow with its trendy cafes and one of a kind island shops.  Outdoor enthusiasts will enjoy acres of parks, a variety of trail-heads, and a walk through the Bloedel Reserve."  Winslow is just a short walk from the ferry dock, but you'll need a car to get the full sense of what the island offers, or rent a bicycle from the vendors at the dock.

I got a call from Lance on the ferry ride back to Seattle, with an invitation to hit up the casino.  A little nightlife sounded good to me, so we picked up a friend of his and drove to the casino where we gorged ourselves on the seafood buffet, and I belted it out at their karaoke bar (with live backup band!), while Lance and his friend gambled their money away, lol.

I got a good night's sleep at Lance's, and the next morning I flew to Alaska.