Hawaii, Chapter 2: Can We Try This Again?

Saturday, November 27th
My flight landed at dusk, and my first couple of days in Hawaii proved surreal and disappointing, to say the least.  A friendly former co-worker of mine (I'll call her Nichelle) who's been following my travels arranged for me to stay with a friend of hers (I'll call her Tess) who had just recently moved to Maui from Minnesota, with her cousin.  After speaking with Nichelle, I trusted it would be a good fit, but from Tess' slurred speech while relaying the directions to her home after getting my rental car, to the half-dozen drunken phone calls she placed to me on my way there, to her irrationally throwing her cell phone at her sliding glass door in an intoxicated stupor after my arrival, the experience got worse and worse, and when I could no longer understand a single word out of her mouth and became extremely uncomfortable, I followed her cousin's lead, and left (not without having to pull her off my shirt first!).

I don't think I've ever been so shaken up from a social encounter in all my life; I've certainly never observed such psychotic behavior right in my face before, and from someone making a first impression on a guest, no less.  I could hardly process the intensely bizarre events I had just witnessed, and my hands were shaking as I sent out a couple of last-minute couch-surfing requests.  Luckily I found myself in the home of a couple of guys from the couch-surfing site only about an hour later.  I was still worked up from all the hysteria, but I did my best to laugh it off as I explained it to them.  They were shocked, and amused themselves by answering a couple of the insane phone calls Tess was relentlessly making to me.

This morning I received another phone call from Tess, who apologetically admitted to not remembering much from last night other than letting herself get out of control, and embarrassed, asked for a second chance.  With my couch-surfing hosts eager to be rid of me (I wasn't the babe-chasing frat guy they had hoped to go out and score chicks with), and my wanting to see the side of Tess that Nichelle had told me about, I decided to give Tess another chance.  After all, I've made mistakes too, and it would be nice to make a friend to explore the island with.  So after meeting Austin (here for a couple of days before heading back to Oregon to visit family; a friend of a cool couch-surfing host I previously stayed with) for "hippie church" (a friendly drum-circle gathering of free-spirits and fire-dancers who show up at "Little Beach" every Sunday to socialize, smoke, and relax), I went back to Tess' to make amends, and in fact had a nice, mellow evening getting to know her.  She was the sweet, friendly girl that Nichelle had described to me :)

Monday, November 29th
I was so excited for today!  Tess invited me to spend the day with her and her cousin and a couple of her friends for the "Road to Hana" scenic drive, aka the "Hana Millennium Legacy Trail" as designated by Bill Clinton in 2000.  "It's Maui's most famous road show, and one of the Pacific's most scenic; the narrow, cliff-side, corkscrew Hana Highway on the island's lush, isolated northeastern coast, is a 50-mile stretch of highway through rain forest canopy, from the laid-back, former sugar-plantation-town-turned-surfing-community of Paia to the quiet, old-fashioned, eye-blink village of Hana.  It climbs and drops among some 617 curves, crosses 54 one-lane bridges, and passes several places to stop and explore, some advertised, some not, including countless fruit stands, dozens of waterfalls, vistas, swimmin' holes, hikes, beaches, and other attractions.  Even with one full day set aside, one cannot possibly see everything.  Note: Fill up with gas before you go!  With Tess' native-Hawaiian friend as our tour guide, we: 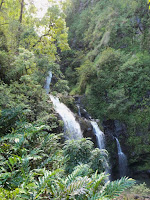 Cliff-jumped from the top of a small waterfall located at the end of a small, slippery trail off the main road (my first time ever cliff-jumping!)

Stopped for a look at Waikani Falls (between mile markers 19 and 20), also called "Three Bears Falls" for the 3 side-by-side falls that get smaller and smaller 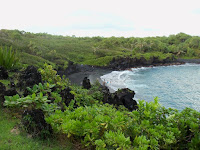 Explored Wai'anapanapa State Park (just past the mile marker 32) - a black sand beach (volcanic pebbles), jagged sea arch, tunnel trail of Polynesian hau branches, and two caves - one down at the beach, and the other a [freezing cold] freshwater spring fed cave pool (the secret hiding place of an ancient, slain princess), oh and I spotted and Indian mongoose (idiotically introduced to the island in the 1800's in order to keep the rat population under control, however unlike the nocturnal rats, the mongoose is active during the day, causing the even bigger problem of endangering native populations of ground nesting birds) 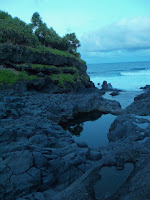 Jumped out of the car for a snapshot of the lush, 80-foot Wailua Falls (just beyond mile marker 45), probably the most beautiful road-side waterfall in all of Hawaii

Pulled over and collected fresh, tasty yellow lilikoi - a type of passion fruit that when opened, reveals deliciously tart seeds and pulp

Instead of taking the same way back, we continued on Hana Highway to try and make the beautiful sunset on the other side, however, we didn't, lol.  Still, it was an adventurous (i.e., white-knuckle) ride, being a very narrow, one-lane, unpaved road with zero-visibility over hills and around long curves.

I didn't mesh well with Tess and her friends today.  As soon she picked them up she turned back into the party girl.  The day quickly took on a different dynamic, and I became the fifth wheel, but I tried not to let it bother me.

This reminds me what a dramatic turn my life has taken the past few years, as I've gone from awkward kid to awkward adult, lol.  Back when I was attending college I would've no doubt gotten along great with these bartender/server types that like to party hard and stay out super late.  Been there, done that!  I still like to go out and have a good time and be social and everything, but I've mellowed out a lot since then, and have brought more balance to my life.  Overall, I like who I am, and realize I'm not always going to get along with everyone.  Not everyone in life will like me.

I'm in Hawaii and am going to enjoy myself!  "There's no crying in baseball!"  :)