Oregon - The Maine of the Pacific

"From the rugged seacoast to the high mountain passes of the Cascades, in the lush greenery and magnificent waterfalls, and in the stony lava beds and Ponderosa pines of the high desert, Oregon is a dramatic land of many changes."
"Oregon's nearly 363 miles of pristine, public coastline is made up of diverse terrain that changes from rugged cliffs to evergreen forests to Sahara-like dunes and boundless sandy beaches. From Astoria in the north to Brookings in the southern tip, follow the shoreline past a smorgasbord of one-of-a-kind attractions including scores of quaint towns, historic lighthouses, and breathtaking viewpoints. Mild temperatures, dramatic scenery and a wide range of recreational activities make the coast one of the state's most popular regions."  It is here that I decided to focus my trip. 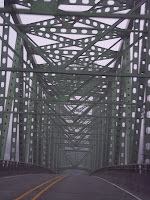 Saturday, November 13th
I entered Oregon from Washington to the north, via the Oregon Coast Highway, aka U.S. Hwy 101, over the monolithic Astoria–Megler Bridge.  "The bridge, which was formally dedicated in 1966, stretches 4.1 miles from Point Ellice, Washington, across the mouth of the Columbia River, to Astoria, Oregon. Its construction was an impressive feat. The bridge’s main span is 1,232 feet in length, the longest “continuous truss” in the nation. It is designed to withstand river flood speeds of nine miles per hour, and wind gusts of 150 miles per hour."  If I could do it over again, I would just drive back and forth over the bridge for a day, lol. 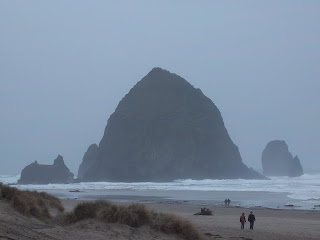 First, I visited Cannon Beach, "northern Oregon's most beautiful seaside village," to check out the "sandy beaches that stretch for miles, interrupted by massive basalt sea stacks, particularly the iconic 235-foot Haystack Rock, one of the largest sea stacks on America's Pacific coast, and the third largest coastal monolith in the world." 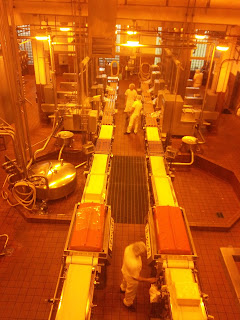 It was raining when I arrived in Tillamook, "home to dozens of dairies and the famed Tillamook Cheese Factory; here, the highway tucks inland, passing forests and dairy and artichoke farms before rejoining the Pacific at Lincoln City."  I took the short, self-tour of the Tillamook Cheese Factory, with interactive kiosks, videos, and viewing windows that provide a "bird's eye view of their cheese-making and packaging teams in action, churning out 167,000 pounds of cheese each and every day."  Of course MY favorite part of the experience was the free cheese sample buffet, offering up six of their tasty cheeses: Squeaky Cheese (a squeak in every chew!), Medium Cheddar (awarded 2010 "World's Best Cheese"), Vintage White Medium Cheddar (aged over 100 days), Vintage White Extra Sharp Cheddar (aged over 2 years - my fav!), Pepper Jack (with real jalapeno), and Garlic Chili Pepper Cheddar (flavor explosion - my other fav!).  Shameless, I went through the line multiple times, lol.  I didn't know they made ice cream, but before leaving I tried a 3-scoop combo of Marionberry Pie, Mountain Huckberry, and White Licorice.  This was a tasty stop!  I didn't make any couch-surfing arrangements for tonight, because I wanted to take today at my own pace, so when I was tired I pulled off the road into a large turnout, and slept as well as I could, given the noise of the passing cars throughout the night. 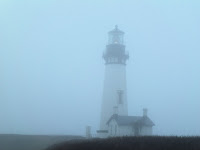 Sunday, November 14th
This morning I entered the town of Newport, "central Oregon coast's largest city and hardworking seaport."  I visited the Yaquina Head Lighthouse, active since 1873.  It took one year and 370,000 bricks to construct, with 114 steps to the top of the 93-foot tower; it's Oregon's tallest!  "Below are two unique intertidal areas, one of which is the nation’s only wheelchair accessible tide pool." 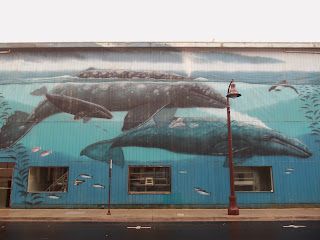 Then I drove down to the port and walked around, admiring the bigger-than-life, amazing scenes of Newport's marine and port life painted on the sides of its numerous buildings.  The noise of honks, trumpets, and roars beckoned me down to the docks, where I was surprised by over a dozen sea lions!
Back on the road, "south of Yachats is the most rugged stretch of the Oregon coast, where ancient volcanoes and lava flows meet the Pacific.  Towering 830 feet above the roiling waters, Cape Perpetua is one of the area's highest points."  I pulled into the scenic overlook to get a glimpse of "Devil's Churn, which began as a small fracture - a weak area in the volcanic rock.  Thunderous waves have gnawed at the rock for eons, eroding it away grain by grain, enlarging the rock into a chasm."  It was neat, but pretty tame.  The water pounding against the rock walls is a bigger spectacle during high tides and winter storms. 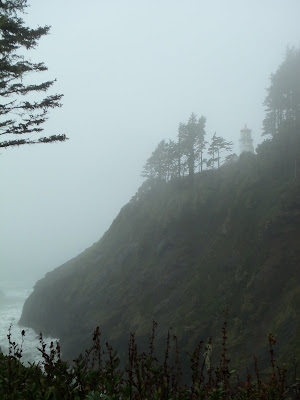 "Just south of Cape Perpetua is Haceta Head Lighthouse, probably the most photographed vista in all of Oregon. This stark white, functioning lighthouse on a rocky headland 205 feet above the Pacific is jaw-droppingly dramatic, and is said to be the most photographed lighthouse in the United States.  It shines a beam visible for 21 miles, making it the strongest light on the Oregon Coast.  The beautifully maintained 1894 lighthouse keeper's home is one of the very few in the U.S. that is open as a B&B."  I walked the short trail (about a quarter of a mile maybe) up to the lighthouse, and even though it was foggy out, I was able to appreciate its beauty, and managed to get some decent shots with my camera.
Just a couple miles south are the Sea Lion Caves - "a natural sea grotto, the largest in the country, populated by smelly, shrieking Steller sea lions, with the world’s only mainland viewing area.  A 208-foot elevator descends into the sea cave, where you can watch hundreds of them clambering onto rocks, jockeying for position, and letting loose might roars (bulls can weigh more than a ton."  The sea lions don't always show, and today was one of those days :(  The staff offered a meager discount to go down and sea the caves empty, but I didn't see the value, so I viewed the caves through their live webcam instead, and looked at a few photos, before heading out. 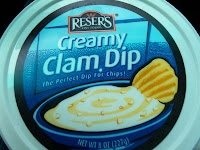 I got hungry and spotted something at a little convenience store that I hadn't ever seen before: "Creamy Clam Dip."  I thought, wow, this sure doesn't sound very appetizing, so I ought to give it a try, lol.  I grabbed some dinner rolls to go along with it.  Sure enough, a few miles down the road and a couple bites later, I discovered it was actually even more nasty than I had anticipated!
After putting the clam dip out of sight, I saw a hitchhiker with a sign on his back, reading "NEED FOOD."  When I pulled over he jumped and took a couple quick steps into the woods, before realizing I wasn't a distracted driver about to kill him.  I handed him my bread, and he asked me for a ride.  He was a short, slender, bearded man, probably around his 50's, though he looked much older.  It was wet and gloomy and I thought what the heck, so I made some room and let him hop in.  A few miles down the road I was hearing a lot of complaining, which threw me, because I was helping him out and he was being ungrateful.  I gave him my food, then I gave him a lift, but he wanted more!  He kept repeating that he didn't have any money, and played the "poor me" game.  What a downer.  This guy gives other hitchhikers a bad reputation.  Needless to say, I let him off at the next stop.  Lesson learned: Don't pull over if you can't see their face.  Next time, I'll get a good look at someone and make a sound judgment before taking any action. 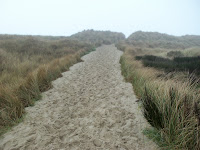 Not long after, I made my way to the South Jetty area of the Oregon Dunes National Recreation Area, "among the largest oceanfront sand dunes in the world, extending along the coast over fifty miles.  Hiking trails explore this unusual ecosystem, linking scrub forests, small lakes, and some 14,000 acres of mighty, ever-shifting dunes, some measuring up to 500 feet high." 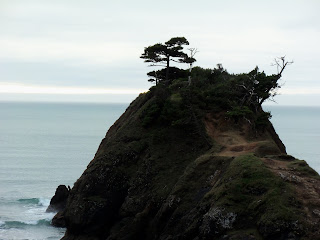 "From Charleston south to the California border, the beaches are increasingly flanked by high cliffs and craggy teeth of rock."  I entered the quaint town of Bandon, to visit the Ocean Wayside, a great place for whale-watching.  Alas, it was still a little too early in the season to spot any, but it was the perfect place to putz around.  There's a little peninsula that was fun to explore, and I found a spot at the edge of the cliff to sit down, and admire the beauty of the ocean, the beach, and the sea stacks.
Just a few minutes after getting back on the road, I found myself continually pulling off of it, to take in one of the most beautiful sunset scenes I've ever witnessed.
A few hours later, I reached Ashland, to meet my couch-surfing host, Matt.  Earlier he informed me that he'd be getting back home before me, but he gave his roommates a head's up to expect me, and they were all very nice and welcoming. When he arrived home he was enthusiastic to learn more about my trip, and gave me lots of recommendations for my upcoming visit to Hawaii (he even got me in touch with one of his friends on Maui).  The atmosphere of the house was very laid-back, and I got a good night's rest.  I was honored to be his first formal couch-surfer, though after leaving the next morning I was really embarrassed to have to go back THREE separate times to retrieve forgotten items!
I left Oregon quite reluctantly, not able to fulfill my plans to visit Crater Lake National Park due to unfavorable weather conditions, but on the bright side, it gives me yet another reason to come back someday!
PHOTO ALBUM