"The Happiest Place on Earth"

I revisited Disneyland today!  It's a traditional outing my good friend Thomas and I do when I come out to visit him - not only does Disneyland rock the hizzy almost as much as HE does, but thanks to generous Thomas I usually save the $100 admission and get in for free  :)  This time, we had a new acquaintance of mine with us.  I met Mike when I was staying with my friends Brandon & Heather in Washington state, and he happened to be visiting family down in San Diego, so I thought it would be nice to invite him along, especially since he said he was going to Disneyland anyway - and what better person to show Mike around (he was a first-timer) than Thomas, a self-professed everything-Disney geek (he has special memberships to online clubs to prove it, lol).

"Opened on July 18, 1955, Disneyland is the only theme park to be designed and built under the direct supervision of Walt Disney.  He came up with the concept of Disneyland after visiting various amusement parks with his daughters in the 1930s and 40s.  With nearly 600 million guests since opening day, Disneyland has a larger cumulative attendance than any other theme park in the world! In 2009, 15.9 million people visited the park, making it the second most visited park in the world that calendar year."


Today, "Disneyland has eight different themed areas or 'lands' that host various rides, shops, restaurants, and live entertainment.  These areas are known as Main Street, U.S.A. (patterned after a typical Midwest town in the Victorian period of America), Adventureland (designed to recreate the feel of an exotic tropical place in a far-off region of the world), New Orleans Square (a themed land based on New Orleans in the 19th-century), Frontierland (recreates the setting of pioneer days along the American frontier), Critter Country, Fantasyland (styled as a Bavarian village), Mickey's Toontown (partly inspired by the fictional Los Angeles suburb of Toontown in the Disney film "Who Framed Roger Rabbit?"), and Tomorrowland (designed as a living blueprint of our future)."

Adjacent to Disneyland Park and part of the larger Disneyland Resort is Disney California Adventure, which "opened on February 8, 2001, with 55 acres that consist of five areas: Sunshine Plaza (the main entrance into the park, designed to evoke the sensation of stepping into a California postcard), Hollywood Pictures Backlot (styled to appear as Hollywood boulevards and movie backlots, with Hollywood, television, and movie-themed attractions), The Golden State (allows guests to experience California's natural settings), A Bug's Land (seen from the point of view of a bug), and Paradise Pier (themed after a Victorian-era California boardwalk).  "In 2009, the park attracted approximately 6.05 million guests, making it the 11th-most visited theme park in the world, its highest ever attendance total for a calendar year." 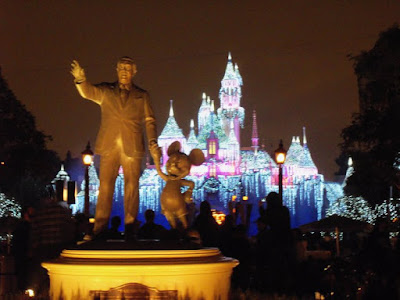 "To all who believe in the power of dreams, welcome. Disney's California Adventure opens its golden gates to you. Here we pay tribute to the dreamers of the past: the native people, explorers, immigrants, aviators, entrepreneurs and entertainers who built the Golden State. And we salute a new generation of dreamers who are creating the wonders of tomorrow, from the silver screen to the computer screen, from the fertile farmlands to the far reaches of space. Disney's California Adventure celebrates the richness and the diversity of California... its land, its people, its spirit and, above all, the dreams that it continues to inspire." ~ Michael Eisner

Thomas got the three of us free "Park Hopper" passes, which allow us entry into both parks.


"Rocketed into the outer reaches of darkest space" on Space Mountain
"Payed our respects to the 999 ghostly residents" of the Haunted Mansion
"Joined the Pirates of the Caribbean on a bayou bateau for a swashbuckling voyage"
"Went for a bumpy ride through a lost temple" on Indiana Jones Adventure
"Caught an enhanced version of the 3-D film musical Captain EO," starring Michael Jackson.