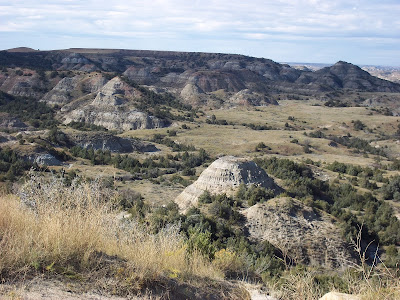 Monday, October 11, 2010
This afternoon I arrived at Theodore Roosevelt National Park.  This 70,000 acres is the "badlands of North Dakota, with sandstone formations that grade all the way from those that are almost rolling in character to those that are so fantastically broken in form and so bizarre in color as to seem hardly properly to belong to this earth." I visited the South Unit, starting with "Painted Canyon," for one of the most magnificent views of the Badlands.  Then I followed the 36-mile loop drive, a paved drive with the usual interpretive signs which explain the park's historical and natural features.  The drive starts with an overlook of Medora, a historic town founded in 1883 by French nobleman, the Marquis de Mores, who arrived with his wife after the Badlands Cantonment military camp was abandoned by George Custer's men.  The small town of Medora has still kept its old west atmosphere somewhat intact, with wooden planked sidewalks, old-fashioned ice cream parlors, and buggy rides.  Of course because I arrived in the off-season, and in addition to being a weekday, I wasn't able to experience the full flair of the town as I would have had I arrived in the summertime, although I was able to appreciate some of the architecture and the general feel.

It was a beautiful drive, offering ample opportunities for wildlife sightings and viewing spectacular geological formations.  On the drive I saw several bison grazing - sometimes so close I could nearly reach out and touch them, along with countless prairie dogs popping their curious little heads out and scurrying across the grasslands, herds of handsome wild horses, white-tailed deer, and on the way out my first-ever elk sighting - a whole family!

Afterward, I grabbed some din-din at Knotty Pine Peanut Bar in Medora.  The staff, patrons, food and ambiance were all great.  I chatted it up with Renato from Rio de Janeiro, Brazil, who had just finished working the summer season at the  horse ranch in the park, then I camped the night at Cottonwood campground inside the park.

Tuesday, October 11, 2010
This morning I took to "Enchanted Highway" - 32 miles of highway from Gladstone to Regent, lined with the "World's Largest Metal Sculptures" (with the Guinness World Records certificate to prove it) from grasshoppers to tin men, erected by metal artist Gary Greff.  A small town man with big world dreams, Gary, a former teacher and school principal, "had never done any art work or welding prior to 1989.  He then began dreaming of ways to bring people and businesses to the small community of Regent -- fearing the town would someday die if it relied solely on farming.  A hay bale strongman built by a farmer inspired him.  He watched people pull off the road to snap photos of the oddity, and he wondered how many people would stop for huge metal sculptures.  So, he began designing, welding, and painting, and in 1991 "The Tin Family" was erected."  A labyrinth, a gift shop, and several sculptures later, Gary still offers his oddball roadside attraction to the public with a big smile on his face and FREE of charge.  Get this:  Gary (who is not a wealthy man by any means) depends solely on donations to build and maintain his work.  He's currently working on the "World's Largest Motorcycle" for placement in Sturgis, South Dakota, home of the annual Sturgis Motorcycle Rally, one of the biggest motorcycle rallies in the country. 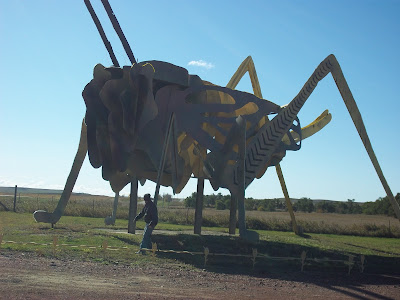 While attempting to take a photo of myself with the giant grasshoppers, my camera dropped to the ground, damaging the lens, thus rendering it useless.  "Noooooo!!!"  Frantically flipping through my receipts, I found the right one and was thrilled to find that today was in fact my lucky day.  Today was the LAST day on the 90-day return policy!!!  I immediately removed my memory card and packaged the camera back up along with all the accessories in the original box and got my ass to the nearest location for an exchange.  And, as fate would have it, the camera I was exchanging had dropped in price since first purchasing it, so I was able to upgrade to the newer, better model for an even exchange!!!  WOO-HOO!  I was back on the road, er...I mean the Enchanted Highway in no time.  The grasshoppers were still there, heh heh, and I was able to get the photos I wanted and continue down the highway.  I happily had lunch inside the boat-made-fort at the "Fisherman's Dream" sculpture grounds.  Later I made a new friend at the "Theodore Roosevelt Rides Again" sculpture, and she and I exchanged turns taking fun photos the rest of the way.

A couple days later I returned to the Enchanted Highway Gift Shop and met the man behind the art, Gary Greff, who was happy to spare a few minutes for a fan :)  Heck, by the end of our conversation he even offered me a job, stating that at the end of my trip he'd love for me to come work for him in any capacity - even working as his apprentice!  There would be other opportunities to choose from as well.  He's planning to open a motel, RV park, dinner theatre, and cafe, and he needs the help.  This place can't operate on its own, and Regent doesn't have a lot resources.  If you want to be a part of something BIG, he'd be thrilled to hear from you!!!  PO Box 184 * Regent, ND 58650 * 701-563-6400 * enchantedhighway@yahoo.com 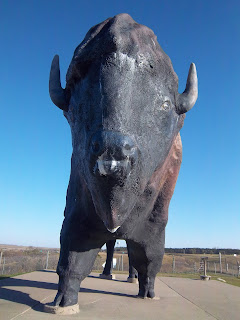 After purchasing my Enchanted Highway t-shirt (the first souvenir of my trip) I visited Sue, "The World's Largest Holstein Cow."  At 38 feet tall and 50 feet long, Sue weighs in at 12,000 pounds!  Of course, I have no "beef" with that, because she's a milk cow, hardy har har...*sigh*  I wasn't Sue's only visitor that day, and I even got a few snapshots with some friendly folks (we each grabbed a boob - oh how silly).  Well after visiting Sue, other sculptures got jealous, so it wasn't long before I was shaking hands with Sandy, "The World's Largest Sandhill Crane," (a bit stuck up), marking my territory on the home of the "World's Largest Buffalo" (its got balls), and spotting "White Cloud" - the legendary white buffalo in Jamestown.

Upon my arrival in Bismarck, Ryan, my CouchSurfing host, whipped up a delicious, spicy shrimp pasta dish and took me out to live music to welcome me to town.  We got along well, and had a lot of laughs over some beers and great music.  The next few days were equally fun.  He took me to an open mic variety show night (I'll never forget the hilarious, angry poem from a disgruntled ex-Walmart employee!) and in five minutes taught me how to play the Jaw Harp, one of the oldest musical instruments in the world.  I look forward to checking in with Ryan later on down the road, and seeing photos of his latest ice igloo (a winter pastime of his).

Friday, October 15, 2010
Tonight I stayed with CouchSurfing host Jem (pronounced YEM) in Fargo.  Just as I arrived he surprised me with an incredible home-made Indian dinner!  Afterward, he showed me the popular sites of downtown Fargo, and we went out for a great night of karaoke.  Jem can really belt it!  Seriously Jem, I hear American Idol calling.

Saturday, October 16, 2010
This morning on my way up to Canada (I'm making the trip to spend the weekend with my new friends I met in South Dakota) I stopped at the KVLY television tower - the second tallest structure in the world!  Its height above mean sea level is 3,038 ft, making it the first man made structure to exceed 2,000 feet in height, upon the completion of its construction on August 13, 1963.  I left after nearly breaking my neck staring up at the darn thing, lol.

Here's a creepy clip from the wacky Enchanted Highway: