Montana: From Glaciers to Hot Springs

Tuesday, October 19, 2010
Coming back to the U.S. was easy!  The pleasant customs agent at the drive-thru window asked me a couple questions, then I was on my way - she even told me the fastest way to get to my destination!


I entered Glacier National Park from the East entrance at St. Mary Visitor Center.  No one was there since it was the off-season.  I helped myself to a map and was on my way.  "The park boasts one of the most spectacular mountain drives, the Going-to-the-Sun Road.  The 3-hour route roughly bisects the 2-million-acre wilderness, climbing from lake basins to the summit of the Continental Divide at 6,646-foot Logan Pass (the highlight of the trip, with fragile alpine meadows unfolding below the sharp-toothed crags), passing as many as a thousand seasonal waterfalls among the dense evergreen forests along the way."  Doesn't that sound incredible?  Unfortunately the middle of the park was undergoing road construction, so I could only get to a certain point and then turn around and head back, preventing me from driving all the way through and seeing Logan's Pass :(  What I did see was beautiful though, and I just tell myself that I saved something for next time I visit.  St. Mary Lake was a gem, and it was my first time ever seeing glaciers, which was major, since it might be the last time I get to see 'em.  Today's visitors see only 25% of the ice that existed back in 1850, and experts project ALL of the park's glaciers will be gone by 2030.  Of the park's estimated 150 glaciers that existed in 1850, only 26 are left! 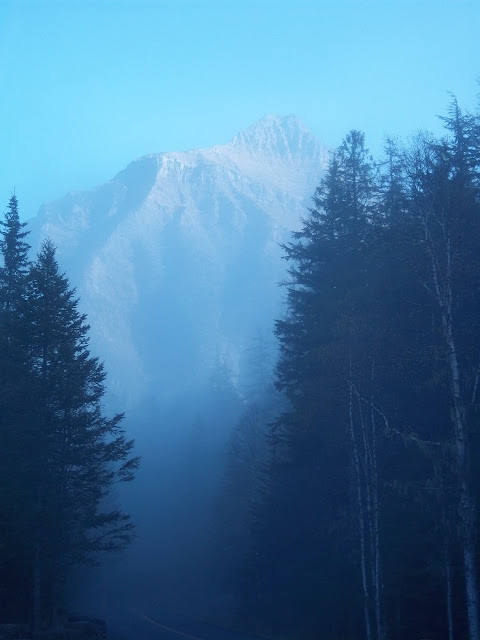 I exited the park at about 6:30pm, so I could get to town before nightfall.  Though I didn't get to drive all the way through the park, the winding route on the back-roads was a lot of fun, and offered breathtaking scenery.  I called my friend Jenny and told her I was almost to her small hometown of Whitefish!  It was great seeing the town where she grew up, and I wish I could have seen her childhood home, but it didn't work out with her folks out of town and hectic schedules and such.  Whitefish is a cozy little ski resort area with log cabin motels and fun hole-in-the-wall bars, nestled below the backdrop of huge, green mountains.  It was quite a fiasco trying to arrange a last-minute couch-surfing accommodation; I ended up making myself comfortable in the car, instead.
Wednesday, October 20, 2010
This morning I headed back out to Glacier National Park, this time from the entrance at West Glacier.  Watching the fog lifting off Lake McDonald from the lodge was so soothing.  I made my way as far as I could go, and had to turn back at Avalanche Creek due to construction. 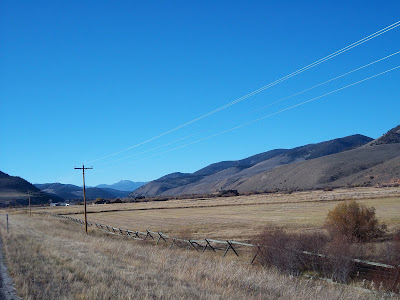 I took a beautiful drive to Wise River - aka "Big Hole," in the state's southwest corner, "one of the state's most beautiful valleys - a 6,000-foot-elevation- prairie basin, where old-time cattle ranches dot the range."  It was the wide open, relaxed Montana I had pictured.
I was on my way down to Livingston when I got pulled over for speeding.  The police officer was remarkably kind and social for a cop, and even chatted with me about my travels for a bit!  Of course, that didn't get me out of the ticket.  He did, however, mark me down from 11 miles over the limit down to 10, which brought the cost of the fine down to $20.  You heard me - only twenty bucks!  He said that until 1990 there wasn't even a speed limit in Montana, but the federal government stepped in and said they wouldn't give Montana any more money if they didn't implement speeding laws.  As the officer told me, I'll "just pay it and think of it as a souvenir," lol. 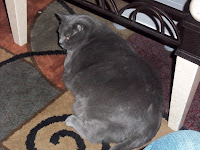 I arrived at Rhonda my couch-surfing host's home much later than I had anticipated; probably around 10:30pm.  She's a kind, fun, freelance photographer.  Her and her boyfriend and I had a great time getting acquainted, and I learned that scenes from the movie, "A River Runs Through It" were shot here in Livingston, and that Jeff Bridges lives here - in fact, his band performs at local bars.  And they told me that Jeff is very laid back, and that Jeff has actually said the movie role he never had to do any acting for (because he's just like the character) is "The Big Lebowski."  SWEET!  Oh, and I must mention I found Rhonda's obese cat very notable also.
Thursday, October 21, 2010 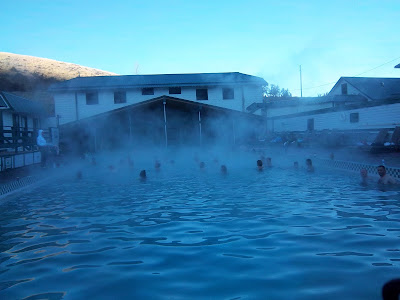