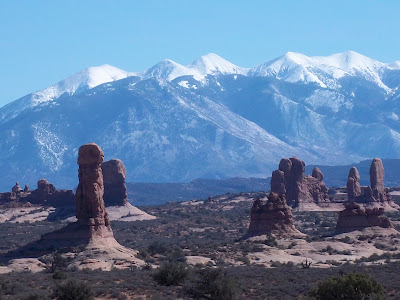 "Utah is unique.  Most of it lies on a plateau higher than 4,000 feet above sea level. The geology of this region takes on an amazing variety of shapes and colors. Elevations rise and fall dramatically in the shape of mountains, buttes, plateaus, and arches."  And the southern half of Utah, my favorite part, is a natural wonderland - nothing short of paradise to the outdoor enthusiast.

Tuesday, October 26, 2010
I arrived in Utah after dark, and hadn't successfully made any sleeping arrangements, so I pulled onto a quiet dirt road off Highway 191 on my way to Canyonlands National Park. 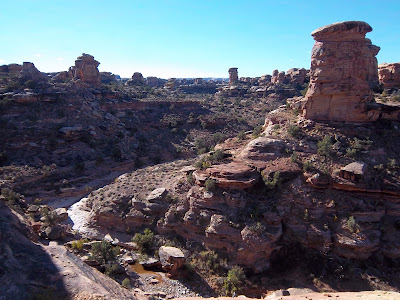 Wednesday, October 27, 2010
Canyonlands, Utah's largest national park, packs so many reasons to visit into 530 square miles that it's divided into 3 distinct sections, and because of the Green and Colorado rivers that slice it into a Y, there are no roads linking these districts, giving each section its own separate entrance quite far from one another.

This morning I visited the Needles District to the southeast, "which takes its name from its distinctive red and white striped sandstone spires; it's also home to a number of impressive arches, and this is the best section for hiking and camping."  I did the short hike through Cave Spring Trail, which features a historic cowboy camp and prehistoric pictographs, with two ladders to climb.  It was short and sweet :) 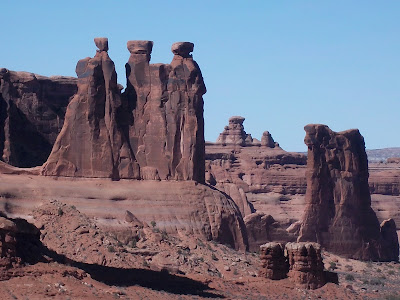 Next I visited the nearby Arches National Park - Utah's most famous park, and one of my favorite national parks to date.  "This red, arid desert is 'the most beautiful place on earth,' wrote environmental guru Edward Abbey in Desert Solitaire.  Arches contains the world's largest concentration of natural sandstone arches - preserving over 2,000, like the world-famous Delicate Arch (which is proudly displayed on the state license plate), as well as many other unusual rock formations, such as fins, pinnacles, spires, and balanced rocks.  The extraordinary features of the park create a landscape of contrasting colors, landforms and textures that is unlike any other in the world."  The 18-mile drive was  stunning.  I admired the spectacular formations in awe, with names like Park Avenue, Three Gossips, Windows, and Balanced Rock - "a 3,600-ton boulder that looks as if it could be toppled by a stiff wind."  All of which I viewed with a magnificent backdrop of the snow-capped La Sal Mountains. 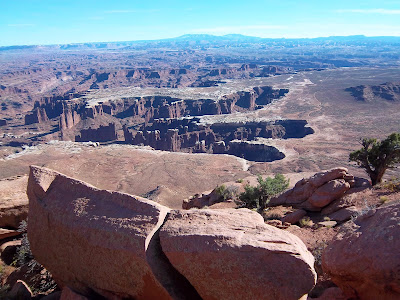 Later I visited the "Island in the Sky" district of Canyonlands National Park.  "The Island in the Sky mesa rests on sheer sandstone cliffs over 1,000 feet above the surrounding terrain. Every overlook offers a different perspective on Canyonlands’ spectacular landscape. The Island is the easiest district to visit in a short period of time, offering pullouts with spectacular views along the paved scenic drive."

Over the next several hours I made my way to the small, rural community of New Harmony, just outside Zion National Park, where I met Cade, my couch-surfing host.  He welcomed me into his home, shared his pasta dinner with me, told me about himself (I bet he's the only rancher you'll meet who has ever been a vegetarian!), and showed me to a comfortable guest room.

Thursday, October 28, 2010
This morning Cade fixed us breakfast, and offered me fresh apples from his tree in the back for the road ahead.

My first stop for the day was at Kolob Canyons - a separate section of Zion National Park, set in New Harmony's backyard.  I drove up the relatively short scenic byway to the Kolob Canyons Viewpoint, which "reveals the cooler, more thickly forested world above the finger canyons.  From this elevated viewpoint you can see the pattern of the canyon-carving streams along cracks in the Colorado Plateau." 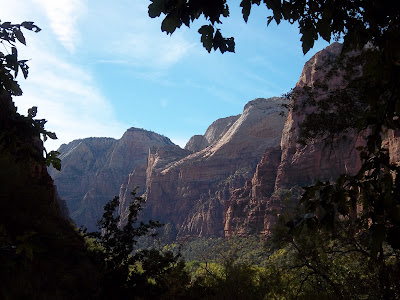 About an hour later I arrived in Springdale, and easily hopped onto a free shuttle bus into the main park.  With nearly three million visitors per year, Zion National Park is Utah's most heavily used park.  Therefore, to help preserve its natural wonder, it adopted a shuttle system into and within the park.  Inside the park, the Zion Canyon Shuttle stops at eight locations in the park, from early morning to late evening as often as every seven minutes.

Designated in 1919, Zion is Utah's oldest national park.  It is known for its incredible canyons, including The Narrows, which attract canyoneers from around the world.  The park is a hiker's dream - the possibilities are endless.  "It's hard to believe that it was the pretty little Virgin River that carved these 1,000 foot walls of delicately hued sandstone, some of the largest chunks of rock you've ever seen."  I hiked the Emerald Pools trail, took in a spectacular view from under the trickling waterfall at Weeping Rock (where I also lost my favorite hat, grrr), and strolled along the Riverside Walk at the Temple of Sinawava.  I ended the day with breathtaking views from Canyon Overlook.  On the way out of the park my brakes started screaming out the most foul, high-pitched squealing noise you can imagine - I was made even more embarrassed as the sound was amplified by a hundred through the 1.1 MILE-LONG Zion-Mount Carmel highway.  Time for new brakes!  On a final note, the park is beautiful, and I only saw a portion.  I definitely intend to visit again and hike Angel's Landing and The Narrows.

About 5 1/2 hours later I met Birk, my couch-surfing host, in the Deer Valley area of Park City - the destination of choice for those seeking the country's top-drawer ski experience, and where the U.S. ski and snowboard Olympic teams train.  It's also home to the yearly movie-star-studded Sundance Film Festival.  Birk offered me a beer, shared his hilarious experiences watching famous people try to ski (Paris in her pink pants, LOL), we laughed like crazy people at some shows he put on, and he taught me how to create extra sleep space in my Honda! 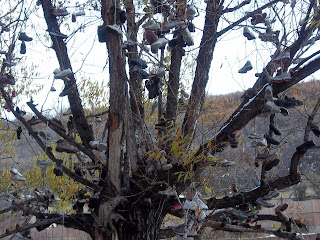 This morning I went into downtown Park City (where scenes from "Dumb and Dumber" were shot!), and checked out a shoe tree.  Yep, a tree of shoes, lol.  I contemplated my contribution, but ultimately declined when I realized I would be without shoes :P