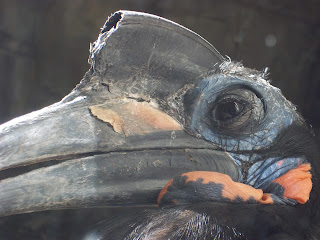 Saturday, October 2, 2010
It's my birthday today!  To celebrate I took myself to the Henry Doorly Zoo in Omaha, Nebraska.  I don't like the idea of animals being isolated from their natural habitats for our own amusement, but it's nationally renowned for its leadership in animal conservation and research (and I was being selfish).  "Everyone has heard of the San Diego Zoo and The Bronx Zoo, but the Henry Doorly often outranks them as America's favorite securing an international reputation with "total immersion" exhibits that are considered among the best on the world.  The 110-acre zoo has a secret weapon: Omaha's great wealth.  The city ranks eighth among the nation's 50 largest cities both in per capita Billionaires (Warren Buffet was born here) and Fortune 500 companies, and the community gives generously to keep its animals (and kids) happy."  With this kind of money, it's no wonder the zoo continues to break records.  "It features the largest cat complex in North America; Kingdoms of the Night is the world's largest nocturnal exhibit and indoor swamp; the Lied Jungle is the world's largest indoor rainforest of its kind, and the 'Desert Dome' is the world's largest indoor desert, as well as the largest glazed geodesic dome in the world.  Oh, and the world's second-largest free-flight aviary."

Highlights of my 6-hour experience (and still didn't see everything) include getting up close with a friendly Abyssinian Ground Hornbill, bats (all kinds including vampire bats and fruit bats), and silver-back gorillas (via cool viewing tunnels), chuckling as mama orangutan took away baby's crib (milk crate w/ towels) after baby continued to play the you-can't catch-me game, and oh yeah, I watched a kid get crapped on in the jungle.  Yep, lol!  A moment later in the bathroom I asked him if he was alright.  Through the runny, white poop and the blood (for some reason he had a bloody nose), he replied very upset "A monkey POOPED on me!"  I said, "It happens."

After the zoo, I met Andrew, my CF host.  Famished, we grabbed some dinner at a Jamaican place he'd been wanting to try.  The service was crap, the food was crap (my "veggie wrap" was nothing more than a tortilla filled with shredded cabbage," but the conversation saved the day!  I got to learn about Andrew (the only straight ballroom teacher dude I'm likely to ever meet), in exchange for information about my trip and ambitions.  Afterward, he took me to hip, 3-story dance club where he had arranged for his friends to come help celebrate my birthday, too!

Sunday, October 3, 2010
This morning on my way to Alliance, I crossed under "The Great Platte River Road Archway Monument" (that's a mouthful!), and since I'm a big fan of the movie "About Schmidt," I had to stop and walk in the same steps as the legendary Jack Nicholson.  Oh, and I suppose it was neat walking through the life-size dioramas that pay tribute to the pioneers who passed through Nebraska on their way West, too.  "The Great Western Migration" as it's called, was "the largest voluntary human relocation in recorded history.  Some 400,000 people passed through Nebraska, often on foot, while traveling nearly 2,000 miles to California and Oregon.  The most remarked upon landmark in their diaries was Chimney Rock, a 120-foot sandstone spire atop a 200-foot mound, which seemingly came out of nowhere after miles and miles of vast prairie."  My favorite part of this historic site is in its name:  The Native Americans called it "Elk Penis."  How beautiful.  HA!

I reached my destination in the evening.  Alliance is home to Car Henge, America's #2 Wackiest Roadside Attraction (second to the Toilet Museum in Alamo Heights, TX, LOL)!  Now most of you have heard of Stone Henge, a prehistoric monument in England, composed of earthworks surrounding a circular setting of large standing stones, but here in Alliance sits "38 trashed automobiles from the 50's and 60's, painted gray and arranged in the exact same size, shape and conformation of Stonehenge.  It even allegedly works, marking the solstices and equinoxes!  As described to me by a local resident, Jim Reinders, a local engineer, was back from England for a family and class reunion, where a little inebriated from the festivities, him and his fellow reunion-ites thought this'd be a good idea for the town, and after three days of "blood, sweat and beers," Car Henge was born.  After having an absolute blast meandering around this baffling work of art and the other wacky sculptures like "the spawning salmon," I went to meet my CF hosts.

Kari and her husband Drew are fantastic.  No sooner did I walk in the door, than did Kari offer me her delicious, gooey, homemade rice krispy treats.  Then she showed me the guest room, and chatted me up as the 3 of us watched the hilarious "Anger Management" (it all comes back to Jack Nicholson, lol).

Monday, October 4, 2010
This morning Kari and I chit-chatted some more, while I blogged away, after having some tasty homemade blueberry muffins (she's quite the baker!).  Kari left for her dentist appointment, while I made my way to the Visitor Center to get directions to 1910 Secret Coffee House at Hoffhaus Gardens that Kari & Drew had mentioned to me.  The two women inside the visitor center were the warmest, generous people you could meet.  I took a visitor's survey of the town as lady 1 persistently looked for a free espresso coupon and lady 2 cheerfully grabbed me bottled waters.  Between the charming, red brick streets of the faded, old-American Main Street (complete with original hardware store and single-picture movie theater), the modern amenities like contemporary full-service library, museums and park system, and the unmatched hospitality of the town folk, I felt this old railroad town deserved a good ranking.

The most unique coffee house I've ever been to, 1910 is actually located right inside the 100 year old greenhouse!  I looked around at all the little random objects they had decorated the place with, and couldn't help but notice the old blue bicycle that hung from the ceiling.  I was greeted by RosaLee, (her and her husband own the greenhouse, and their son owns the coffee-house), who whipped me up some lunch.  Today's sandwich was sliced beef, but out of consideration for my dietary preferences, she surprised me with a delicious roasted veggie chipotle panini.  As I stuffed myself silly with my messy sandwich, RosaLee educated me on the history of the town, the origin of Car Henge, and local attractions.

After I was done blogging at the 1910, I went to the beautiful library for a little while, where on my way I noticed a sign stating Ryan Reynolds is running for City Council.  Who would've thought, lol?!  When I got back to Kari & Drew's, I was greeted by a fish fry!  Drew was cooking up some fresh fish he caught (that we complimented with the most amazing BBQ sauce) and homemade cornbread with honey.  We all got pretty personal, talking about everything from favorite classic movies to issues of personal and governmental environmental responsibility, and corporate ethics (or lack there of).

Tuesday, October 5, 2010
This morning I went back to 1910 Secret Coffee House for more blogging.  This time RosaLee's son was working and he made me a cherry Chai tea (yum!) and chatted with me about my trip and what I should see.  Then I went to the library to continue blogging, and on the way (it seems I'm always stopped by something on the way there, lol) I saw my first Halloween-decorated house of the season.  It was a good one!  The library unfortunately didn't have any Learn-Spanish CDs (I accidentally left mine back home in MN), so I grabbed some other worthwhile-looking audio books and put 'em on my computer, instead, because I can get bored of music on the road.

When I got back to Kari & Drew's, I walked into a wall of garlic aroma.  Drew was making a shrimp and feta pasta dish - HEAVEN.  We had the full spread - salad, pasta, garlic bread, wine...We savored our meal while watching Back to the Future, which was a totally different experience for me now seeing it as an adult.  I now understand a lot of the humor I didn't quite catch when I was a kid!  Great flick!

Wednesday, October 6, 2010
This morning I would be leaving Alliance, and when Kari learned I had left my Spanish CDs back home, she happily burned me copies of hers, and placed some ingredients for trail mix on the table for me to mix up for the road, then she was off to a job interview.  She's so incredibly thoughtful.  I'll miss my new friends Kari and Drew.

I went to Fort Robinson State Park.  "This historic outpost served from the days of the Indian Wars until after World War II. This was the site of the 1879 Cheyenne Outbreak and the death of famed Sioux Chief Crazy Horse. Over the years, the fort served the Red Cloud Indian Agency, as a cavalry remount station, K-9 dog training center, POW camp and beef research station.  The State Historical Society operates a museum and many restored or reconstructed exhibit buildings to interpret the Fort's history."  After taking a look around the grounds, I took the park's scenic drive, where I saw wild horses!  Then I spoke with one of the docents in a museum at the park to see where I could try to spot some of the buffalo.  I took the road he told me about, but all I could see were a couple dark spots resembling buffalo way in the distance where the access is restricted.

Next I went to Toadstool Geologic Park, which the owner of 1910 Secret Coffee House in Alliance told me to check out.  Located in a remote area known as Nebraska's Badlands, the park trail you can hike shows unusual examples of the effects of water and wind over millions of years forming some pretty cool rock formations.  After hiking the trail, I got in my car, to find that the gas indicator was on.  When I was in Crawford, the nearest town with a gas station about 18 miles away, I thought I'd have enough gas to get me to the park and to the next nearest town on my way to South Dakota.  Well this certainly makes things interesting.  I figured I better not take any extra chances and drive back to Crawford.  It couldn't have been much more than a mile before my GPS told me to a take a turn I was unfamiliar with.  I didn't remember taking this route on my way to the park.  I thought I'd give the GPS the benefit of the doubt, so like a robot, against my instincts, I followed the route it gave.  So I take the little road that gets more and more barren and rugged as I go, and I cross my fingers that there's a connecting road at 3 miles like the GPS indicates.  Can you guess what's at the end of the 3 miles?  Nothing but a few staring antelope that if could talk would ask "What are you doing here you idiot?!"  I back up, all the while my GPS continues insisting for me to turn into a field onto a road that doesn't exist, and after bottoming out on at least 3 cattle gates, I return to the dirt road where I was before.  The next 18 miles to Crawford were a bit nerve-racking as I was really putting my gas reserve tank to the test!  Tom, you whore (referring to my Tom Tom GPS heh heh)!