Of course no cross-country trip around the U.S. is complete without a visit to Canada, right?  Exactly, haha.  Actually, when I was in South Dakota I met a couple of fun Canadians who in the stupor of insane hilarity at a diner in the town of Wall, invited me up to their "Fall Supper Social" at the hall in the small community of Broad Valley, Manitoba.

Saturday, October 16, 2010
Excited for more laughs and authentic Ukrainian food, I cheerfully arrived at the Canadian border, one step closer to my new friends.  I approached what looked like a drive-thru window, lol, and answered a line of questions about where I was going, and apparently I didn't pass the test, because the dude with his African-meets-British accent told me to park and go inside.  Inside I spoke with a guy who asked me the exact same line of questions; my truthful answers the exact same as last time.  He wasn't satisfied, so he had me sit and wait for someone at the immigration window.  Yep, that's right - immigration, lol.  This guy, like the others, was cold and abrasive, and started souring my perception of Canadians.  This was now my third time answering the exact same line of questions.  He actually had me wait again while he went in back to try and check if what I was telling him was true.  He came back and said "It's called Fall Supper, not Fall Harvest Supper," as I had previously misspoke.  Wow, you really broke the case, sir.  Even so, he had already made up his mind that I was a drug-smuggling liar, so he actually introduced me with customs guy number FOUR, who followed me out to my car, and instructed me to wait 10 feet from the car, and watch him over the course of the next 20 minutes inspect all the items in my car, one by one, including the photos on my camera and my address book!  It was cold outside and I was losing my patience as I witnessed this goon let my loose papers of addresses get taken away with the wind.  Offended, I said, "Umm, an important paper just blew out of there."  "Go get it," he smugly retorted.  I carefully ran across the wide pavement to retrieve the important paper this bastard let fly away.  After returning, the buffoon proved his stupidity by asking me why I had so much stuff.  "Like I already said, I'm on a long road-trip through the U.S."  Lacking evidence to support their presumption that I was a thug about to run rampant through the streets Manitoba, he told me I could go.  Biting my tongue, I got in my car and continued onward.  I wanted so badly just to turn around and say "Screw Canada" (giving customs a little "constructive criticism" on the way.  I felt violated and ashamed, and some tears began to well up, yet I hadn't done anything wrong.  I told myself to not be such a baby, to not let it get the best of me, and to remember I was on my way to reunite with friends.  I do have to admit though, that when the cheery Keebler kid (he looked like an elf) tried pumping my gas, it felt good telling him to piss off (of course I didn't use those words). 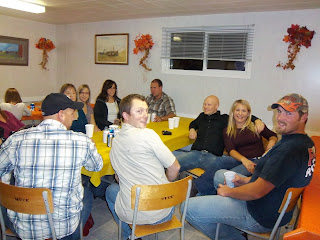 The night that followed was great.  After catching up with my new friends at their lovely farmhouse, and laughing off the ridiculous mess about my experience at customs, we hopped into their truck and went to the Fall Supper.  We stepped inside the hall, purchased drink tickets, and were off to the races.  The atmosphere was down-home and festive.  They introduced me to their friends, and I watched as the townsfolk reacquainted.  Dinner was awesome.  There was plenty to choose from on the buffet tables, and I got to try some new things.  After dinner the celebration poured onto the dance floor.  Line dancing and the simple two-step were the popular dances of choice.  After we had our fill we continued the party at a Adam & Meghan's friends' house for more debauchery. 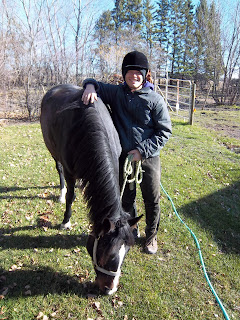 This morning Adam & Meghan introduced me to my first Canadian soap opera, haha.  It was as cheesy as the American ones, so I had a good laugh, though Meghan was really into it, and I hope I didn't offend her.  Later in the day I was bucked off a horse!  Geez, for a cute, little name like"Raisin" that horse has some spunk!  A bit on the skittish side, she took off after being spooked by something in the woods.  I was okay, and for my first time ever being bucked off, it wasn't too bad.  Let's do it again someday!  After returning Raisin & Sunny to their pen, Adam made a campfire, and we got to know each other more, and to be honest, the conversation got a little heated.  The three of us cooked up some hot dogs over the fire, and had a good time :)  Later, Meghan whipped up a delicious berry pie-type dessert.  YUM.


Monday, October 18, 2010
Meghan gave me the grand tour of their successful seed plant across the road this morning.  She showed me how they get sorted and processed, and led me around the equipment yard, and bee farm apparatus, then we said our goodbyes.  I hope we see each other again one day.  Maybe in Minnesota?  They go down about once a year to the stores they don't have in Manitoba. 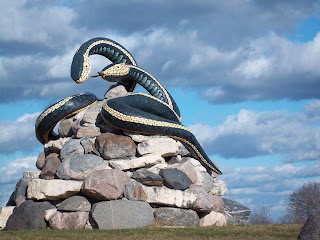 Just a few miles away are the Narcisse Snake Dens - the winter home of tens of thousands of Red-sided Garter Snakes, and is the largest concentration of snakes in the world!  I've been fascinated with snakes since I was a kid, so this place was a must-see.  Though most of the snakes were down in the pits preparing to hibernate, I still saw a good number of them while walking the trail and viewing the four dens.  I'd love to check this place out during mating season when the snakes wrap themselves into big balls.  Big balls.  That's fun to type.  Making my way through Winnipeg I stopped to take a few snapshots of the unusual churches.  When night fell I camped it at a large, secluded picnic area off the highway. 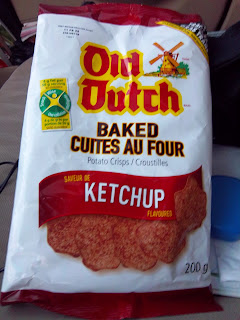 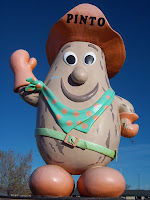 This morning I couldn't help but notice the cool shadow my car cast onto the landscape off the road, and had to take advantage of the photo opportunity - I ended up using one of the photos for the revamp of this blog!  Sweet silhouettes aside, I made one of the most fantastic discoveries that Canada has to offer yet:  Ketchup chips!  These bold, savory baked potato chips by Old Dutch are a new-found joy in life.  Find them, savor them, love them.  Good god they're delicious.  First windmills, now ketchup chips.  Take it from me, the Dutch know what they're doing, people.  This day only got better.  Yes, I'm talking about Pinto Macbean: The official mascot of Bow Island, "signifying the importance of the dry edible bean industry to the area."  He became erect in 1992.  And I'm very happy with that.


Now comes the story of the rudest person I've ever met - and no, I'm not talking about a Canadian customs agent.  I'm pulling into a gas station which has two pumps, each with two dispensers, for a total of four dispensers.  There was no one else at the pumps.  I pull up to one side of the pumps, and as I'm filling my tank a man in a nice, black car pulls up directly behind me, and sits in his car, apparently prepared to wait for me to finish.  Mind you, there is an available pump he can access if he would just pull to the other side.  The pumps were not pay-pumps, so one must pay inside.  I went inside, used the bathroom (just #1 - this is relevant to the story, lol), and payed the clerk.  Just as I walk outside, the man whose car was still sitting directly behind mine (aka "Moron") is on his way up to the door I'm walking out of.  He sees me, then turns around to walk back to his car, and as he's walking back to his car he says "Get your car out of here, I've been waiting."  I said, "Excuse me?"  He says "I've been sitting here long enough.  Get outta here."  I say "Ya know, there's another pump right here.  You could have just pulled your car to that side."  Then Moron tells me to "Get the hell out."  Flabbergasted, I say "I'll move when I feel like it."  I pulled away from the the pump to let Moron get his way, and parked on the side of the gas station to check my GPS.  Moron, who behaved like he was in some kind of hurry to get the president to safety or something, parks next to me after getting his gas, and goes into the gas station.  Was Moron trying to tell me through his stupidity that this is the Canadian way of getting gas?  You're supposed to park away from the pump before paying inside?  "Interesting."  Of course by "interesting" I mean absurd. 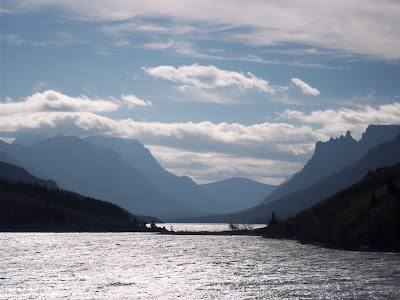 Before returning to the U.S., I explored Waterton Lakes National Park of Canada - a beautiful area preserving the Waterton chain of lakes and the Canadian Rockies, which sits above Montana's Glacier National Park.