Saturday, October 23, 2010
I must have driven through Fort Collins this morning, because I passed the Anheuser-Busch Brewery and could practically taste the free samples, lol.  Around dinner time I arrived at my couch-surfing host Angie's house in Boulder.  She showed me the beautiful downstairs guest room I would be staying in, then prepared a delicious, nutritious dinner, then she helped plan the route for the rest of my trip. 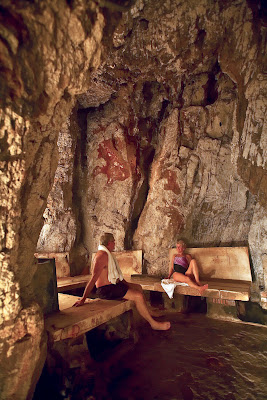 This morning Angie generously treated me to oatmeal, and sent me off with snacks for the road ahead!  Before leaving Boulder I made sure to take a few photos of the city's iconic rock formations, the Flatirons.  Afterward, I made my way to Glenwood Springs, aka "spa of the Rockies."  There I tried a "cleansing sweat" at the Yampah Spa and Vapor Caves, "the only natural vapor caves in North America.  Mineral hot springs keep the three caves at 115 degrees and 100 percent humidity year-round."  Now let me preface this by saying that Angie told me to skip this place; that it was kind of seedy.  And let me tell you, it felt unusual to walk into what looked like an ordinary salon, only to get into swim trunks and walk down into hot, dark caves, lol.  And the staff doesn't lead you down there, either.  You explore it yourself, which I suppose can be considered part of the fun.  The caves themselves were, well, caves, lol.  It wasn't busy, so there was plenty of space.  There wasn't much lighting, and it definitely smelled like a sauna, haha, but it was an interesting experience nonetheless.  As their website states, "The Vapor Caves consist of three adjoining underground rock chambers. Visitors descend a stairway inside the main building and pass through a stone corridor into the caves.  Relax on slab marble benches in the rocky alcoves, and inhale the natural steam vapor in the warm, dimly lit cave chambers."  I could easily envision the salon closing at 5pm and reopening in the middle of the night for cult gathering, lol. 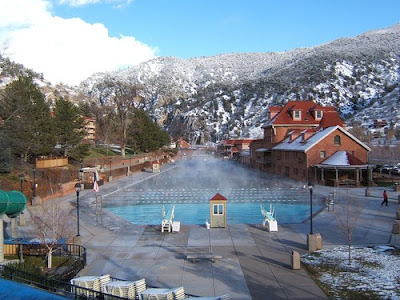 After witnessing the sacrificial offering of a virgin at the vapor caves, lol, I moseyed next door to the town's main hot springs pool, "which the town claims that at 405 by 100 feet, is the largest in the world!  Spanning over two city blocks, it holds 1,071,000 gallons of water maintained at 90 degrees." There's also a smaller pool (hot tub) kept at 104 degrees.  It was a lot of fun for the child in me, and also offered a unique, partially submerged sitting area with hoses acting as jets that for 50 cents, one could create a jetted hot tub experience for their seat.

After seeing a movie I drove to the nearby town of New Castle, where I met Marilyn, my couch-surfing host.  She welcomed me into her cozy, rustic, cabin style home, introduced me to her dog, and showed me to my guest room.  We chatted a little bit before heading to bed.  The warmth of the wood-burning stove had me sleeping like a baby through the cold night. 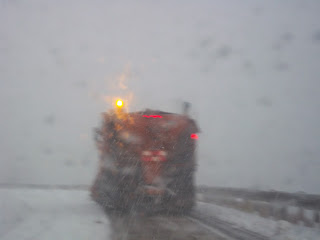 I left New Castle, not knowing what challenges I faced ahead.  The next couple of hours I was met with the biggest snowstorm of the year - well, Colorado's first snowstorm of the season at least.  What began as a snowflake here and there, turned into a massive downpour with near-zero visibility.  Did I mention I was driving in the middle of the mountains?  Yep!  The cars began piling up, literally, as I saw one after another in the ditch, being salvaged out by tow-trucks.  With determination (and my car in first gear), I tried to get ahead of the storm.  Luckily I was following behind a heavy truck, and I kept myself out of the ditch by staying in his tracks.  Even still, my little Honda Civic became less and less effective against the storm, as I climbed up the Rockies with near zero-visibility.  I began saying my prayers as my car barely crawled up the pass through 14,433 foot Mount Albert- the highest peak in the Rockie Mountains!  Miraculously I made it up and down, and headed south ahead of the storm. 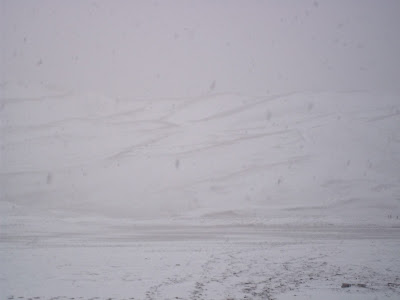 After finding a gas station and scraping off the layers of ice from my windshield, I was hungry and needed to relax my nerves.  I made it to the General Store in the blink-and-you'll-miss-it "town" of Villa Grove - a place Marilyn recommended would be a good pit stop along my route.  After a slice of "homemade" coconut cream pie I made my way to the Great Sand Dunes National Park & Preserve - at up to 750 feet, they're the tallest in North America, which is odd, considering they're a thousand miles away from the ocean.  The snowstorm was catching up to me as I reached the visitor center, and I sighed.  I tried to be patient as the people ahead of me were asking the ranger every question possible about the dunes.  Meanwhile, the snow outside became more and more heavy.  I finally received a map of the park, and got back into my car as fast as I could.  Alas, when I reached the trail-head to the dunes I could barely make out the snow-covered outlines through the storm.  I spotted a group of kids at the base of the dunes carrying a sled!  Oh, why couldn't I have thought of that?!  Not having the proper attire, I had no choice but to head back to the car.  I drove to a nearby nature trail where I could at least spend a little bit of time in the place I drove several hundreds of miles to get to. 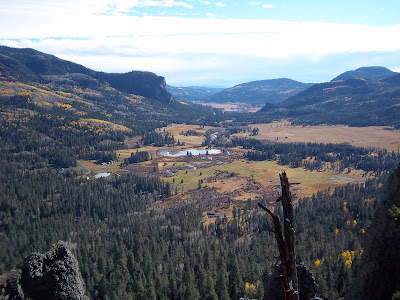 I made it out of the blizzard, and before long I was enjoying a sunny drive through the beautiful scenery on my way to the youthful mountain town of Durango.  The landscape was spectacular, and I couldn't help but pull off the road and take in all the majesty of the peaks, valleys, and waterfalls of the San Juan Mountains.

Before nightfall I arrived at Zach's - my couch-surfing host.  It was a very casual atmosphere, and he told me I could come and go as I pleased.  He introduced me to his cool friends that popped over, and he let me catch up on phone calls and emails, while him and his buddy played guitar.

Tuesday, October 26, 2010
Today I visited Mesa Verde National Park, which "offers a spectacular look into the lives of the Ancestral Pueblo people who made it their home for over 700 years, from A.D. 600 to A.D. 1300. Today, the park protects over 4,000 known archeological sites, including 600 cliff dwellings. These sites are some of the most notable and best preserved in the United States."  After getting my ticket at the Visitor Center and checking out one of the pit-houses (covered dwellings built partially below ground), I went on the one-hour, ranger-guided tour of Cliff Palace - the crown jewel of the park, boasting around 150 rooms occupied by an estimated 100 people at its peak.  I could not believe my eyes; it was one of the most remarkable things I've ever seen in my life. 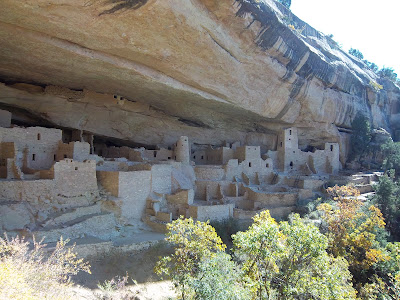 After the tour, I drove the 6-mile Mesa Top Loop Road, which showcases a number of pit-houses and overlooks of cliff dwellings.  Then I took a self-guided walking tour of Spruce Tree House, the best-preserved cliff dwelling, with 130 rooms and 8 kivas (a "ceremonial room" serving a variety of different purposes such as preparing food and making tools).  Before heading out I explored the museum, which showcases many recovered artifacts from the area. 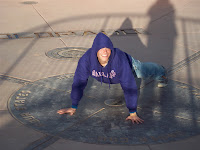 I was able to visit nearby Four Corners Monument before dark.  It marks the point at which Colorado, New Mexico, Arizona, and Utah meet.  I had a good time exchanging cameras with other tourists who engaged in some SSS - Simultaneous State-Straddling (oh behave!).