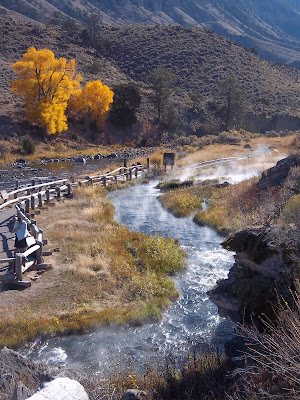 At around noon I arrived at Yellowstone National Park, entering the park from Gardiner, Montana.  Woo-hoo!  "Established in 1872, it's the world's oldest and perhaps most famous national park, known worldwide for its geysers and geothermal pools.  Yellowstone crosses volcanic plateaus and heavily forested peaks, containing 2.2 million acres of steaming hot springs, crystalline lakes, and thundering waterfalls."  This was my favorite national park yet!  Within 5 minutes of entering the park I saw a bighorn sheep meandering right alongside the park road!  At the advice of several Wyomingites I visited "Boiling River," which was awesome.  It's where a hot spring cascades into Gardiner River, creating a very unusual, very relaxing outdoor spa experience.  You just find yourself a spot that's the perfect temperature for your liking and enjoy :)  Moving on, I saw several families of elk right up close, relaxing between the buildings of the park headquarters.  There was also a curious [or hungry?] coyote. 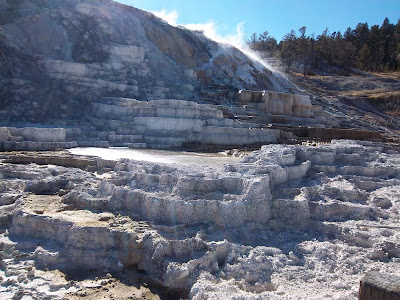 At the Mammoth Hot Springs Terraces I viewed a spectacular series of natural travertine limestone platforms, created when hot water ascends through the ancient limestone deposits.  "The water trickles over the edges from one to another, blending them together with the effect of a frozen waterfall."  Next I visited the Norris Geyser Basin - the "hottest, oldest, and most changeable of Yellowstone's thermal areas.  Here, "water accumulates underground, and is heated by Yellowstone Volcano.  The water travels upward to erupt from acidic geysers, rise from steaming fumaroles, and simmer in shimmering pools."  On my way to Lamar Valley I was stopped by buffalo in the road, lol.  In Lamar Valley I saw my first-ever wolf!  It was a beautiful gray wolf, sitting alert in the near distance.  Cool!  I ended the evening with a bang - Old Faithful geyser.  Of course, I found out from the ranger at the visitor center that it had just erupted a few minutes ago.  *Sigh.  Luckily, it erupted again just before dark, and I was able to witness it in all its glory!

In the evening I drove an hour west to the nearby town of Cody, named after legendary William F. "Buffalo Bill" Cody.  I met with Patricia, my couch-surfing host.  She introduced me to her family (dog and horses), we got acquainted, and she showed me to my bed - which was in her super nice camper, which I had all to myself!  It had been a while since I had a bed to sleep on; I slept like a rock:)

Friday, October 22, 2010
After breakfast (thanks for the eggs, Patricia!) I went back to Yellowstone via the Buffalo Bill Cody Scenic Byway which follows the North Fork Shoshone River through a landscape of spires and cliffs, pine forests and sagebrush, ranches and horses.

Once back inside Yellowstone, I spotted a grizzly bear grazing and rolling around in one of the wooded valleys!  It was incredible - and it didn't slice my face off, hooray!  Continuing on my way I saw a mud volcano, sulphur caldron, coyotes, bison, trumpeter swans, waterfalls, and "The Grand Canyon of Yellowstone."  This place is AWESOME.

Sharing the southern border of Yellowstone is Grand Teton National Park.  "Craggy, glacier chiseled, and rising up to 7,000-plus feet above the floor of Wyoming's Jackson Hole Valley.the dramatic peaks of Grand Teton National Park win America's topographical beauty pageant as the most photogenic of them all."  Apart from the scenery - think reflections of majestic mountains reflecting off beautiful, sapphire blue lakes - just above the southern boundary of the park I had my first-ever sighting of wild moose!  I saw not just one, but two! 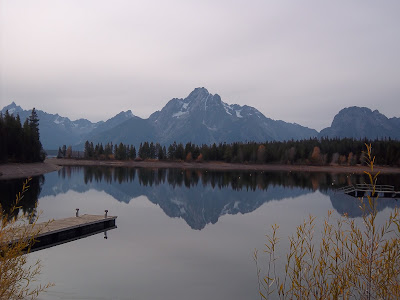 After the amazing evening of moose-watching, I drove to the nearby trendy town of Jackson.  "While the scenic 48-mile-long Jackson Hole ("hole" is what settlers called a high, enclosed mountain valley) fills with trophy homes and gated communities for celebrities and rich residents, Jackson itself retains a spirited Western character and encourages an egalitarian mix of ski bums, the moneyed elite, gung ho hikers and climbers, and even a real Wyoming cowboy or two.  Jackson's ground zero is Town Square, a small, tree-lined park with four entry arches made from thousands of shed elk antlers.  Surrounding the square are many of Jackson's top bars, restaurants boutiques, and dozens of art galleries." 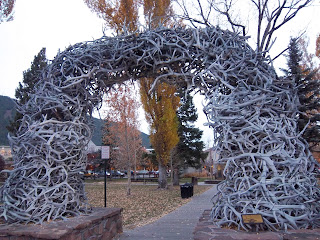 I explored the area of town square, and after refusing to pay a cover charge at Million Dollar Cowboy Bar, found myself very comfortable and amused within the loud, lively scene of Silver Dollar Bar and Grill in the historic Wort Hotel, which boasts 2,032 silver dollars embedded in the bar counter-top!  I immersed myself in the exciting atmosphere and delicious, contemporary cuisine, watching as couples made a dance floor to shuffle their boots to the entertaining live country music.  When it was time to turn in for the night I found a dark, quiet parking area of a small townhouse complex to get some rest.

Saturday, October 23, 2010
This morning I picked up a big, gooey brownie when I stopped for gas.  This is perhaps the most nutritionally-void breakfast I've had on the trip thus far, but hey, at least I'm breaking personal records, lol.  On an even more exciting note, lol, before leaving Wyoming I made a pit stop at an Abraham Lincoln monument, commemorating the Lincoln Highway, America's first transcontinental highway, which runs from New York to San Francisco.