About Me, and Arkansas 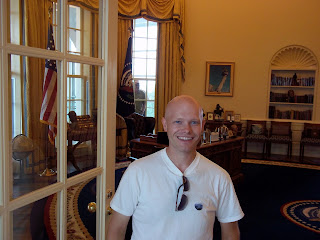 Wednesday, September 22, 2010
Located on the banks of the Arkansas River in the heart of Little Rock’s River Market District, The William J. Clinton Presidential Center includes America’s newest Presidential Library housing the largest archival collection in American presidential history.  Featuring 20,000 square feet on three floors of exhibit space, the Clinton Library chronicles American history at the turn of the 21st century.  It's the biggest and most popular of all the presidential libraries in the U.S.

After posing my secret service look in front of the actual '93 Cadillac Fleetwood presidential limousine, I looked around looked around a reconstruction of the White House Cabinet Room, the center of presidential decision-making since 1902.  I browsed the 13 policy alcoves which documents the daily schedule of the president for every single day of his two terms, and a interactive 110-foot time-line within which the history of the Clinton Administration unfolds.  Then it was just another day at the Oval Office inside the full-scale replica, and I explored the section of the library displaying exhibits about life in the White House (the splendor of state events, the spirit of holiday celebrations and how the Clintons made the White House their home).  Lastly, I gave my presidential address. 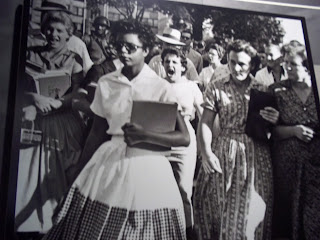 Before leaving Little Rock, I took a few snapshots of the capitol, then visited the Little Rock Central High School, a still functioning school and National Historic Site.  A place that even weeks later, sends chills down my spine as I sit here choking back the tears writing this.  I cannot remember being so moved by a place I have no ties to.   "Built in 1927 as Little Rock Senior High School, Central was named "America’s Most Beautiful High School" by the American Institute of Architects.  It was here, that in the fall of 1957, nine brave African-American teenagers faced great obstacles and angry mobs to desegregate it.  Ranging in ages from 15 to 17, these teenagers showed an enormous amount of courage and are considered civil rights activists - meaning that they fought for the right for children all over the country to attend the school of their choice regardless of their race.  The controversy in Little Rock was the first fundamental test of the United States resolve to enforce African-American civil rights in the face of massive southern defiance during the period following the Brown v. Board of Education of Topeka decisions. When President Dwight D. Eisenhower was compelled by white mob violence to use federal troops to ensure the rights of African-American children to attend the previously all-white school, he became the first president since the post-Civil War Reconstruction period to use federal troops in support of African-American civil rights.  Today, history remembers these students as the “Little Rock Nine.” Their actions showed the world that individuals who act upon their beliefs can change the course of history, and in 1999 the Little Rock Nine each received the Congressional Gold Medal-our nation's highest civilian honor-for their efforts to desegregate the school."

I think the reason this place is so moving to me is my own experience growing up different, desperate for equality.  As a gay man, I'm no stranger to torment.  During adolescence I knew I was different.  All the other boys abandoned the "cooties" stage, and started acknowledging their attraction for the opposite sex.  Growing up in a small town with churches on every block and no diversity, and knowing what happened to Matthew Shepard, I was scared to death of freely expressing myself or seeking guidance, fearing persecution or worse.  So I denied who I was, hoping it was just a phase I'd eventually come out of if I didn't acknowledge or act on my feelings.  I attended a Billy Graham "crusade" that I was invited to by friends I met in the community theatre, and I gave myself to god, confident that if I fully devoted myself to him, that I would change.  Over time I became a leader and example to the people of my church and youth group.  It felt good living with a mission; a purpose; being "righteous in his sight," and feeling a sense of belonging within my circle of church friends - even when deep down I knew that I, the homosexual, didn't belong, and never would.   It wasn't long before my righteousness became self-righteousness.  I was secretly judging people, keeping score of people's "wrongs" compared with my own.  It gave me a feeling of pride to "help them with their problems."  I've always loved people, and wanted to be embraced as "normal," whatever the heck that is.  I think that's the reason I started using humor; to win over people's friendship.  And why I loved performing.  On stage I captured people's full attention, and their applause made me feel special; above all the cruelty I felt by my peers.  I didn't care that people liked only the funny "on-stage Matthew" and not the true one.  I continued this way in high school, and tried to just brush off the overwhelming comments from classmates, but I started hating myself (if you can't beat 'em, join 'em), believing that they were right; that gay people are freaks in need of correction.  It was when I went to college and started hearing alternative viewpoints, that I started becoming unafraid to question things and express myself more freely.  And when I "got away" to Los Angeles I found my true identity, and met people who loved me for me.


Now, back to Arkansas!  =)
I arrived in Hot Springs this evening and just before ordering my din-din from Starbucks, I received a wonderful phone call from Pete, a CF host who said to come stay with him!  Like myself, Pete is currently taking a break from a ride on the corporate ladder.  He recently spent two months at Plum Village Buddhist practice center in France.  His interests are Farming/gardening, live music, live poetry, art, meditation, and peace.  Did I mention is backyard is the Hot Springs National Park?

I pulled into his driveway and there was Pete, bamboo stick in hand.  He didn't hit me with it so that was a plus.  He was just outside finishing his stretching.  He welcomed me inside his home and showed me to my own clean, tidy guest room. He delightfully whipped me up a delicious Asian tofu dish - with an Arkansas twist, lol.  Later he led me through his nightly relaxation exercises, which just about put me into a coma, lol.  My experience with Pete reminded me that I have a lot of energy, and I'm taking my cross-country trip by storm, and sometimes Matthew, you've just got to relax.  That's what Hot Springs is all about. 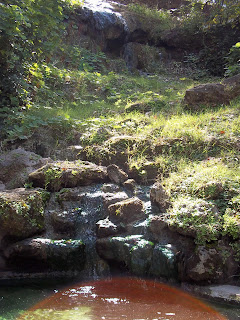 This morning I checked out Bathhouse Row, offering a unique glimpse into the role of Hot Springs in "The Golden Age of Bathing," and the health spa craze of the late 19th and early 20th centuries.  The eight bathhouses (four are still operational) are the largest grouping of such structures in North America and their architecture showcases a broad range of styles, including Neoclassical Revival, Renaissance Revival, Spanish and Italianate.  Next to the visitor center I saw the Thermal Water Station, where locals were filling up their crates of water bottles [for FREE!] with water from 4,000 year old natural springs!  How awesome is that?!

Afterward, I toured the Fordyce Bathhouse, considered to be the best in its heyday.  It operated from 1915-1962, when it closed due to declining business. It remained vacant until reopening as the park visitor center in 1989, allowing visitors to watch an orientation movie, shop the Eastern National store, and of course, tour.  As usual, I took so many photos my camera died, so I had an ice cream soda at a little shop across the street while I charged it back up.

Then I strolled the Grand Promenade, a half-mile-long, scenic walkway that runs north-south on the hillside behind Bathhouse Row, displaying the exposed 4,000 year old natural springs (too hot to wade in), and checked out the Stevens Balustrade, situated between the Fordyce and Maurice bath houses at about the center of the row - two stone pillars topped with bronze federal eagles mark the original main entrance to the Reservation and a wide concrete path leads up to the balustrade.  Before I left Hot Springs, I filled up a gallon jug of the delicious thermal water at one of the cold water filling stations.  A wonderful treat for the road ahead.