Rockin' Out in Tennessee

Tuesday, September 21, 2010
I got into Nashville around 1:30pm, so I grabbed some chow at Swett's, a landmark dating back to 1954, serving soul food cafeteria-style.  I entered the corridor of celebrity photos, grabbed my tray (cue the memories of high school hot lunches) and loaded up my plate with sweet potato pudding, squash casserole (heaven!), and peach cobbler.  After some people watching (the employees had shirts reading "Changing the world one piece of cornbread at a time") I checked out downtown, featuring honky tonks (the bars have live bands all day from noon to 2am), The Ryman Auditorium, revered as "The Mother Church of Country Music"where the Grand Ole Opry radio show is currently broadcasted, and the Country Music Hall of Fame and Museum.

Just 20 minutes south of Nashville, at the advice of Jodi, I visited Franklin, one of my most favorite small towns yet.  Named to Southern Living's "Best Small Town" top ten list, "it's as if a gentler time and place were captured and preserved in picturesque Franklin, nested among the foothills aof the Cumberland Mountains.  Centered on a statue of an unnamed Civil War soldier, the charming town square is a focalpoint of the immaculate 200 year old historic district, where slender church steeples rise amng the streetops and Main Street is lined with brick sidewalks.  Its quaint downtown offers a Great American Main Street experience, where scores of shops, art galleries, cafe's beckon visitors to linger." 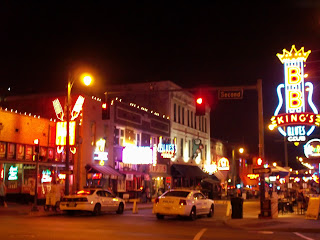 It was evening time when I met Alex, or "The Big Borowski" as I like to call him, my CS host in Memphis.  He greeted me in the parking lot of the university where he's attending graduate school to be a music teacher.  After making sure I parked in a spot that wouldn't give me trouble from campus security, I dropped my bags in his dorm room, and we were off for a fun night out on World Famous Beale Street, "Home of the Blues...Birthplace of Rock N' Roll."  The street is blocked off to allow patrons to walk around (most likely inebriated, lol) and cross as they please.  The music, smell of BBQ, and neon lights of the music joints and horse-drawn Cinderella-like carriages lured me right in.  Alex showed me a few his favorite spots including a little outdoor music stage, a second-hand store selling everything under the sun, and a bar with a play pen full of live goats.  Yes, live goats.  Soon we were getting acquainted over beer and crawfish nachos (smothered in BBQ sauce - in fact the waitress noted "we don't have salsa") in one of the many bars featuring live music.  Alex was hilarious.  He entertained my goofy sense of humor with the quick wit of his own, and we didn't hold back sharing each others' stories and view points, and were friends in no time. 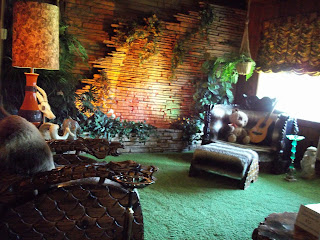 Alex slept in, while I made my way to The King's, i.e. Elvis Presley's Graceland!  The next two hours would be the most fun I've ever had touring a famous estate.  Elvis was wealthy, but he wasn't boring, and his home reflected that.  Instead of trying to impress people with lavish extravagances like gold paint (e.g. Biltmore's "The Breakers" summer cottage in Newport, RI), The King had his home designed to suit his own personal taste; a perfect example being "The Jungle Room," a tiki-themed room where even the ceiling is covered in green carpet, inspired by Hawaii, a place he loved.  Regardless of how tacky or kitschy the upper social classes may deem it.

"Step inside Graceland Mansion and follow in the same steps as Elvis himself as you enjoy an audio-guided tour featuring commentary and stories by Elvis and his daughter Lisa Marie. See where Elvis lived, relaxed and spent time with his friends and family. The Graceland Mansion tour includes Elvis’ living room, music room, parents' bedroom, dining room, kitchen, TV room, pool room and the famous Jungle Room.  After touring the Mansion, check out the other great parts of the 14-acre estate as you tour Vernon Presley’s business office and Elvis’ racquetball building. Also part of the Mansion tour you'll visit Elvis’ trophy building that houses an amazing collection of his gold and platinum records, as well as other great memorabilia from Elvis’ early career, his movies, his charitable endeavors and more.  The final stop on the tour of Graceland Mansion is Meditation Garden where Elvis and members of his family have been laid to rest."

*I'd like to note I saved myself the $10 parking fee by parking directly across the street at the souvenir shop!  =)