Georgia [Aquarium] on my Mind 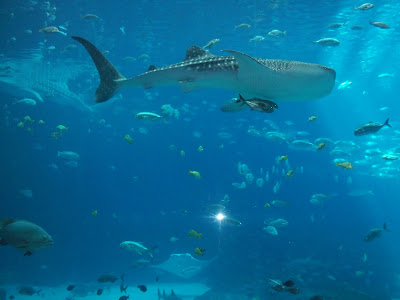 Wednesday, September 15, 2010
It was already evening when I got into Savannah, so I drove straight to the visitor center that was about to close, and delved right on in to check out the stuff on the map!  "An urban masterpiece, Savannah is America's best walking city, a living museum that is the largest National Historic Landmark District: 2.5 square miles hold more than 2,300 significant colonial and Victorian homes and buildings, most of them lovingly restored.  Savannah stands out for its leafy 1-acre squares that punctuate the district - 21 (out of an original 24) remain. America's first planned city, Savannah was laid out in 1733 on a perfect grid by it's founder, British general James Oglethorpe.  'White gold' (King Cotton) subsequently filled the port city's coffers with real gold, and handsome mansions prospered, those that survived the centuries eventually coming under protection of the Historic Savannah Foundation, born in 1955.  At President Lincoln's request, Savannah's fabled architecture was spared burning during Gen.  William Tecumseh Sherman's scorched-earth military campaign in 1864."

I had a ball taking in the sights of the historic buildings and beautiful homes, the fun bars and restaurants along The Waterfront, the  squares (miniature city parks with benches and statues) - one of which a fellow tourist pointed out was a location for a scene from Forest Gump, and the locations from A Midsummer Night's Dream.

While I was walking around this gem of a city, I received a wonderful phone call from Jeff, a local who generously offered me to come have a spaghetti dinner with him and his c-surfer that was staying with him!  I gratefully accepted, and had a great time with him and his CF'er. Great conversation, amazing food (it was the best spaghetti sauce ever!), and he gave me some helpful advice/feedback about some personal things.

After dinner I went to Ricki's, who was going to host me that night.  She's a real laid-back, friendly girl with a great sense of humor and a creative edge, currently majoring in fabrics (or something fabric-related; my memory escapes me) at the Savannah College of Art & Design.  She and her friends offered to take me out with them, but respected the fact that I was exhausted, letting me go to sleep after getting acquainted.

Thursday, September 16, 2010
My first stop when I arrived in Atlanta this morning was Flying Biscuit Cafe in Historic Candler Park, their original location.  It's a "down-home joint with a contemporary take on Southern cooking." Let me start by saying I'm a porker, lol.  I ate way, way, way too much!  I started with the orange-scented french toast topped with raspberry sauce and honey-creme anglaise, then adjusted my belt buckle to accommodate the Flying Fried Green Tomatoes dredged in seasoned cornmeal, topped with cashew-jalapeno relish and goat cheese, then onto the "Award-winning creamy, dreamy, southern-style grits," and of course their signature biscuit with apple butter.  PHEW!  Doctor, am I dead yet?!

After they lifted the roof and picked me out by crane, I walked off some calories at Centennial Olympic Park, the "focal point for the 1996 Summer Olympics."  Then I went to the Georgia Aquarium - the best aquarium EVER!  I waited until 3pm, at which point admission was a measly $15 with the student discount.  "Built in 2006, it is the largest aquarium in the world.  A 9-acre state-of-the-art facility with a staggering 8 million gallons of both fresh and salt water that contains more than 100,0000 different animals, representing over 500 of the planet's marine species."  My very favorite exhibit was The Ocean Voyager, which currently contains four whale sharks - the largest species of fish in the world.  The exhibit provides the second largest viewing window in the world "at 23 feet tall, 61 feet wide, and 2 feet thick."

I did not, however, have a pleasant experience upon reaching my car afterward.  There was a rediculous fine of $25 on my windshield for "parking within 20 feet of a crosswalk."  No painted curb, marker or sign, not a single indication that it was an illegal parking spot!  I checked the hours on the back, and knowing they closed in 30 minutes and were closed all day tomorrow (Friday, when I would be leaving town), the next 3 miles to the court was grueling.  The entire downtown was completely grid-locked.  I finally reached it, fed the meter, and was met by a door being locked just as I had approached!  They closed 3 minutes early, argh.  Not that I could've done much with those 3 minutes anyway, but grr.  I would spend the next several days sending forms and emails to a handful of people at the court, my case pending...

I walked off some stress at the huge, 185-acre  Piedmont Park, and got to talking with Jonathan, a guy who without ever knowing be before, told me:  "If you ever get into an emergency situation and need money, let me know."  I can't remember my exact words, but hey would've been something along the lines of "WOW, that's amazing of you."  He replied, "You're traveling the country, man."  Jonathan my friend, you simply rock the hizzy.

I walked over to a nearby Caribou Coffee, where I met another friendly fellow, Brent, who took me out for a drink and conversation at his favorite local watering hole.  Where do these amazing people come from?

At the end of the night, I received a surprise phone call from a "Nomad Kim" a cool Vietnamese chick replying YES to a last-minute CF request I had sent out.  She was my perfect host-surfer match too, because she said she was too exhausted to entertain, to which I replied, "You have no idea," lol.  She invited me into her tidy, very zen home, where she lit incense, lowered the lighting, put on some mellow music her previous foreign surfer gave her (no, I'm not going there, get your head out of the gutter, lol).  I looked around and complimented her on the patio, which looked Moroccan-style, to which her eyes lit up and replied "YES!  That is EXACTLY what I was going for!"  After not entertaining each other, lol, I got in some much-needed zzz's.

Friday, September 17, 2010
This morning I headed North to Dawsonville, where I checked out the Amicalola Falls, the highest cascade East of the Mississippi, measuring in at whopping 729 feet!  The I passed by a gajillion apple farms, and, not yet having my Georgia peach, thought I'd give it a shot at Mack Aaron's Apple House, boasting "11 kinds of fried pies," including coconut!  They were selling the apples in bushels, and the peaches in big bags.  I really didn't want that much (and it wouldn't stay fresh on the road).  I paid for a peach pie, and then returned a second later, asking the lady if it would be okay for me to buy only a few of each.  She smiled and said no prob, and when I grabbed my apples and peaches, she kindly said "Honey, I'll let you have 'em."  She insisted, and I gratefully accepted.  I hope it wasn't because she thought I was some neo-nazi that would've otherwise robbed her.  You never know what people are thinking with my head being shaved, lol.  :P  Then I saw a road-side stand where a guy was selling the ever-popular Southern snack of boiled peanuts.  I thought, well I'm heading north now, I may not have many more chances to try 'em, so I stopped and he sold me a couple bags, the traditional salty kind, and the hot n' spicy, which were definitely hot n' spicy indeed, heh heh.