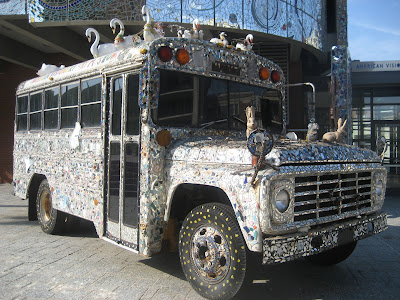 Wednesday, September 1, 2010
This evening I arrived in Ellicott City, about 30 minutes from Baltimore, where I decided to stay after several warnings from people that I might get mugged, shot, etc, if I stayed in Baltimore.  Valuing my life and limited budget, I gratefully heeded such warnings, and arrived at Greg's house in Ellicott, where I was greeted by his chill roommate, and after a quick show around the place, his friend Carol arrived, and the three of us headed to a local bistro & brewery, which imports the finest ingredients from the four corners of the globe to deliver the finest beers in the region!  We had an excellent time chumming it up and laughing to tears over hilarious banter, and I tried Greg's beer, called "Flying Dog Raging Bitch Belgian," LOL!  It's 8.3% ABV comes with the description: "Bitch please.  This thing has more bite than a rabies infested Rottweiler in heat."  After which I choked down my "chocolate" beer, which tasted like black coffee.  *Gag*  To wash it down I ordered a Brewdog Tokyo - an exclusive 18.2% ABV beer, which unless you travel to another country, this is the only place that serves it this year!  You see, each year the manufacturer allows only one establishment in each country to get it's hands on it!  Thanks for the experience Greg!  At the end, generous Greg insisted on paying for my meal, and the three of us went back to his place for more great conversation (and liquor), intent not to let the night die down.


Thursday, September 2, 2010
I got up and ready for the day before Greg.  Not that it was a contest, lol, but I wanted to be ready to go in case I were to leave at the same time he would leave.  Of course, when he woke up he told me I could feel free to let myself out and lock the door behind me whenever I'd like.  I gave Carol a call like she had instructed, so that we could visit Baltimore together.  I parked in Little Italy, and we went to the National Aquarium, where a new exhibit, "Outback, showcases  Life Down Under, and is the only exhibit of its kind in America," and the highlight of my Baltimore experience - The American Visionary Art Museum, one of the most unique and exciting museums I have ever been to, and it was also a first time visit for Carol, who was equally impressed.  "If the word museum conjures up images of endless hallways lines with armless statues and ornately framed paintings of long-dead dowagers, does Baltimore have a treat for you!"  By its own definition, the museum is dedicated to "art produced by self-taught individuals, usually without formal training, whose works arise from an innate personal vision."  This oddball "outsider art" fills six galleries in the three-story main building; the outside and the two other buildings hold the much larger art.

I had a wonderful time getting to know crazy Carol.  Crazy FUN, not psychotic, schizophrenic crazy, although that would be entertaining too, lol.  She has a big heart, she's lots of fun and loads of laughs, no wonder Greg and her get along so well.

When I got back to Greg's, he took me to Historic Ellicott City, a mill town settled in 1771, where we walked up the old main street, which features fine dining, bars and breweries, coffee shops,  and a large selection of antique shops, amongst the historic buildings.  We hopped around to a few different places for pub grub and drinks, as we got more familiar with one another.  He's a great conversationalist, very easy to talk with, and before the night was over I felt like I'd be leaving a good friend or brother in the morning.  Maybe our paths will cross again someday.  I hope so.