There's No Place Like [the Lefto] Home in Kansas 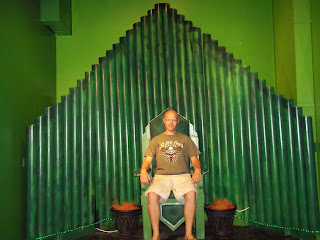 Today was the Smithsonian's 6th Annual Museum Day, a day when anyone can go to the website, find their favorite museum across the country, print out the coupon, and go - for FREE.  Thank you Smithsonian  =)  So since I was going to Kansas, the most logical museum of choice was the Oz Museum, a little museum (in a little Wamego) housing 2,000 artifacts dating from 1900 to today.  I was looking forward to movie memorabilia, but mostly it was stuff from Frank Baum's children book and collectibles like lunch boxes and barbies, and [cheesy] set reproductions.  It's a great little museum for people that appreciate the book.  I just had other expectations is all.  I'd also like to add that the people of the museum were honest.  When I called to ask how much it was, they gave me the prices and added that they were participating in Museum Day (I had no idea that existed before they told me), so if I came in today, it would be free.  I know of places that unfortunately wouldn't be so forthcoming about tips for free admission.

A few hours later, I arrived at Justin and Kara's in Wichita.  We've lost touch over the years.  We were leading different lives back then.  I was only in high school, and Justin and Kara didn't yet have children, then I loved to Los Angeles where I  matured quite a bit and really came into my own, as they moved to Florida and later to their present home in Kansas for Justin to advance his career.  I do have memories of their first-born son, Jakin, which almost a decade later I decided to share with my old friends as we got caught up in the living room of their new house.  He was only an infant when we were driving along and I (sometimes being quite animated) threw up my hands and exclaimed "Ugh," immediately prompting a resounding "UGH!" from baby Jakin back in his car seat, with his hands in the air and a big smile on his face.  "It was cute the first five seconds before it grew annoying as you guys continued it back and forth for quite some time after," Kara recalled, chuckling (or maybe I was the only one chuckling, lol).  Well Jakin's quite a but older now, and this was my first time meeting Asher, and Eli, their youngest.


We enjoyed a delicious tilapia dinner Kara prepared, then they all took me for a walk around their neighborhood and pointed out the vacant house where until recently, their very good friends lived.  They're very missed, and as we moved on down the street Asher took an extra moment to remember them.  Not enough time has passed for Justin and Kara to feel like Kansas is "home."  I know what it's like to move to strange place where you don't know anyone.  New friends are like family, so I can imagine how difficult it's been for them to readjust since their absence.  About a quarter-mile away from reaching their place, it suddenly grew black, windy, and rainy, and I thought to myself "Auntie Em, it's a twister!"  The street lights started going out, and sure enough when we hurried inside the power was out.  I thought to myself, "Yay!" my inner child proclaimed.  We spent about the next hour playing a group game where we all tell a story, each person going around saying one new line; every story ending the same way with Eli enthusiastically calling out "boogers!"  Ahh, kids.  The power came back on and I finished out the night by reading a chapter from the boys' book to them.  Jakin read along with me in his own copy, so that he could chime in with corrections to any mistakes, Eli would chime in too with his ever-popular "boogers!" and as I put my different story-time voices to work, Asher paid me the perfect compliment: "You're weird.  That's what I like about you."

Sunday, September 26, 2010
I caught up on some much needed R&R, and made myself a fruit & yogurt parfait while the Leftos attended church.  When they got back home I started a load of overdue laundry and Kara said, "Matthew come over here.  Look at this."  She was planning a trip to the grocery store and about to print off a coupon, when I hunched over her computer and saw the World Market website advertising a can of "Spotted Dick."  Not long after thanking Heinz for the belly laughs, Jakin came over and asked what was so funny!

About 20 minutes later Kara and I arrived at World Market for a little "shopping," but really we wanted to take a look at this stuff for ourselves, lol.  We searched high and low for the British treat, and finally we spotted the dick (so to speak).  Alas, World Market was not playing an immature prank, for there was the dick pudding, alive and well, safe and sound within its canned walls.  A couple photos and a cash register trip later, we were back at the Leftos for more family fun, heh heh.  *Note:  Hospital managers at Gloucestershire NHS Trust and the catering staff at Flintshire County Council renamed the pudding Spotted Richard on menus because of the use of Dick in the name, which is short for "Richard" but also slang for "penis". Gloucestershire NHS Trust restored the original name in 2002. Flintshire County Council reversed their renaming after a few weeks.  Get the scoop here.

Even with running behind schedule, Kara was Sonic-bound after I confessed I hadn't yet eaten at one.  She made it her mission get Matthew some [Sonic]!  After a Sonic beverage binge (they have all kinds of fun flavored soda pops and shakes - I ordered a pineapple one) and food frenzy of mozzarella sticks, Thai kettle chips, and Mexican Layered-Dip pringles, and a horse and buggy sighting (Amish country), we arrived (on time) at the Kansas Underground Salt Mine & Museum, one of the "Eight Wonders of Kansas."

"Hutchinson seized the unique opportunity to provide a destination attraction for the citizens of Kansas, the United States, and the world to explore an exotic environ carved from salt deposits formed 280 million years ago, 650 feet below the surface.

In the United States there are 16 salt mines but Hutchinson is the only one, in fact the only one in the Western Hemisphere, that has an underground museum open to tourists. There are only two other underground salt museums in the world and they are in Poland and Austria. People from throughout the country have clamored for an opportunity to visit the Hutchinson salt mine. 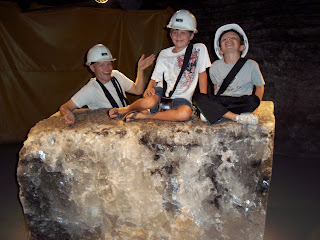 Our adventure began with a 5-minute safety video with about 82 easy steps to safely use our equipment, lol, then we boarded a double-decked elevator taking us 650 feet down.  After an introduction from the docent, we were free to wander through exhibits that tell the story of salt mining, the geological history of the area, and how these vast salt caverns under Hutchinson have been used to store over seven million documents, including the largest underground vault of films and movie memorabilia.  And they are proud to note that the world’s oldest living organism, estimated to be about 250 million years old, is now living at the Kansas Underground Salt Museum as part of its newest exhibit featuring the unprecedented discovery of living bacteria found trapped inside a salt crystal.  Lastly we took "The Dark Ride," where we boarded a tram that into the black abyss to explore the mined out areas where we saw naturally occurring geologic formations and artifacts left behind by miners over the last of 85 years.  One tram stop was the mound of salt crystals, where we were able to pick out a free souvenir for ourselves =)

We snapped a few photos of the nearby Cosmosphere and Space Center, then we grabbed dinner at Chili's, where we received a free extra order of mozzarella sticks, just because one of them was hollow.  Rock on!  And I noshed on my salad and pizza I ordered off the children's menu (aren't I just adorable?) as we conversed, while the kids colored.  It was my last night there, so when we arrived back home they put the kids to bed and we had a nice time spending the next hour having some adult time.  I said my goodbyes to Justin, who would be leaving for work before I got up, and went to bed.

Monday, September 27, 2010
I continued to try and help Kara with her computer (we've been trying things the past couple of days, since some wacky behavior resembling a virus are taking place), opened a can of dick with her (one spoonful was enough for her), and we said our goodbyes. 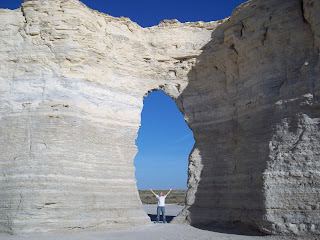 By early evening I arrived at Castle Rock, an unusual, fragile outcropping of limestone, chalk and shale formation reaching toward the sky out of nowhere, which may not last many more years. The tallest spire fell following a thunderstorm in 2001.  About 40 miles west, things get even more interesting as you enter "The Badlands" of Kansas," an area of chalk bluffs, chalk flats, and chalk pinnacles known as the Monument Rocks or the "Chalk Pyramids," and made famous for its fossils dating back eighty million years ago, when the region was an open ocean brimming with calcium-shelled microscopic animals, giant oysters, sharks, bony fish, and reptiles swimming and flying overhead."  I felt worlds away from home getting a look at these things; my camera could not keep up!  How awesome!