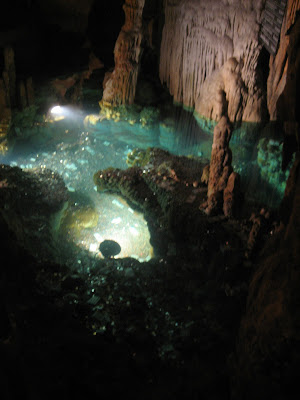 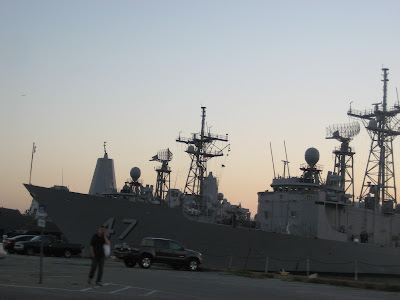 Monday, September 6, 2010
Taking Carrie's advice, I drove through Staunton this evening.  It's a lovely little town where Woodrow Wilson was born, full of 19th century architecture and FIVE National Historic Districts!  I snapped a few photos and drove a little further in Waynesboro, where I parked it for the night.

Tuesday, September 7, 2010
Taking more of Carrie's good advice, I toured the spectacular Luray Caverns in the Shenandoah Valley this morning.  "They're one of the most-visited caves in the East, with nearly translucent stone drapery, a 170-ton fallen stalactite, and the 2,500 square-foot Dream Lake, among many other impressive features."  And let's not forget the "stalac-pipe" organ, "which uses electronically controlled rubber mallets striking natural stalactites to produce tones covers 312 acres, earning it a listing in the Guinness World Records as the world's largest instrument."  Awesome!

Then I made my way into Norfolk to visit my buddy Jesse who's in the Navy!  We caught up at Tropical Smoothie, where I met his friend and his roommate, and I got to see his digs (right on the beach!), and then he took me to his Naval Station where I saw the awesome fleet of ships.  It was great =)

I drove to Zane's (he would be hosting me the next couple of nights), a laid back researcher for Peta (their headquartered in Norfolk) and got acquainted with him, his cool neighbor friend James (the kind of fun dude who maintains a Facebook photo album called Learn to Park Asshole, lol), and Zane's super sweet yellow lab, Molly Barksdale, lol.


Every day of my trip keeps getting better and better *big smile* Life is amazing.

Wednesday, September 8, 2010
Zane went to work and James came over and picked me up.  Last night he told me he'd have today off to show me the area.  We grabbed breakfast at Sugar Plum Bakery in Virginia Beach.  From the looks of it you think you're just visiting a typical spot for sweets, but in fact this is not your ordinary bakery.  It's actually a not-for-profit organization following a demonstration grant award from the U.S. Department of Health and Human Services, Administration on Developmental Disabilities, whose mission is "to serve the needs of persons with disabilities through employment, education, and training."  Very cool.


My Von Deutch hat died, so we got myself a wide-brimmed insect-repellent hat from the local sporting good store.  I may look absolutely ridiculous in it (YEP!), but it'll keep the sun off my face, which is all I care about.  Function over fashion, people.  Then we went to Pelon's Baha Grill for "the best fish tacos East of the Pacific Ocean."  We took 'em to go so we could devour 'em at the beautiful beach around the corner.


We took Molly for a walk, but she refused to poop!  I knew you'd want to know that.  We chilled out at James' place, and he we got to talking about hammocks, so naturally he grabbed his hammock and set it up right there in the living room above the couch for me, lol!  Thanks James, you're the man!

Then I went to Jesse's after he was done with work.  We went for a walk on the beach and spotted a washed-up jellyfish.   It was awesome and I wanted to touch it but Jesse freaked me out when he said it could maybe still sting me.  Sting me?  Big deal.  It's nothing a little urine can't fix, lol!  Why are all my first encounters with animals roadkill (now beach kill)?!  The armadillo, coyote, jellyfish...  I love nature, but c'mon!  Then we went to Hooters for some apps.  Our server was beautiful and we got real chummy, and I felt a little guilty that she was barking up the wrong tree, so to speak, lol.

I said goodbye to Jesse and he sent me off with two CDs!  One was a mixed CD of techno club music.  Jesse LOVES club music, and especially mash-ups (two songs put together), and he's always up on the hottest songs (thanks for keeping me current Jesse!).  The second CD was Johnny Dangerous.  I hadn't heard of him and Jesse couldn't have me leave without getting a taste of this first and original X-Rated, Raunchy Hip-Pop Star!  All I can say is it's not music for shy people, LOL.


I got back to Zane's and we talked late into the night about all kinds of stuff.  Couch-surfing is an amazing experience all on its own.  All of these wonderful hosts are unique, fascinating individuals that have something I can learn from, and it's literally changing my life.  Thank you world.  =)