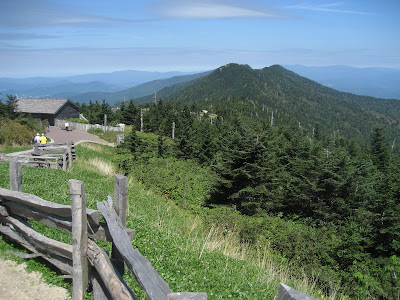 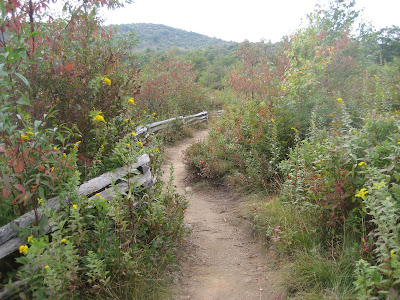 Thursday, September 9, 2010
This evening I arrived in Asheville, North Carolina, "a haven for progressive and creative spirits: artists and craftsman, New-Agers, musicians, retirees, environmentalists.  It's also a terrific base for outdoor enthusiasts, with outstanding hiking, white-water rafting, and golfing."  My first visit was to Borders Books, lol, to get a plan together.  I decided to stay at Bon Paul & Sharky's Hostel, where I was able to set up my new tent in the backyard, yay.  Setup was a snap, and I grabbed a shower and went into town to check out the local nightlife.  I went to LaRue's "retro trailer cocktail lounge", which I figured would be dead at only 8:30pm - I was right, lol.  I could count the number of patrons on one hand, but the bartender was nice, the beers were $2, and the kitschy decor was very amusing, with everything from lava-lamps to cake pans on the wall, LOL.

Then I visited Scandals, "three stories and four bars that caters to a young hipster crowd."  I was in luck!  It was $5 bottomless beer night, so there were a lot more people there.  I stayed downstairs mostly, where I listened to the live bands and chatted with the cool bartender chick "Mogley," who recommended some things to do in Asheville.  On my way back to the car I was approached by a sketchy dude who asked me "what I was into."  Wanting to tell him "not YOU," lol, I kindly replied with "nothing," and walked to my car, luckily avoided any more creepy hassle.

Friday, September 10, 2010
After sleeping like a baby in my lovely new tent, I packed 'er up, grabbed a complimentary continental breakfast from Sharky's (did I mention it only cost $15?!), and set out for the day, starting first with a visit to the hallowed Biltmore Estate, the mesmerizing mansion I first laid eyes on when I saw the movie Hannibal (I'm a BIG fan of the Lecter series).  I got as far as the gatehouse (big enough to be my home, lol), because I wasn't going to pay the steep admission fee, and they wanted $45 just so I could take a few photos of the exterior.  Forget it, I can just save photos from Google images to my computer instead if I wanted :P

It was time for the main event, the Blue Ridge Parkway, which was celebrating its 75th anniversary.  I headed North first, where I took photos from Mount Mitchell - the highest point East of the Mississippi.  At 6,684 feet, the observation deck offers amazing views, in fact, six peaks in the small range are among the ten highest in the eastern United States!  Then I made my way South to Looking Glass Falls, Looking Glass Rock, and some awesome hiking in Graveyard Fields (isn't that a cute name?, lol), covered with the beautiful colors of Autumn.


I grabbed some awesome fish nachos at Salsas Mexican Caribbean Restaurant.  They have the most mouth-watering, creative cuisine of any Mexican restaurant I've been too, and the food is all fresh; the menu changes daily.  I counted TWELVE different dishes I wanted to try!  Then I watched a street performer for a bit, and walked down to check out something going on in the park just a couple blocks away.  It was the Clips of Faith Beer and Film Tour - an annual tour sponsored by Craft Beer, benefiting Asheville on Bikes, with short films on beer & sustainability.  It sounds like a Christian film festival but “Lips of Faith” is a New Belgium beer line, lol.  When it ended I revisited LaRue's, and, being Friday, was a lot livelier than last night, and I got to talking with Garrett, a friendly ex-military dude, who after hearing about my travels, generously offered for me to stay with his family!

Saturday, September 11, 2010
This morning Garrett didn't want to send me off with an empty stomach; he made me a delicious brunch of eggs and grilled shrimp!  Him and his fun wife Jennifer and I joked around for a while, then it was time to move on.  I thanked them for all they had done for me, exchanged information to keep in touch, and I was back on the road.