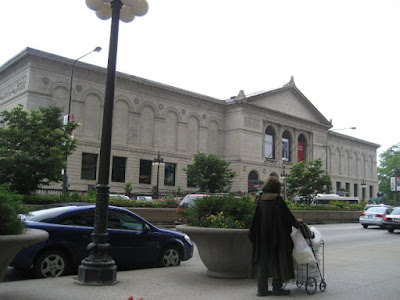 "The Art Institute of Chicago is the crowning glory of Chicago's lakefront. Opened in 1879, The Art Institute is one of the country's premier art schools, with alumni ranging from Thomas Hart Benton and Georgia O'Keeffe, to Orson Welles and Walt Disney. More important to the visitor who doesn't plan on taking classes, it houses one of the world's greatest art collections, some 260,000 works spanning five millennia, in a handsome beaux-arts structure built for the 1892-93 World's Columbian Exposition."

The modern wing was added in 2009, making the Art Institute the second largest art museum in the country, behind New York's Metropolitan Museum of Art. The modern wing is the seventh major addition to the museum since 1893.

It was my first visit to the Art Institute, and it was my mission to view all the highlights! Mission accomplished:

El Greco's Assumption of the Virgin