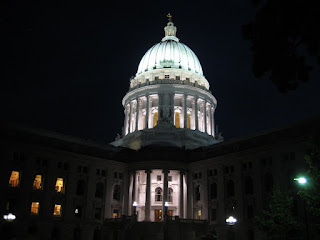 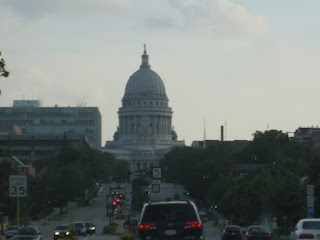 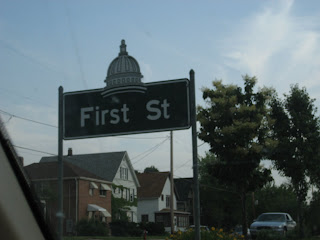 Madison really shows off its capital, if ya know what mean, lol. For all you drunk drivers out there, when you forget where you are - the street signs with a big capital icon will remind you what city you're in. What a courtesy, lol.

Seriously though, the capital is beautiful. It stands tall and proud above the city streets, and fills the night sky.

- In 1996 Money magazine identified Madison as the best place to live in the United States. It has consistently ranked near the top of the best-places list in subsequent years, with the city's low unemployment rate, a major contributor.
*I am, however, guessing that after 1996 they realized the pitiful wi-fi and AT&T situation I mentioned in an earlier post, lol!

- City voting patterns have supported the democratic party in national elections in the last half-century, and a liberal and progressive majority is generally elected to the city council.

- Madison is also home to the Freedom from Religion Foundation, which attempts to influence government in matters relating to the separation of church and state. The foundation is known for its lawsuits against religious displays on public property, among other things. In recent years, they have made removal of In God We Trust from American currency a main focus.

-The world's largest congregation of Unitarian Universalists, First Unitarian Society of Madison, makes its home in the historic Unitarian Meeting House, designed by one of its members, Frank Lloyd Wright.