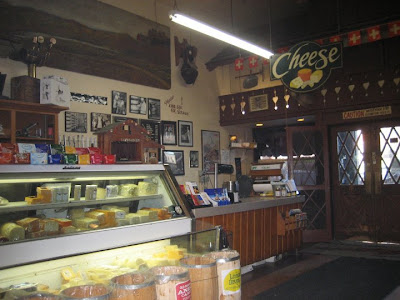 "In the 1800s, the lush rolling hills and river valleys of south-central Wisconsin were an irresistible lure for thousands of Swiss, German, and Scandinavian dairy farmers eager for fertile farmlands that reminded them of home. Today this area is the heart of Wisconsin's dairy land; a postcard-perfect rural environment where cheesemaking remains a generations-old fine art."

I explored New Glarus (little Switzerland!). As the official marker reads, "In 1845 the Emigration Society of the Canton of Glarus, Switzerland, sent Nicholas Duerst and Fridolin Streiff to the United States to purchase land for a Swiss settlement. They were joined in August by 108 settlers who began their homesteads on 1,280 acres of farm and timber land bordering the Little Sugar River. The first years were hard and it was not until April 1850 that the town was organized. Then New Glarus began to prosper; in 1851 the first store opened, in 1853 the first hotel and in 1870 ther first cheese factory. By 1892 the population had increased to 600. The culture of Old Glarus has not been forgotten; the Swiss-German dialect is spoken and the traditional holidays are observed."

I strolled through the town and snapped photos of the old buildings and Swiss & German themed restaurant menus (and interestingly enough found fried gator tail at the place I ended up having a snack!). I ate dinner (fried local cheese curds, mmm...) at Toffler's Pub & Grill (1880). Even the street signs are Swiss-German!

Today I visited Monroe (Specialty Cheese Capital of the U.S.!). More than 20 farmer-owned operations still churn out cheese in the area - predominantly varieties of Swiss, but also Gruyere and even Limburger - reportedly the nation's only remaining Limburger maker.

Downtown is where you'll find several cheese shops, lined with the most beautiful Victorian architecture, and anchored by the red Romanesque Green County Courthouse. This is the most lovely little town square I have ever seen! It felt like I was in the middle of fairy-tale land, really!

Monroe is also where you can take a tour of Minhas Craft Brewery; The Midwest's oldest brewery, since 1845!

I stopped in at Baumgartner's Cheese Store & Tavern, Wisconsin's oldest cheese shop since 1931. I ordered the cheese sampler comprised of mild cheeses - Brick (gets its name from being shaped like bricks, and in the olden days was pressed by bricks to squeeze out the moisture), Swiss, and Cheddar, and I received a sample of the nastiest cheese in existence: Limburger. I swear to god it smells like they take it from the wrong place of the cow, and it tastes like it too. Yuck.

On the way back home, I snapped some shots of classic dairy land. After returning to the motel I helped myself to a bottle of Wisconsin Begian Red that I got from Baumgartner's Cheese Shop - Wisconsin Ale brewed with cherries, made at the New Glarus Brewing Company! The label reads, "You hold the marriage of wine and beer. Belgian Red is a tapestry of flavor. This ale is brewed with whole Montmorency Cherries, Wisconsin farmed wheat and Belgian roasted barleys, balanced by hops we aged in our brewery one full year, and then aged in oak vats. Over a pound of Door County cherries (hollah! I love me some Door County!) in every bottle makes this ale uniquely "Wisconsin." So unique, in fact, that we applied for a patent. Expect this ale to be ruby red, with a medium body that is highly carbonated and intense with cherry flavor and bouquet. Serve your friends Belgian Red in a brandy snifter or champagne flute and toast life with ale from the land of Wisconsin. Vielen Dank! Daniel & Deborah Carey."