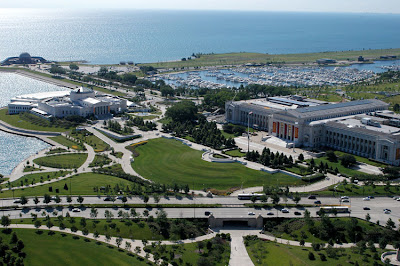 "The 57-acre Museum Campus, one of Chicago's newest lakefront attractions, unites three of the city's oldest institutions. Located at the southern edge of Grant Park, it opened in 1998 after the city rerouted the northbound lanes of heavily trafficked Lake Shore Drive and replaced the asphalt with terraced gardens and walkways connecting the Shedd Aquarium, The Adler Planetarium, and the Field Museum.

Opened in 1930 thanks to the munificence of John G. Shedd, the stock clerk who became president of Marshal Field and Co., the Shedd Museum is one of the oldest aquariums in the world and was only recently surpassed (by the Georgia Aquarium) as the largest one indoors. The extensive facility and its 5 million gallons of water are home to 22,000 animals - over a million the staff will tell you, if you count all those tiny coral polyps. They come in dizzying variety, with sharks and rays, frogfish and parrotfish, and an octogenarian Australian lungfish names "granddad," the oldest fish in any aquarium anywhere. Among the more recent additions are the Oceanarium, with its belugas, otters, and other mammals, and the Wild Reef exhibit, which provides diver's-eye views of the sharks through 12-foot-high curved windows.

Built in 1930 as the first modern planetarium in the Western Hemisphere by Max Adler another philanthropist who made his fortune in retail, The Adler Planetarium is home to one of the world's finest collections of astronomical instruments and rare books.

Established in 1893, the Field Museum was funded by Marshall Field, founder of Chicago's legendary department store. The museum's encyclopedic collection covers subjects as wide-ranging as evolution, ancient Egyptian funerary customs, and Plains Indian life, but the most famous of its holdings is Sue, the world's biggest and best-preserved Tyrannosaurus Rex."

Of the three institutions, I had the pleasure of visiting the Field Museum and the Shedd Aquarium. The Field Museum is HUGE. There are many exhibits; most were massive, and every time I rounded a corner there was more to see. Like the Art Institute, it is magnificent, and one can easily plan to spend an entire day here.

The temporary exhibits I explored were Mammoths and Mastodons: Titans of the Ice Age, Insects: 105 Years of Collecting, and one of my favorite, most interesting exhibits I've ever viewed anywhere was the traveling version of Kip Fulbeck: Part Asian, 100% Hapa: "In a world that is used to categorizing people by a single identity—race, ethnicity, age, religion, etc.—how do we define the in-between?

A label meaning ‘half’ in Hawaiian, hapa serves as a term of pride by many whose mixed heritage includes Asian or Pacific Island descent. Artist Kip Fulbeck posed the common question “What are you?” to people of mixed ancestry in the exhibition kip fulbeck: part asian, 100% hapa. The answer to this question is a display of complex personal and social identities expressed through photographic portraits paired with the subject’s own hand-written, frank and funny responses.

A moving demonstration of self-expression, this new perspective encourages people of every background to question what makes them who they are. Celebrate your own heritage, and discover what it means to be multiracial/multi-ethnic in America today, at The Field Museum."

View video of the Shedd Aquarium's seal in the "Fantasea" show:

View video of the Shedd Aquarium's penguins in the "Fantasea" show: