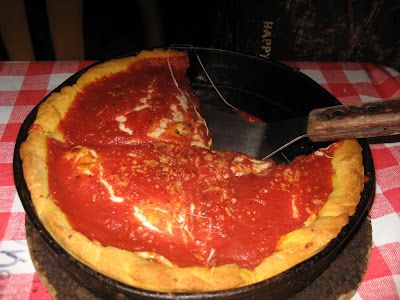 Chicago-Style Pizza: "Pie in the Sky"

"Ask ten Chicagoans who makes their favorite pizza, and you'll get as many different answers. With an estimated 2,000-plus pizzerias in around, they take pride in their pie here; from small, family-owned neighborhood joints to popular downtown draws to suburban chains, pizza is to Chicago what strudel is to Vienna. The dominant style is deep-dish a pizza-meets-casserole well over an inch thick that is generally what people mean by Chicago style. Credit for it goes to Texan Ike Sewell and Italian-born restaurateur Rick Riccardo, who came up with a Midwest-friendly twist on the Neapolitan version, with a thicker crust and loads of cheesy topping.

With its first truly American pizza, these two men opened Pizzeria Uno in 1943 in a Victorian brownstone in the River North section of Chicago. It became so popular that, 12 years later, Pizzeria Due (same owners) opened in another Victorian a block away. Both have the same 1940's-vintage walnut veneers and black-and-white-tiled floors, and both are still immensely popular."

What to expect from Chicago-style pizza, appearance-wise? Crust, topped with cheese and choice toppings, followed by the sauce LAST.

I took the advice of travel books, Chicagoan friends and locals, and tried the best pizza the city had to offer. I visited Bacino's, Renaldi's, Gino's East, Lou Malnati's, Giordano's, Pequod's and Pizzeria Uno. My favorite hands down is Pequod's, thanks to their caramelized crust - baked in cast iron pans, blackened by decades of seasoning. I wish I could go in there and just order the crust! Yum! Second place is tied, and goes to Gino's East and Renaldi's. At Gino's East I managed the biggest string of cheese I've ever stretched from pizza to plate - I had my plate practically above my head with the cheese reaching from that slice on the plate all the way down to the pan on the table - I also enjoyed their sweet, yummy cornmeal crust, and they had an adequate amount of sauce, which isn't the case at many pizza places. At Renaldi's I couldn't devour the slice of Sicilian-style pizza fast enough (not Chicago-style, but needs to be recognized nonetheless). So good.