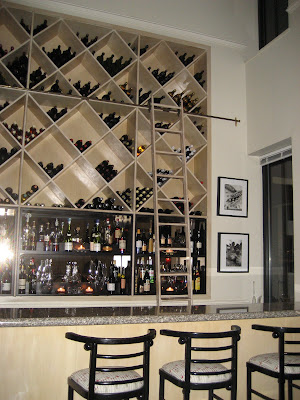 Tuesday, June 15, 2010"Chef, cookbook author, television personality, and tireless entrepreneur, Charlie Trotter has been a food luminary for two decades, thanks to a combination of sterling technique, minimalist sensibility, and a highly inventive approach in the kitchen. He devises arresting combinations of ingredients - grilled squid with tapioca and Meyer lemon, veal tenderloin with pickled garlic and spiced date - and he is relentless in his quest for freshness; there's no walk-in cooler in his kitchen, because holding food over could encourage cheating. Three multi-course tasting menus, which change daily, feature pristine products at the height of their season.
Trotter is uncompromising about the quality of the food he serves as well as about the service itself, which helps explain why a reservation for any of the 28 tables at Charlie Trotter's is one of the toughest tickets in town. Among the devoted epicures, you might find CEOs and celebrities:: Local icon Michael Jordan has come to dinner, as has Sweden's King Carl Gustaf (an aspiring recreational chef himself, he later invited Trotter to share some of his secrets).

Trotter offers a raw menu as well. There are four dining rooms (and over 40 china patterns throughout), including the studio kitchen, where you can watch your meal being prepared on closed-circuit TV. The most coveted seats in the house are at the kitchen table - you can watch art in the making. The wine list, featuring over 1,800 wines housed in four cellars, is renowned as one of the world's best.

If you can't wait for that kitchen table or don't have the proper attire (jacket required), visit Trotter's To Go, a gourmet take-out retail store in the neighborhood, or Trotter's To Go Express in the downtown area. Trotter has received worldwide accolades not only for his accomplishments in the kitchen, but for his philanthropic endeavors as well. Chief among them is the Culinary Education Foundation, which holds weekly tours and dinners for high school students and has raised nearly a half a million dollars for people seeking culinary careers in the culinary arts."
It was approximately 8:30pm, and as I approached the vine-covered, seemingly tucked-away, charming, brick building to check the address number, a well-dressed young man acknowledged me, "I think you're in the right place, sir." Grinning, I replied, "I think so too." He opened the door and welcomed me out of the wet streets, into this cozy, converted apartment building in beautiful Lincoln Park. He took my umbrella and exchanged it for a number he handed me. Another gentleman took his place and led me though the bar, into the first dining room, up to the second floor, and seated me at comfortable corner in a dining room where smartly-dressed couples laughed and conversed, enjoying their decadent dishes. Between the twelve tables, I counted four attendants, expertly accommodating the fine patrons with the very best wines, inventive cuisine, and friendly banter. Even with all the elegant decor, fine china and fancy suits, the atmosphere was surprisingly more fun than formal. Laughter and conversation filled the air, as I observed multiple tables introducing themselves and sharing stories. At one point I found myself snapping a couple photos for a pair of friends wanting to make some memories.

Of the two prix-fixe, 8 course menus I was presented, I chose the Vegetable menu. Like Arun's, with each course would come a new set of dinnerware, and a pleasant description of the dish. The menu I received consisted of the following courses:

Lastly, they surprised me with a tray of three very different candy morsels. If memory serves me correctly, the first was a scoop of dark chocolate cream under raspberry bark, the second was a chocolate-tiered wafer crisp, and the third was a melt-in-your-mouth jellied cube, which looked exactly like my idea of Turkish delight come to life.

Now I know that seeing black olives in dessert #2 makes for an unexpected combination, but it was sincerely perhaps the best dessert I have ever had the pleasure of tasting. Honestly, in that moment I pictured myself back in my motel room helping myself to a heaping bowl of this tart concoction, letting myself go. It was heaven on a spoon!

My experience did not end after emptying my wallet. Following my dinner experience was a full tour of the kitchen and its adjacent private dining room that I was offered upon making my reservation. I even received what the chef giving me the tour said was the only showing of their wine cellars he recalls them ever giving! And man, did I see some wines! Very rare, old, expensive wines in very expensive cases, and he pointed out to me Charlie's private stock, which only the very fortunate of his guests should ever get to taste. Why the special treatment? Well, I assume it's because usual guests aren't interested in seeing a kitchen, but more than that I think it's because he thought I could be a very important person; seeing as I was dining alone and savoring the three hour experience, one could easily assume me to be a critic. It was the perfect end to a perfect evening.

After humbly snapping a few photos and making my way toward the exit, the greeter from earlier reminded me of the umbrella I forgot I had checked. God they're good.


*Some of the images are dark - using flash in a fine restaurant is just a bit of a faux pas, lol =)