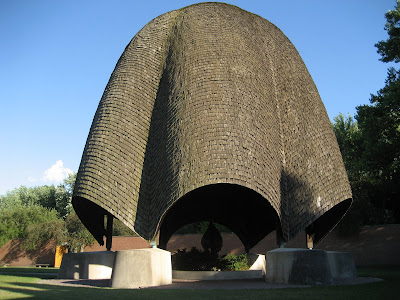 "Located on the banks of the Wabash River near the southwest tip of Indiana, New Harmony exemplifies the peaceful nature and simplicity implied in its name. The perfectly preserved microcosm of 19th-century architecture was founded in 1814 by German Lutheran George Rapp, who traveled here from Pennsylvania with his followers to await the Final Judgement. Their society stressed Christian perfection through orderly, productive lives, and the new residents of the self-sufficient settlement soon built more than 180 log, wood-frame, and brick structures. After 10 years, however, Rapp became discouraged with the effort declared that God wanted him to return with his followers to Pennsylvania. In 1825, Robert Dale Owen, a wealthy Welsh industrialist and social theorist, bought the entire town in order to establish America's first Utopian community - one built on free education, strong intellectual and scientific curiosity, and the abolition of social classes.

The legacies of both these communities remain. Built in 1815 during Rapp's time, the Harmonist Labyrinth is one of the oldest in North America. A small grotto enclosed by hedges grown in a concentric, circular design, harmonists considered it a symbol of the difficult paths in life that must be encountered before reaching ultimate harmony and perfection. Another example in town, the Cathedral Labyrinth, is a rose-granite maze patterned after the famous Chartres Labyrinth in France.

Designed by Philip Johnson and built in 1960, the nondenominational sanctuary known as the Roofless Church was commissioned by Jane Blaffer Owen to convey her belief that 'only one roof, the sky, could embrace all worshiping humanity.' A bronze sculpture by the famed Cubist Jacques Lipchitz sits under a sweeping domes canopy, and gates of his design lead to a garden and sculpture courtyard.

Guided tours of New Harmony - a compact, easily walkable community of fewer than 900 people, meander past log cabins and historic structures like the 1830 Owen House. They begin at the Atheneum/Visitor's Center, named for Athena, Greek goddess of wisdom and the arts. The angular white building, designed by internationally known architect Richard Meier in the late 1970s, houses a rooftop conservatory, a theater, and educational exhibits about New Harmony's history."

The visitor center was going to be closed by the time I arrived, but the lady over the phone was nice enough to enclose the walking tour map in an envelope and leave it for me on the porch of the center. I opened the map and got started. I walked almost the whole town on foot, with hardly any trips to the car to relocate to a different area. This is an interesting town! Quaint, quiet, unusual. The Roofless Church is cool, the Harmonist Labyrinth is quintessential, and the Atheneum Visitor's Center is completely out of place and looks like something from a Tim Burton film, which I really like. After experiencing all the town's offbeat mishmash of history I decided to take a little peek inside the Red Geranium Restaurant. I walked down the hallway of fancy art and arrived at the host stand where I was allowed to snap a couple photos of the cozy, upscale dining room, then I entered a doorway that transported me to an English pub, where I and the other patrons oohed and awed as we swore we found monkeys and faces in the awesome mural walls and ceiling, and where I listened to the very formal and courteous bartender give us a little history of the town, all over a super delicious plate of pasta and the best sweet butter and rolls I've ever had. I felt like Frodo in the shire! I love this little community, and I'm so glad I was able to experience it.