Parke County, IN: "Covered Bridge Capital of the World" 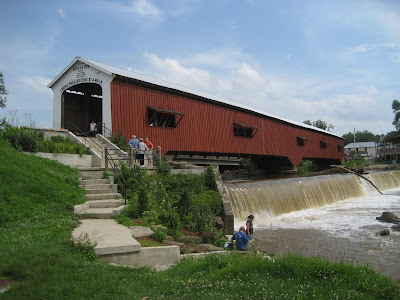 Parke County, IN: "Covered Bridge Capital of the World"

"Iowa can boast about its bridges of Madison County, but he lesser-known Parke County in west-central Indiana still proudly maintains its unofficial role as the covered bridge capital of the world. More than 10,000 of the roofed wooden structures were built in the U.S. by 1885; more than 90 percent of them are now gone. Thirty remain here, listed on the National Register of Historic Places (22 others were lost by natural disaster or arson, or dismantled before the days of preservationism).

Although covered bridges such as Bridgeton - which, with its companion mill and waterfall, is perhaps the most photographed bridge in the entire Midwest - are admired today as idealized reminders of bygone times, they were quire practical in the late 1800s and 1900s. They provided shelter from the elements and comfort to horses skittish about crossing rushing water. They often served as outdoor settings for picnics, parties, and even wedding receptions. Most romantically, they were especially convenient for courting couples back in the days of horses and buggies - the nickname "kissing bridges" was born from the rare but of privacy they offered.

The town of Rockville's courthouse square serves as headquarters for the Covered Bridge Festival in October. Small towns throughout the county each stage their own arts and crafts activities and entertainment. Take a color-coded bus or self-guided driving tour for an overview, and then pick your favorite area and explore it in detail. The oldest, Crooks bridge (c. 1856); the newest, Nevins Bridge (c. 1920); and the shortest, Phillips Bridge (43 feet), all span Little Raccoon Creek. At Sugar Creek, the West Union Bridge is the longest, measuring 315 feet."

I called ahead and the woman I spoke with over the phone informed me they would be closed by the time I arrived at the visitor center, but no worry, because the maps of the self-guided routes were located in a box outside the center =) Yay! I arrived at the center and grabbed a map, snapped a couple photos and got started. So many bridges, so little time...I took the Red Route from Rockville through Bridgeton to Rosedale.