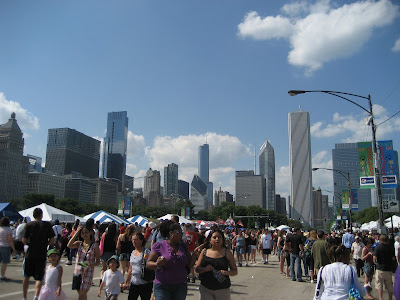 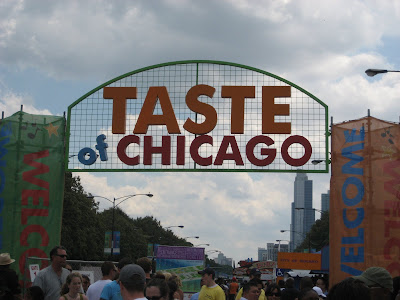 Taste of Chicago: "The Super Bowl of Cookouts"

"Chicago is serious about food. The city is deservedly famous and not just a little bit fanatical about its own versions of pizza and hot dogs, as well as Italian beef sandwiches, ribs, and Polish sausage. It's the home of Eli's cheesecake, the birthplace of Twinkies, and the place where Wonder Bread was launched as an archetypal national brand. For decades beginning in 1883, the Near North Side was the site of a meat market run by a Bavarian immigrant named Oscar Mayer, and it was in a Chicago suburb that the first McDonald's franchise opened in 1955. This prodigious appetite for legendary food of various shapes and flavors is center stage during Taste of Chicago, one of the world's largest and most fun food festivals.

"The Taste" began in 1980 as a one-day Fourth of July celebration when 36 vendors spread out along three blocks of Michigan Avenue. Hugely popular from the start, the cookouts to end all cookouts moved, appropriately, to the city's front yard, Grand Park. It's now a 10-day affair with 70 restaurants featuring a wide range of ethnic and traditional cuisine, and judging from the crowds-totaling 3.5 million people-attendance is mandatory. Everything is laid out through the heart of the park, and a pavilion by the Buckingham Fountain offers cooking demonstrations throughout each day of the festival."

Food consumed
- Fish taco and a roasted veggie taco by Carbon - seriously, the veggie taco was the best taco I've ever eaten! SO good!

- Mustard-fried catfish by BJ's Market and Bakery - a bit dry

Live music listened to (or attempted):
1. Some All-American /kinda country band - it was good, and a stranger complimented my awesome camping chair with foot rest =)
2. Salt-n-Pepa - Even arriving nearly an hour early for your concert I couldn't get a remotely decent seat, so screw you guys! hee hee =)

After giving up on attending the Salt-n-Pepa concert I went to Millenium Park for their classical music series. One problem: they moved it inside because the dumb Salt-n-Pepa concert was too loud. Am I going to spend my last evening in Chicago indoors? No way! I went to North Avenue Beach instead (my third attempt, since all the parking lots were full and there was absolutely no parking available even remotely close to the beach the other days). I took the bus today, and didn't have to worry about the ridiculous parking problem Chicago presents - of course, today, since everyone was at The Taste, the beach was nearly barren and free parking was abundant. Go figure. The beach was nice, and I practically had it all to myself, before a bunch of smokers decided to plant themselves right next to me (of all the places they could have sat, I think life was pranking me today).

Thanks Chicago for your food, architecture, museums, beaches and attractions - I could pass on your obscene traffic, insane drivers, tollways, and high cost of living. Next up: Michigan!