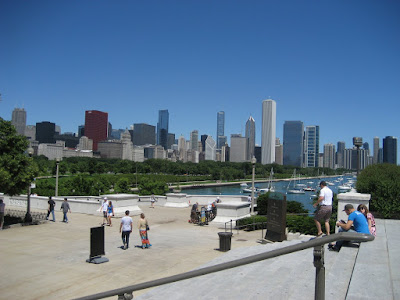 Saturday, June 12, 2010Tonight I arrived in the Windy City, or less-popularly nicknamed, "Second City." Two possible reasons (I believe the first one is accurate, but it offends the locals so they came up with the second one) Nickname origin 1: This was a derogatory nickname for the city used in a 1950s New Yorker article by A. J. Liebling - Chicago comes in second to New York City.
Nickname origin 2: Chicago received the nickname "Second City" in the late nineteenth century after being rebuilt from the great Chicago fire of 1873.

Sunday, June 13, 2010Anywhoski, the first thing in the morning I headed to the Chicago Architecture Foundation where I became a member, and since I joined as a student, I received a discounted student rate membership for $35, which out of the EIGHTY FIVE tours they give from $12 on up a pop, if I do just 3 tours (more than 65 tours are free to members!) I've already made my money back.
I wanted to jump right in and get to know Chicago, so I did TWO 2-hour walking tours!  First I did the Modern Skyscrapers (1950s-present). "Explore the history of modern design, from the simplicity of Mies can der Rohe through contemporary designs by Helmut Jahn, Skidmore, Owings & Merrill and more." We'll examine 3 periods of architecture on this tour: Modernist (50s, 60s, 70s), Post-Modern (80s and 90s), and New Modern/Millennium (2000 and up).

Secondly I did the Historic Downtown (south loop): Rise of the Skyscraper. "Trace the development of the first skyscrapers and learn how they transformed the world's commercial landscape." We'll examine 3 types of architecture on this tour: Pre-Fire construction, Chicago School Skyscrapers, and Art Deco Skyscrapers.