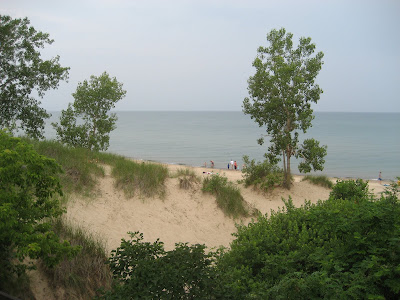 "The dunes are to the Midwest what the Grand Canyon is to Arizona, the poet Carl Sandburg once wrote. They constitute a signature of time and eternity. Here in Indiana, they rise along a 45-mile stretch of shoreline on Lake Michigan, and 13 of these miles are protected within the boundaries of national and state parks.

Families come to bask on the golden quartz-sand beaches that fringe the deep blue expanse of water. Sailboats bob in the distance; graceful white gulls soar high overhead; and if you listen carefully as you walk along the beach, you might hear the musical, tuning-fork-like hum created by the friction of superfine wet sand underfoot.

Indiana's unexpected sand dunes and beaches are a unique ecosystem for plants and wildlife. In fact, the 15,000 acre coastal area that dates back 12,000 to 14,000 years to the last glacial melt is widely regarded as 'the birthplace of ecology.' In 1899, botanist Henry C. Cowles did landmark research here, and other scientists and environmentalists followed, all proclaiming the uniqueness of this living botanical laboratory and the need to preserve it for future generations. Today, environmental education and research remain a focus of the Indiana Dunes National Lakeshore's mission and outreach.

This is a magical place bursting with more than 1,400 plant species, including 90 that are threatened or endangered. Ranking seventh among the 380 national parks in terms of biodiversity, the landscape runs the gamut from sane dunes, swamps, and tallgrass prairies to deciduous forests, trout-filled streams, and areas with such diverse vegetation as orchids and prickly-pear cactus. Bird-watching is another prime pursuit, as more than 350 species of migratory birds have been spotted here.

In some places the sand dunes reach as high as 180 feet. One, a favored launching pad for hang gliders, is called Mount Baldy; here, on a clear day you can see the Chicago skyline to the west.

Located within the Lakeshore area is the 2,200-acre Indiana Dunes State Park, with 45 miles of multi-use trails for hiking, bicycling, horseback riding, and cross-country skiing when the dunes and surrounding area are covered with snow."

Next stop: The bridges of Parke County