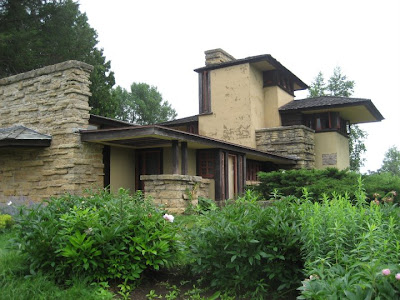 "Renowned architect and Wisconsin native Frank Lloyd Wright left an incredible legacy, from several notable homes new Chicago, to New York's Guggenheim Museum. But in Spring Green, on his 600-acre complex, you can visit Wright's own rambling 37,000-square-foot home and his original architecture school, an estate he tucked among the rolling hills of his childhood.

Wright espoused the importance of designing in harmony with the surroundings and using local materials, exploring his philosophy of "organic architecture." Taliesen (pronounced Tal-ee-ess-in) is the embodiement of Wright's tenets, its wimngs of limestine, wood, and glass meandering along the contours of the landscape. The name "Taliesen" is Welsh for "shining brow," reflecting the home's location along the "brow" of the hillside - enveloping, rather than overpowering, the site.

It served as his summer home, beginning in 1911 after leaving his first wife, Catherine Tobin, and his Oak Park, Illinois, home and studio in 1909.

The tour begins at the Frank Lloyd Wright® Visitor Center, the only free-standing restaurant designed by Wright. From there, the tour moves to Unity Chapel, built for Wright’s maternal family, where Wright’s gravesite is located. Next, the tour takes you to Hillside, the school that Wright designed for his aunts. At Hillside, you’ll explore the Assembly Hall, Fellowship Dining Room, Drafting Studio, the Theater and gallery space.

A country walk takes you past the Romeo and Juliet Windmill Tower, the oldest design on the estate. Next, you’ll get a close-up look at Tan-y-deri, the home Wright built for his sister Jane Porter, and Midway Barns en route to the house itself. Two hours into the tour, you’ll be served light refreshments on Mr. Wright’s Terrace before enjoying an exterior tour of his home. Finally, you’ll spend a delightful hour inside Taliesin.