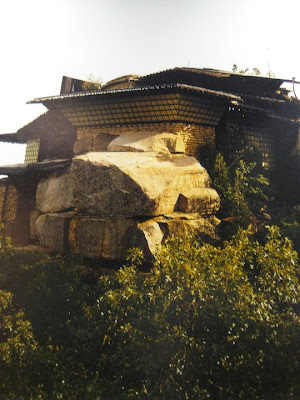 Today I revisited House on the Rock, in Spring Green, WI. This has been a long-time favorite attraction of mine. I'm surprised how little-known it is, but it gives me a bit of a thrill knowing that I know. My short description: Red and gold sets the stage for this mansion set atop (and inside) a cliff, boasting independently-themed, low-lit rooms/sections dedicated to displaying wonderfully diverse, odd, and unique collections from around the world. It's a gem!

Marketing version: "The House on the Rock is the grand vision of Alex Jordan, who believed that sights and sounds were the most effective means of stimulating the senses. He wanted guests to question his creation, to come to their own conclusions and to turn his world of dreams into their own. The Attraction has room after room of some of the world's most unique and eclectic collections which has amazed thousands of visitors each year."

The truth according to RoadsideAmerica.com: Alex Jordan, Jr. wanted to teach Frank Lloyd Wright a thing or two about architecture. The lesson started years ago.
Jordan's dad, a budding architect, had been dismissed at Wright's Taliesin home, near Spring Green, with the declaration, "I wouldn't hire you to design a cheese crate or a chicken coop." Soon after, the senior Jordan chose a pinnacle rock south of Taliesin to build a parody of Wright's fancy-pants architecture, a strange "Japanese house." The ceilings were dangerously low (padded now to accommodate tourists) and the structure seemed to cling precariously to the odd contours of the rock.

The House On The Rock opened to the public in 1961. Today, it is only a small portion of the magical collection that spits in the eye of Mr. Big Deal Dead Architect. When Alex Jordan, Jr. took over the project from his dad in the 1940s he never dreamed where it would end, but with a half-million visitors a year, it probably won't end anytime soon.

Big pseudo-oriental serpent planters greet you at the entrance and line the drive. Fake palm fronds lend shade to areas around the House. At the ticket window, cautious old people ask, "How many rest stops again?" The tour is self-guided, rumored to take four hours, and not air-conditioned. No amount of mall-walking prepares you for the strenuous, humid, HOTR experience. [Note: Since this story was written, the tour has been segmented into four separate tours]

The house itself is a claustrophobic shamble through darkened dens and hallways lit by Tiffany lamps. An automated band plays Bolero, the first of some thirty-five music machines on the route. There's oriental art, low ceilings, big fireplaces, and carpeting on everything. Was this place designed to be the ultimate bachelor's love nest?

Your climb to the top of the House begins. Waddling camcorderists clog the many choke points on landings and corners. Children are getting antsy; older people stand in the darkness and wheeze. The in the House play incessant make-out music: Harbor Lights, Hungarian Rhapsody and Love Theme from The Godfather.

Once you get out of the House the fun really begins. The Streets of Yesterday building is an indoor recreation of some murky Victorian era. Here, coin-operated music machines abound. Robotic fingers and invisible lips start at the drop of a token. We wonder -- are those magnificent instruments really being played, or is this a tape?

Next is "Heritage Of The Sea." This three-level blimp hangar-of-a- room is dominated by a 200-foot long sea monster battling a giant squid. Ship replicas and other flotsam line the ramp that climbs to the top of the chamber. People grip the railing, fixing their sights on the exit, far above.

Jordan's creations rivet visitors. "It must've cost him a million dollars." "No, no, he was an genius, an eccentric genius." "And they keep saying he was a poor man." "Well he never had any in his pocket since he was always buying things."

The next room has a display of Santa Claus items. And there's a rest area! Old people buttonhole employees and ask over and over "When is the next stop?" Then they start trying to get out. "When is the next exit?"

The Carousel Room wakes you up with a cacophony of music. The 239 carousel beasts, collected from around the world, are half-human and demonic looking; a runaway circus from Hell. Hundreds of topless mannequin angels hang from the walls and rotate overhead. The room contains 182 chandeliers. Exit via an open dragon mouth, and walk down its red shag-carpeted throat. More music machines suck tokens from the surviving oldsters, giving them an excuse to stop.

Next is the Organ Room, crisscrossed by catwalks and affording all possible camcorder angles of the huge theater organs, giant copper vats, and immense red glass chandeliers. After this, another exit point/grill/gift store/arts village store, with another hour advertised ahead of you. People may have been here for days. Some are dizzy. "Haven't we seen this before?" "Your grandma's gotta sit down."

We stagger to the Cannon Room. Camcorders have exhausted their batteries. Too bad, because this complex is dominated by the world's largest cannon, a weapon so absurdly large that the room had to be constructed around it. The Doll Room and Circus Room are a weary blur; we finally hobble to the welcoming glow of the gift shop.

Despite the globe-trotting aura of the collection, Jordan hated to travel and never left the country. He died in 1989, at age 75. The House continues under new management, smartly adding to the collection each year. But Jordan still seems the spiritual caretaker of HOR. A guide tells us that he had one girlfriend for 45 years who inherited most of his fortune, but who knows what to believe with this guy? He was 6'4", weighed over 200 lbs., and liked the coziness of the House On The Rock. It had to be a make-out pad."


World's Largest Carousel, and with the most number of lights on any carousel:


One of the many elaborate token-operated music machines - you have to tilt your head to the left for half of this; I didn't realize I wouldn't be able to rotate the video when posting it on here:


Close-up of the drummer's angry face - I think he lost his kitten:


Another one of the many elaborate token-operated music machines - you have to tilt your head to the right for this; I didn't realize I wouldn't be able to rotate the video when posting it on here: