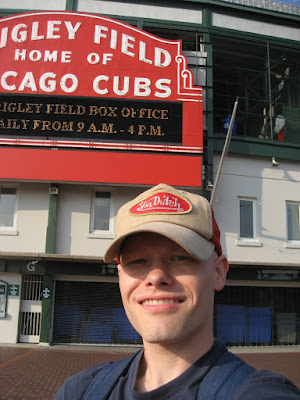 "When it opened on April 23, 1914, Weeghman Park was a typical stadium of its time, with seating angled close to the field and no upper decks or skyboxes. Today it's called Wrigley Field and there's no other place quite like it in baseball. Charles Weeghman built it for the Chicago Whales, a club in the short lived Federal League; when the upstart league disbanded after the 1915 season, he joined a group of investors to buy the National League Cubs and move them to his stadium - and thus began nearly a century of hardball history (and heartbreak) on Chicago's North Side. Chewing gum magnate William Wrigley gained full ownership of the team in 1919 and the ballpark was renamed Wrigley Field in 1926. It's the second oldest park in the majors, after Boston's Fenway Park and the only one remaining from the Federal League.

Upper deck and skybox seating have been added over the years to increase its seating capacity from the original 14000 to over 41,000 but Wrigley retains the intimacy that earned it the name "Friendly Confines." In 1937 the center field was was rebuilt in brick-fronted concrete with Boston ivy planted in front of it creating one of the park's most distinctive features; a hit lost in the dense leaves is an automatic ground-rule double. The 25-by75-foot manual scoreboard, one of the last two of its kind (along with Fenway's), was installed the same year - no batted ball has hit it yet - and postgame, a "W" or "L" flag still flies above it to announce the result to train commuters.

Wrigley had the first permanent concession stand in baseball (1914), the first organ (1941), and the first cell phone system between dugout and bullpen (2006). It was where fans were first allowed to keep foul balls hit into the stands, and where they first threw visiting teams' home-run balls back onto the field (a tradition that is strictly enforced by a jeering crowd). It was the last major league park to install lights for night games. It was reportedly where, in Game 3 of the 1932 World Series. Babe Ruth pointed to a spot in the center field bleachers just before sending a home run right there; and where legendary announcer Harry Caray led the crowd in the boisterous rendition of "Take Me Out to the Ballgame" during the seventh-inning stretch. It was also where the Bears, Chicago's football team, won eight league championships before Soldier Field became their home. What Wrigley has never seen is a World Series victory by the Cubs, who last won the fall classic in 1908, but their fans' contagious this-is-our-year hopefulness is a key part of the Wrigley experience.

In Wrigleyville, the neighborhood around the park, you'll find souvenir hawkers, street musicians, and loads of nightlife including, of course, sports bars; at perennial favorites such as Cubby Bear Lounge, there's an ongoing party, win or lose."