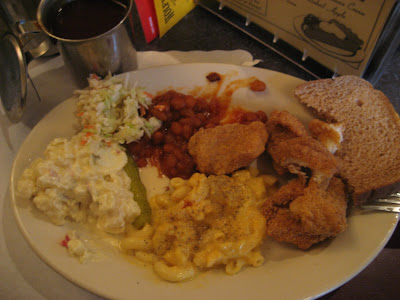 There are vinegar-doused meats in Memphis, Tennessee, mustardy sauces in South Carolina, hot and spicy marinades in Kansas City, and the sweet, ketchup-based goodness of Evansville, Indiana. If that doesn't grab you, just wait. At the local Wolf's Bar-B-Q, your taste buds are in for an even bigger shock.

Founded in 1927, the fourth-generation family restaurant is a landmark in Evansville - Indiana's third-largest city - and known throughout the state's southwestern region, near Illinois and Kentucky (whose barbecue capital is Owensboro just across the border from here). Wolf's platters of pit beef, pork, or chicken come with substantial squares of brown rye-like bread - suitable for use as a barbecue mop - and sides such as their famed homemade potato salad. Each week they sell more than 6,000 pounds of it, plus 6,000 pounds of pork, 400-500 pounds of beef, and 1,500 chicken halves - and even then it's barely enough to keep everyone happy.

Graze the buffet line or order from the vast menus at this cavernous, if nondescript, dining room. A separate entrance is busy at all hours of the day and night with take-out orders."

Okay, so maybe it's daring for a pescatarian (Of the meat family, I only eat eggs and fish) to brave a BBQ place, but of course I had to try this remarkable sauce people are raving about. I ordered the buffet and filled my plate with catfish, cole slaw, bbq baked beans, mac n' cheese, and bread. The catfish was tasty, and my peppy waitress brought me two of their popular bbq sauces. One was very hickory-tasting and yummy, and the other one was sweet and a little less thick. The food was good, but not amazing and not worth driving hundreds of miles out of the way for - but hey, now I know, lol!