Nashville and Story, IN: "Storybook Splendor in Brown County" 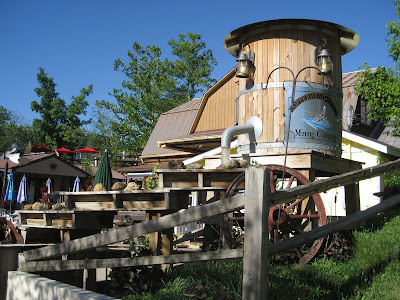 Nashville and Story, IN: "Storybook Splendor in Brown County"

"Wooded hills, log cabins, and pastoral back roads contribute to Brown County's exquisite scenery, notably in Brown County State Park (Indiana's largest) and the quaint towns of Nashville and Story. Trademarked as the 'Art Colony of the Midwest,' Nashville has both bohemian and an old-fashioned air. More than 300 galleries and shops sells everything from dulcimers and jewelry to garden ornaments and leather goods. Nashville's population of less than 1,000 balloons to more than 10 times that on any given fall weekend, when droves of tourists converge here to browse against the backdrop of brilliant foliage. Restaurants, B&Bs, and inns abound."

The Story Inn, the neighboring hamlet of the same name consists if a dilapidated former gas station and general store. It's surrounded by a cluster of 19th century clapboard cottages with tin roofs, all set on the edge of the vast Hoosier National Forest. The town flourished in the timber trade until the Depression, and when the U.S. Army Corps of Engineers created nearby Lake Monroe in 1960, what remained of Story was cut off essentially preserving its simplicity and charm for decades. Today, incredibly, only three residents remain, including the couple who own the Inn. Guests stay in the main inn and in several rustic homes - some with porch swings and hot tubs, but don't expect phones or TVs. A fresh, all-natural gourmet menu is served at the inn's nationally acclaimed turn-of-the-century restaurant in what used to be a general store."

I explored the Pioneer Village in Nashville then carried on.

"About 9 miles southwest of Nashville is the T.C. Steele State Historic Site, the former home and studio of Theodore Clement Steele, a well-respected American Impressionist landscape painter who is credited with nurturing the Nashville area as a magnet for artists. His paintings and the 211 acres that inspired them are open to tourists year-round."

It was after 5 and the place had closed, but did that stop me? Heck no! I have places to go and things to see, people! I was able to park at the driveway to the exit gate and I actually was able to spot a remaining staff person in the office building who agreed to let me explore the grounds. In one hand - a self-guided walking tour brochure with marked sites for the visitor to compare today's vistas and views with those depicted in Steele's paintings - in the other hand - my camera. It was a lot of fun seeing his historic paintings and comparing them to the view of the same sites through the lens of my camera. See for yourself by checking out my photos. I then visited the lovely Story Inn, where I took my own little peek into the rooms and glanced at framed newspaper articles above the stairs about Story Inn and the restaurant and the legends of ghosts on the property.